Heat shock proteins (Hsps), amongst them, Hsp70 and Hsp90 families, serve mainly as facilitators of protein folding (molecular chaperones) of the cell. The Hsp70 family of proteins represents one of the most important molecular chaperones in the cell. Plasmodium falciparum, the main agent of malaria, expresses six Hsp70 isoforms. Two (PfHsp70-1 and PfHsp70-z) of these localize to the parasite cytosol. PHsp70-1 is known to occur in a functional complex with another chaperone, PfHsp90 via a co-chaperone, P. falciparum Hsp70-Hsp90 organising protein (PfHop). (−)-Epigallocatechin-3-gallate (EGCG) is a green tea constituent that is thought to possess antiplasmodial activity. However, the mechanism by which EGCG exhibits antiplasmodial activity is not fully understood. A previous study proposed that EGCG binds to the N-terminal ATPase domain of Hsp70. In the current study, we overexpressed and purified recombinant forms of two P. falciparum cytosol localized Hsp70s (PfHsp70-1 and PfHsp70-z), and PfHop, a co-chaperone of PfHsp70-1. Using the surface plasmon resonance approach, we demonstrated that EGCG directly binds to the two Hsp70s. We further observed that binding of EGCG to the two proteins resulted in secondary and tertiary conformational changes. In addition, EGCG inhibited the ATPase and chaperone function of the two proteins. Furthermore, EGCG abrogated association of the two Hsp70s with their functional partners. Using parasites cultured in vitro at the blood stages, we observed that 2.9 µM EGCG suppressed 50% P. falciparum parasite growth (IC50). Our findings demonstrate that EGCG directly binds to PfHsp70-1 and PfHsp70-z to inhibit both the ATPase and chaperone functions of the proteins. Our study constitutes the first direct evidence suggesting that the antiplasmodial activity of EGCG is at least in part accounted for by its inhibition of Hsp70 function. View Full-Text
Keywords: malaria; Plasmodium falciparum; (−)-epigallocatechin-3-gallate; PfHsp70-z; PfHsp70-1; molecular chaperone; functional associates; inhibitor malaria; Plasmodium falciparum; (−)-epigallocatechin-3-gallate; PfHsp70-z; PfHsp70-1; molecular chaperone; functional associates; inhibitor
►▼ Show Figures 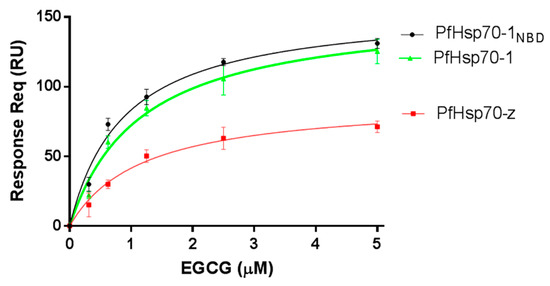