Synthesis of Disaccharide Nucleosides Utilizing the Temporary Protection of the 2′,3′-cis-Diol of Ribonucleosides by a Boronic Ester

O6-Alkylguanine-DNA alkyltransferases (AGTs) are proteins responsible for the removal of mutagenic alkyl adducts at the O6-atom of guanine and O4-atom of thymine. In the current study we set out to understand the role of the Ser134 residue in the Escherichia coli AGT variant OGT on substrate discrimination. The S134P mutation in OGT increased the ability of the protein to repair both O6-adducts of guanine and O4-adducts of thymine. However, the S134P variant was unable, like wild-type OGT, to repair an interstrand cross-link (ICL) bridging two O6-atoms of guanine in a DNA duplex. When compared to the human AGT protein (hAGT), the S134P OGT variant displayed reduced activity towards O6-alkylation but a much broader substrate range for O4-alkylation damage reversal. The role of residue 134 in OGT is similar to its function in the human homolog, where Pro140 is crucial in conferring on hAGT the capability to repair large adducts at the O6-position of guanine. Finally, a method to generate a covalent conjugate between hAGT and a model nucleoside using a single-stranded oligonucleotide substrate is demonstrated. View Full-Text
Keywords: Bioorganic molecules; modified oligonucleotides; DNA repair; substrate specificity; mutagenesis; homology modeling; DNA interstrand cross-link Bioorganic molecules; modified oligonucleotides; DNA repair; substrate specificity; mutagenesis; homology modeling; DNA interstrand cross-link
►▼ Show Figures 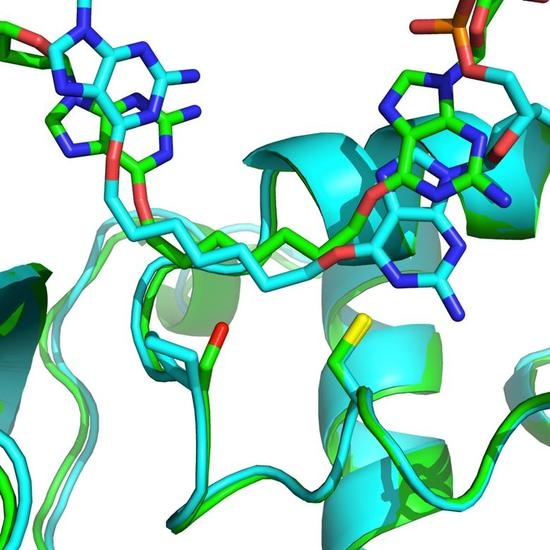