Interleukin-34 (IL-34) was initially identified as an alternative ligand for the colony-stimulating factor-1 receptor (CSF-1R) to mediate the biology of mononuclear phagocytic cells. Recently, IL-34 was found to be associated with chronic inflammation, such as in rheumatoid arthritis (RA). Both RA and systemic lupus erythematosus (SLE) are multifactorial autoimmune diseases and are characterized by excessive immune and inflammatory responses. Thus, we investigated whether IL-34 is involved in the pathogenesis of SLE. In all, 78 SLE patients and 53 healthy controls were enrolled in the research. Enzyme-linked immunosorbent assay (ELISA) was employed to measure the concentrations of serological IL-34. Then serum IL-34 levels between the SLE group and healthy controls were analyzed by the Mann-Whitney U test. Meanwhile, the correlations between the serum IL-34 levels and disease activity indexes and other established serum markers were assessed. Furthermore, the serum IL-34 levels of 20 active SLE patients were reevaluated when diseases were in the remission stage from corticosteroids or immunosuppressive drugs. Serum IL-34 levels were significantly higher in SLE patients compared to healthy controls. Their levels were remarkably associated with accumulation of the clinical features of SLE. Additionally, IL-34 titers were positively correlated with the SLE disease activity indexes, anti-double-stranded DNA antibody (anti-dsDNA) titers and C-reactive protein (CRP) levels, and inversely with complement3 (C3) levels. Moreover, serum IL-34 levels were significantly decreased after successful treatment of SLE. Serum IL-34 could be a candidate biomarker for SLE as there are elevated serum levels in treatment-naive SLE patients and we saw a significant decrease after effective treatment.
Keywords: systemic lupus erythematosus; SLE; interleukin-34, IL-34; activity index; immune biomarker systemic lupus erythematosus; SLE; interleukin-34, IL-34; activity index; immune biomarker

Systemic lupus erythematosus (SLE) is a heterogeneous multi-systemic autoimmune and inflammatory disease characterized by the polyclonal activation of T and B lymphocytes, the production of autoantibodies, and the formation of immune complexes that result in tissue and organ damage and are eventually associated with considerable morbidity and mortality [1,2]. Its diversity of clinical manifestations is matched by the complexity of the factors (genetic, hormonal and environmental) that cause it, and the array of autoantibodies with which it is associated. However, the precise cellular and molecular mechanisms leading to SLE, and real factors that determine which organs are involved, remain poorly understood. Hence, SLE still remains a remarkable and challenging disorder.
Initially identified in 2008, interleukin-34 (IL-34) is the second colony-stimulating factor-1 receptor (CSF-1R) ligand and shares the receptor Fms with macrophage colony-stimulating factor (M-CSF) [3,4]. Notably, IL-34 plays pivotal roles in the proliferation and differentiation of mononuclear phagocyte lineage cells, osteoclastogenesis, development of Langerhans cells and microglia, and inflammation [5,6]. Recent study revealed that IL-34 plays important roles in the pathogenesis of chronic inflammations such as in rheumatoid arthritis (RA) [7,8,9,10]. Both SLE and RA are systemic autoimmune diseases and they share many common features and clinical presentations. Thereby, we made an effort to investigate whether IL-34 is involved in the pathogenesis of SLE.

2.1. The Demographic and Clinical Characteristics of Study Subjects

2.2. The Serum IL-34 Levels Were Elevated in Patients with SLE

2.4. The High Titers of Serum IL-34 Were Associated with the Accumulation of the Clinical Features of SLE

Recently, interleukin-34 (IL-34) was identified as an alternative ligand of colony-stimulating factor-1 receptor (CSF-1R) which is structurally related to CSF-1 but bears no sequence homology with CSF-1 [11,12]. IL-34 binds to CSF-1R at the cleft between D2 and D3 [13]. Besides, IL-34 could bind especially to the extracellular domain of receptor-type protein-tyrosine phosphataseζ (PTP-ζ) [14] and chondroitin sulphate [15].
IL-34 promotes the differentiation and survival of monocytes and macrophages which are the predominant infiltrating cell types in the inflamed synovium and produce inflammatory cytokines such as tumor necrosis factor (TNF) α and interleukin-6 (IL-6) [16]. Besides, IL-34 itself was shown capable of inducing proinflammatory cytokines and chemokines such as IL-6 and interleukin-8 (IL-8) [17]. Furthermore, accumulating evidence suggested that the CSF-1R pathway played a crucial role in chronic immune disorders such as RA, Sjogren’s syndrome (SS) [18] and lupus nephritis (LN) [19]. However, whether IL-34 is involved in the immunopathogenic process of systemic lupus erythematosus (SLE) is still unexplored in animal models and cell experiments. Therefore, we conducted this clinical study to investigate whether IL-34 is involved in the pathogenesis of SLE. Our study confirmed that serum IL-34 levels are significantly elevated in SLE patients, especially in active SLE patients. This is the first time that our study brings insight into the relationship between serum IL-34 levels and SLE disease activities, as well as clinical features. For example, serum IL-34 levels correlated with SLEDAI, anti-dsDNA Ab, CRP and C3. In particular, SLEDAI was most frequently used to assess SLE disease activity [20]. CRP is the acute-phase reaction protein and is elevated in most active SLE patients. Therefore, the IL-34-SLEDAI and IL-34-CRP correlations suggested that IL-34 is involved in SLE evolution. Likewise, anti-dsDNA antibodies are essential to SLE pathology. Thus, IL-34- anti-dsDNA Ab indicated that IL-34 may play an important role in the pathogenesis of SLE. Moreover, serum IL-34 levels decreased significantly after disease amelioration by treatment. Though the sample size of active SLE patients is rather small, it is still plausible to hypothesize that IL-34 could be a useful biomarker for SLE disease activity and therapeutic effects. These findings also shed new light on the dysregulation of the immune system in autoimmune diseases.
Still, the length of follow-up was not long enough, so this study could not analyze the relationship between IL-34 and the long-term complications and survival parameters of SLE.
In conclusion, this study illustrated that the serum IL-34 levels were elevated in patients with SLE and were associated with lupus disease activity. It is likely that IL-34 is involved in the pathogenesis of SLE and could be a potential biomarker for SLE disease activity.

We performed a cross-sectional study. All SLE patients were consecutively recruited at The First Affiliated Hospital of Chongqing Medical University between the years of 2014 and 2015. Meanwhile, the healthy staff members for control were recruited from the physical examination center of The First Affiliated Hospital of Chongqing Medical University. Totally, 78 SLE patients and 53 healthy volunteers were enrolled. All of the SLE patients met at least four of the American College of Rheumatology (ACR) revised criteria [21]. Besides, we excluded SLE patients and healthy control with other autoimmune and infectious diseases, tumor, diabetes and obesity [2]. The SLE disease activity was measured according to the SLE Disease Activity Index (SLEDAI) and patients with SLEDAI score ≥6 were defined as active SLE [22].
Each SLE patients received a standardized medical history collection and physical examination. The serum samples of active and inactive SLE patients were collected before the initiation or reinforcement of treatment and during regular hospital visits respectively. The active SLE patients were treated with corticosteroids or immunosuppressive drugs initial evaluations. Specifically, the serum IL-34 levels of active SLE patients were reevaluated after effective treatment. Meanwhile, control sera were obtained from healthy staff members (n = 53). All the serum samples were preserved at −20 °C.
This study was approved by the ethics committee of our institution, and informed consent was obtained from all participants.

The information of SLE patients covered demographic data, such as age, sex, disease duration, clinical manifestations, and laboratory values. SLE-related features included malar rash/discoid rash, oral or nasal ulcers, alopecia, serositis, arthritis, active nephritis, CNS (central nervous system) lupus, vasculitis, fever >38 °C, thrombocytopenia, leukopenia, and anemia and were based on the SLEDAI except anemia [12]. For instance, anemia, thrombocytopenia and leukopenia were defined as a decrease in the concentration of hemoglobin to <100 g/L, in the number of platelets to <100 × 109/L, and in the number of white blood cells to <3 × 109/L. Moreover, the laboratory values of serum anti-double stranded DNA (anti-dsDNA) antibodies of SLE patients were measured.

All statistical analysis were achieved by SPSS 17.0. The index data of SLE patients and control group is skewed distribution (the Kolmogorov-Smirnov Test), so that Mann-Whitney U test was employed to analyzed the differences between two groups. The relations between IL-34 levels and other continuous variables were analyzed by using the Mann-Whitney U test as well. The IL-34 levels before and after treatment were compared by using a paired t test. Furthermore, the SLE patients were divided into three groups based on scores of clinical features (0, 1 to 2, and 3 to 8). Among three groups, p-values were calculated by analysis of variance and were adjusted by use of the Bonferroni correction. p-Values < 0.05 were considered significant.

The research work is supported by Chongqing Health and Family Planning Commission funding (2012-120-11).

All authors declare no conflicts of interest. 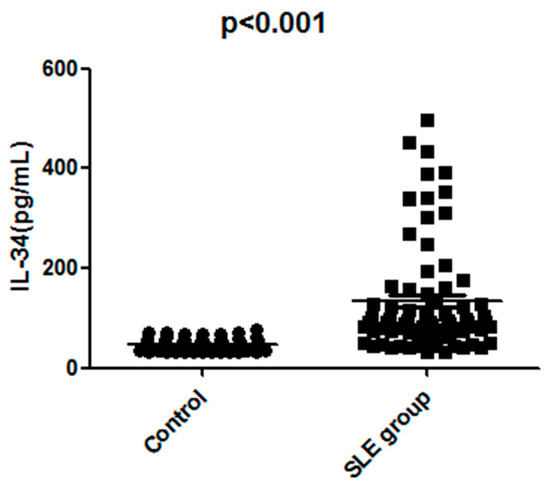 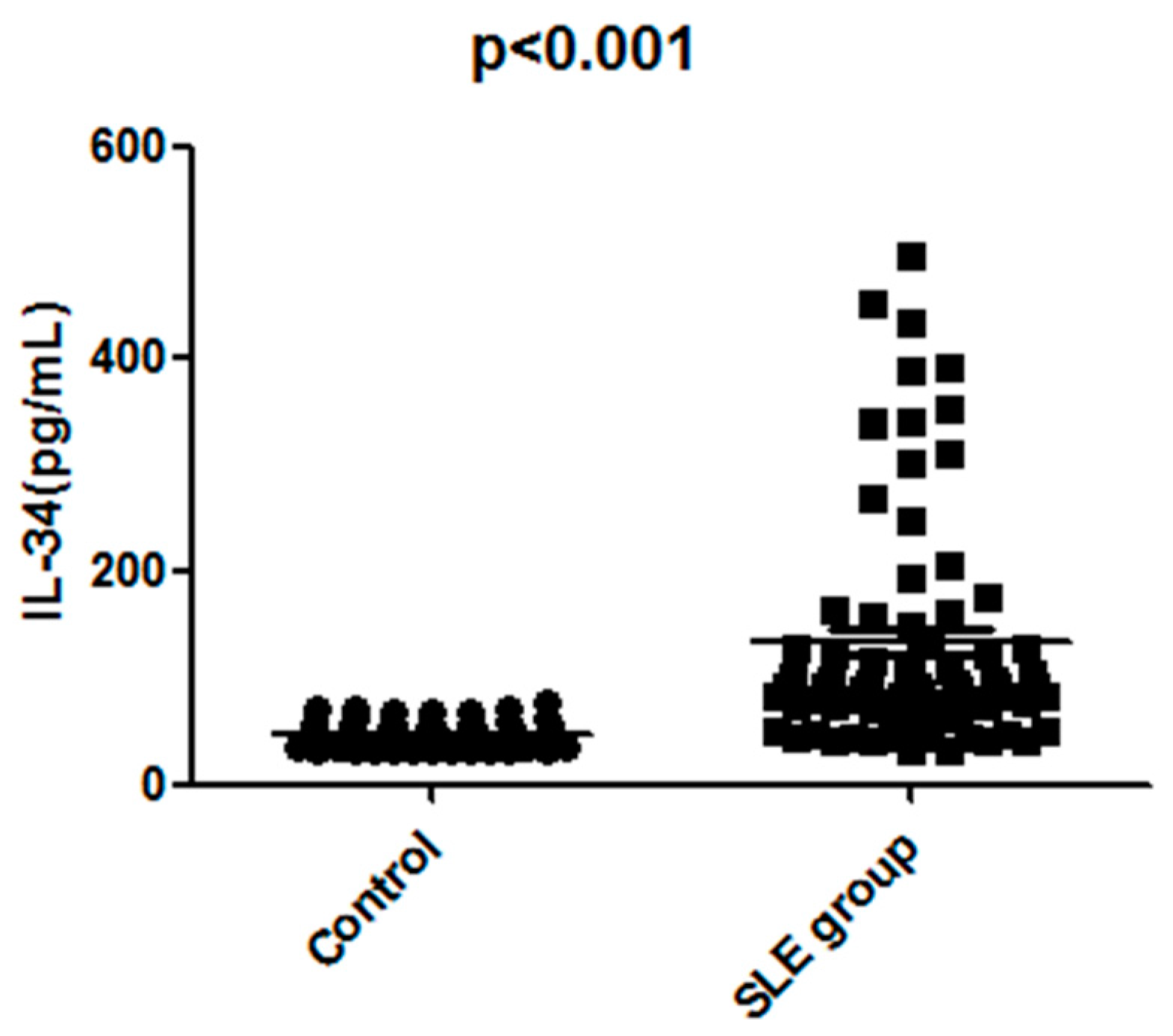 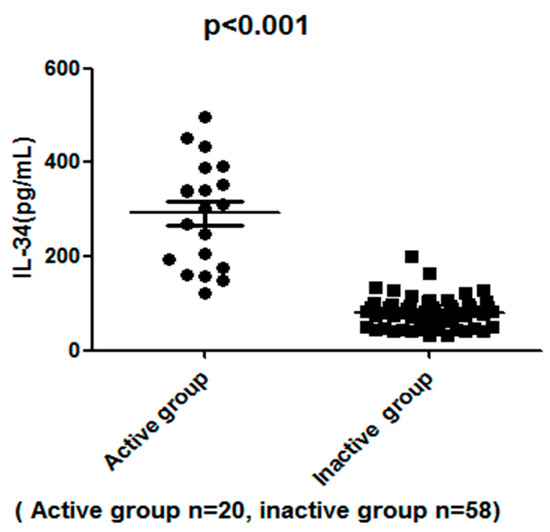 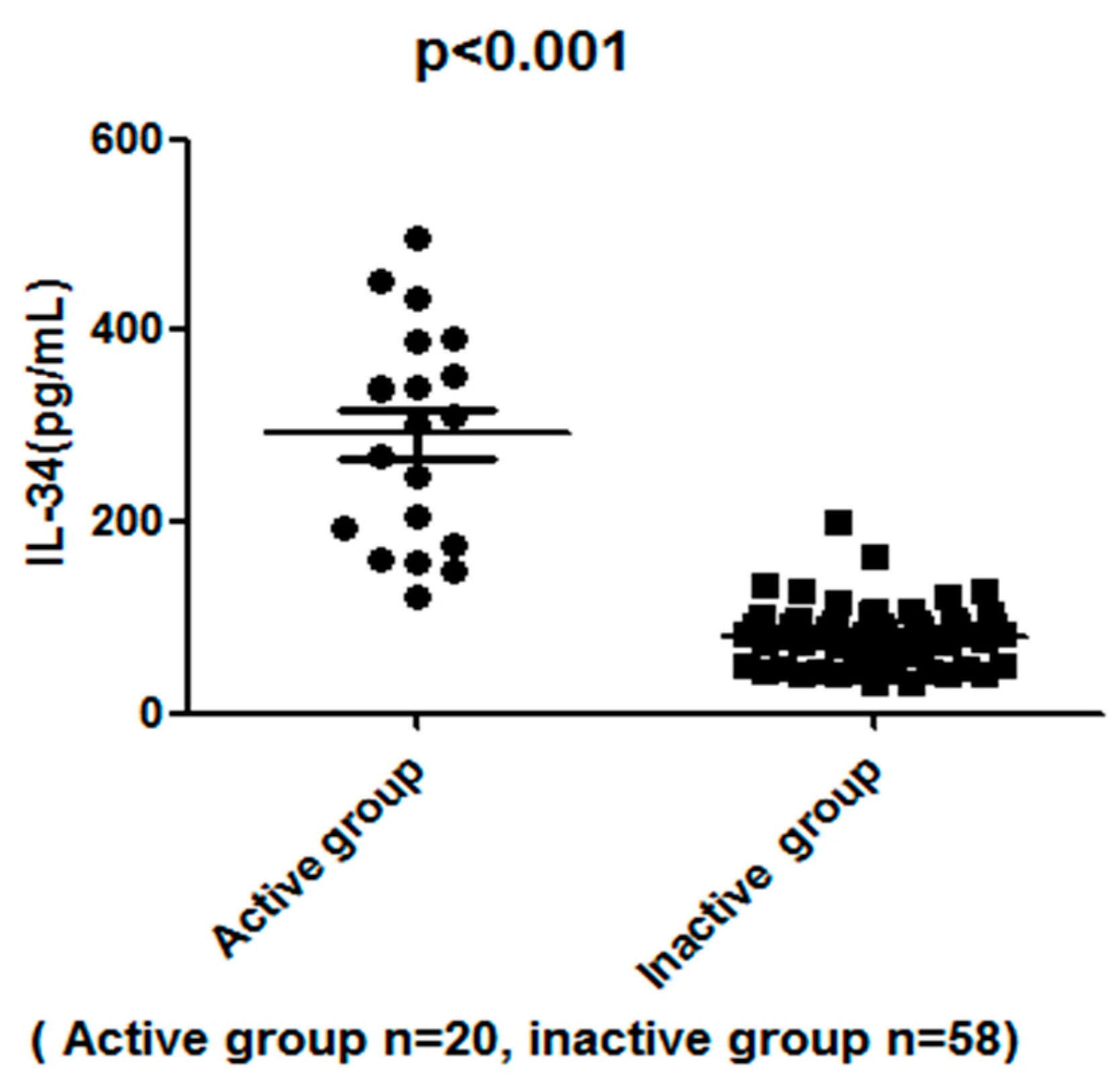 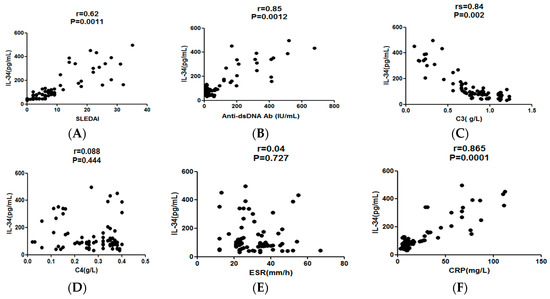 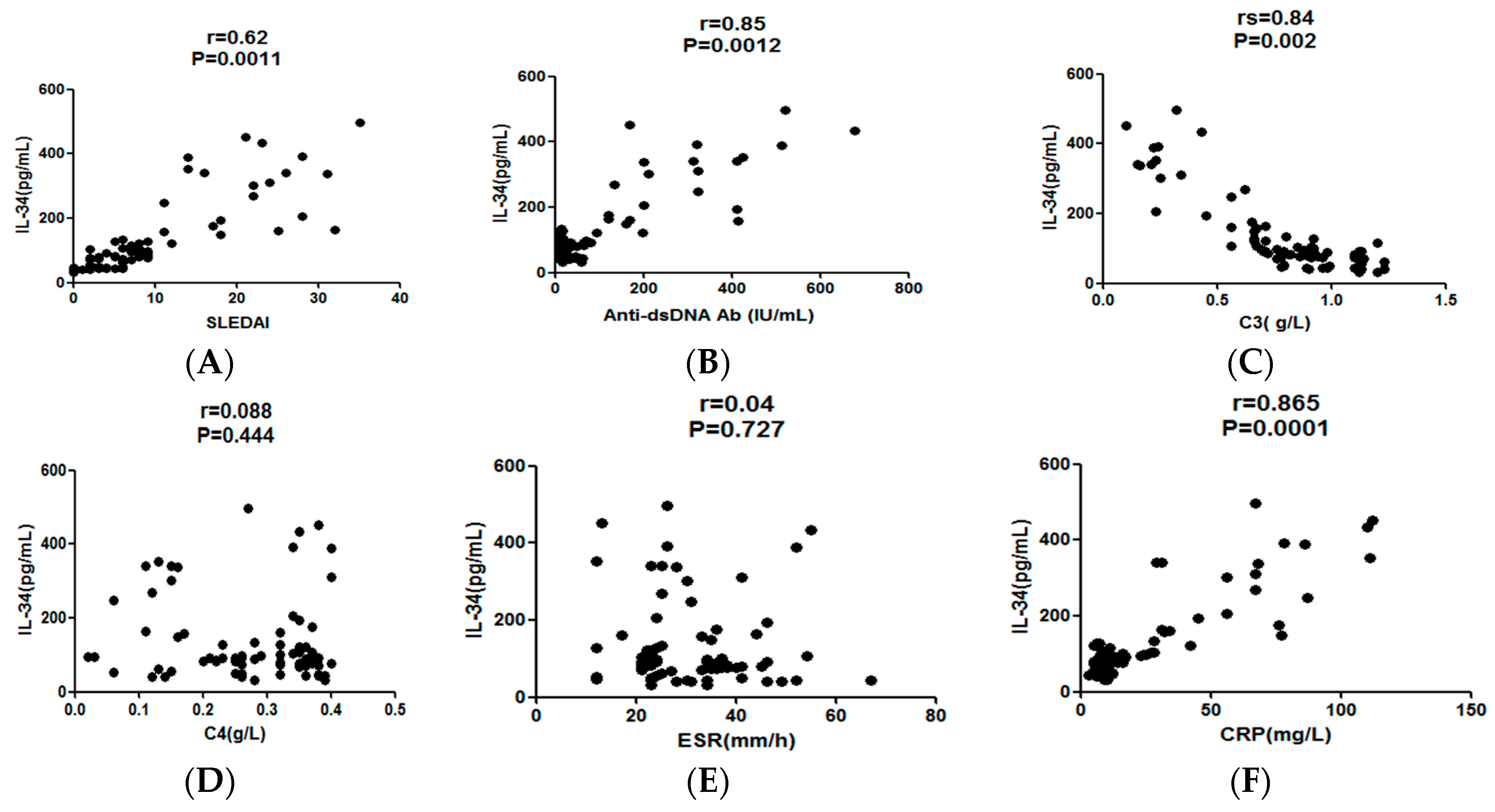 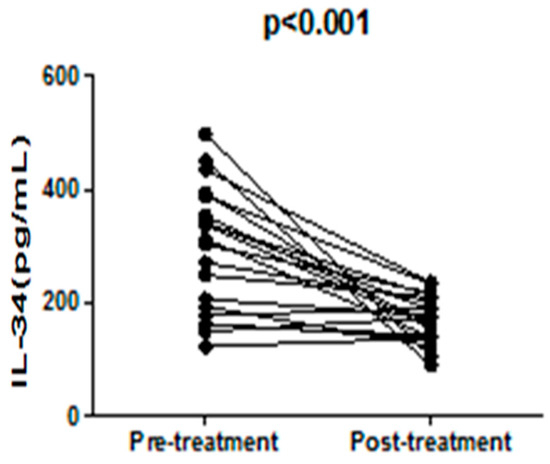 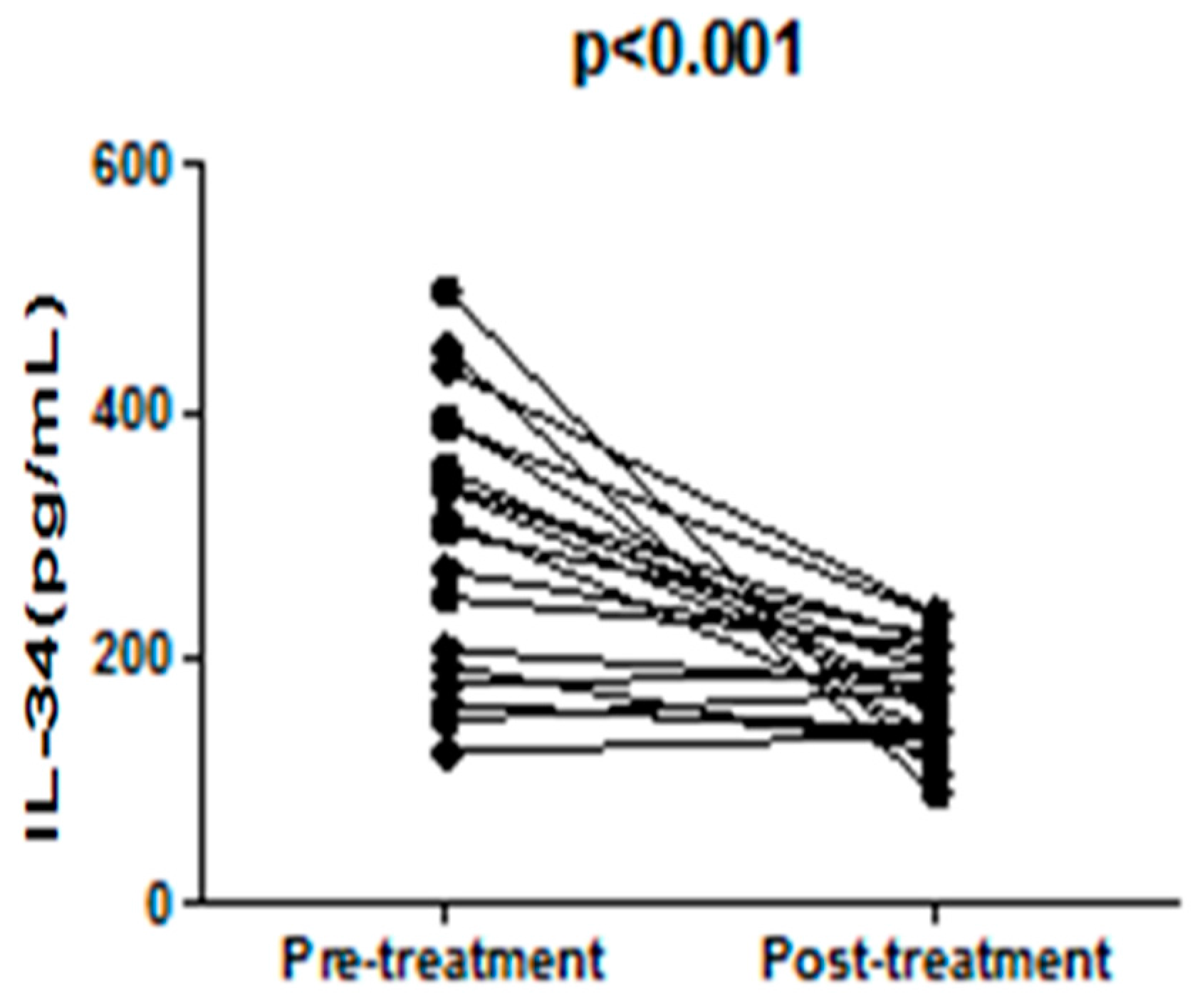