Evaluation of Biosynthetic Pathway and Engineered Biosynthesis of Alkaloids

Varieties of alkaloids are known to be produced by various organisms, including bacteria, fungi and plants, as secondary metabolites that exhibit useful bioactivities. However, understanding of how those metabolites are biosynthesized still remains limited, because most of these compounds are isolated from plants and at a trace level of production. In this review, we focus on recent efforts in identifying the genes responsible for the biosynthesis of those nitrogen-containing natural products and elucidating the mechanisms involved in the biosynthetic processes. The alkaloids discussed in this review are ditryptophenaline (dimeric diketopiperazine alkaloid), saframycin (tetrahydroisoquinoline alkaloid), strictosidine (monoterpene indole alkaloid), ergotamine (ergot alkaloid) and opiates (benzylisoquinoline and morphinan alkaloid). This review also discusses the engineered biosynthesis of these compounds, primarily through heterologous reconstitution of target biosynthetic pathways in suitable hosts, such as Escherichia coli, Saccharomyces cerevisiae and Aspergillus nidulans. Those heterologous biosynthetic systems can be used to confirm the functions of the isolated genes, economically scale up the production of the alkaloids for commercial distributions and engineer the biosynthetic pathways to produce valuable analogs of the alkaloids. In particular, extensive involvement of oxidation reactions catalyzed by oxidoreductases, such as cytochrome P450s, during the secondary metabolite biosynthesis is discussed in details. View Full-Text
Keywords: alkaloids; biosynthesis; enzymes; engineered biosynthesis; aromatic amino acids alkaloids; biosynthesis; enzymes; engineered biosynthesis; aromatic amino acids
►▼ Show Figures 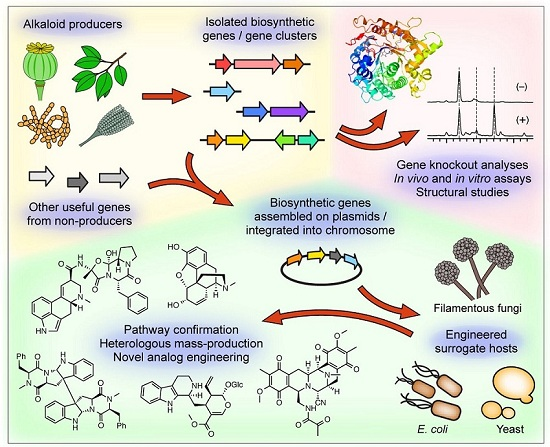