Synthesis, Anti-HCV, Antioxidant and Reduction of Intracellular Reactive Oxygen Species Generation of a Chlorogenic Acid Analogue with an Amide Bond Replacing the Ester Bond
Next Article in Special Issue

Lipase B from Candida antarctica (CALB) was immobilized on octyl agarose (OC) and physically modified with polyethyleneimine (PEI) in order to confer a strong ion exchange character to the enzyme and thus enable the immobilization of other enzymes on its surface. The enzyme activity was fully maintained during the coating and the thermal stability was marginally improved. The enzyme release from the support by incubation in the non-ionic detergent Triton X-100 was more difficult after the PEI-coating, suggesting that some intermolecular physical crosslinking had occurred, making this desorption more difficult. Thermal stability was marginally improved, but the stability of the OCCALB-PEI was significantly better than that of OCCALB during inactivation in mixtures of aqueous buffer and organic cosolvents. SDS-PAGE analysis of the inactivated biocatalyst showed the OCCALB released some enzyme to the medium during inactivation, and this was partially prevented by coating with PEI. This effect was obtained without preventing the possibility of reuse of the support by incubation in 2% ionic detergents. That way, this modified CALB not only has a strong anion exchange nature, while maintaining the activity, but it also shows improved stability under diverse reaction conditions without affecting the reversibility of the immobilization. View Full-Text
Keywords: reversible immobilization; interfacial adsorption; PEI modification; enzyme stabilization; enzyme physical intermolecular crosslinking reversible immobilization; interfacial adsorption; PEI modification; enzyme stabilization; enzyme physical intermolecular crosslinking
►▼ Show Figures 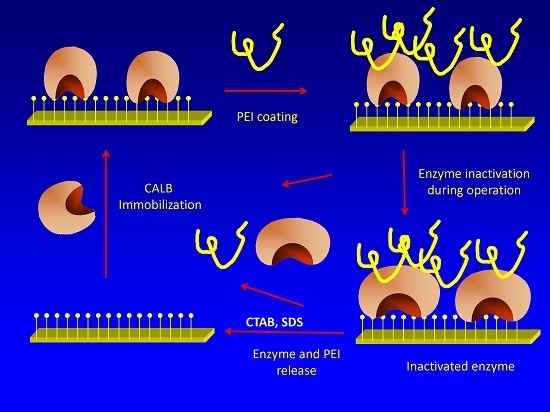