The Rationale for Insulin Therapy in Alzheimer’s Disease

Alzheimer’s disease (AD) is the most common form of dementia, with a prevalence that increases with age. By 2050, the worldwide number of patients with AD is projected to reach more than 140 million. The prominent signs of AD are progressive memory loss, accompanied by a gradual decline in cognitive function and premature death. AD is the clinical manifestation of altered proteostasis. The initiating step of altered proteostasis in most AD patients is not known. The progression of AD is accelerated by several chronic disorders, among which the contribution of diabetes to AD is well understood at the cell biology level. The pathological mechanisms of AD and diabetes interact and tend to reinforce each other, thus accelerating cognitive impairment. At present, only symptomatic interventions are available for treating AD. To optimise symptomatic treatment, a personalised therapy approach has been suggested. Intranasal insulin administration seems to open the possibility for a safe, and at least in the short term, effective symptomatic intervention that delays loss of cognition in AD patients. This review summarizes the interactions of AD and diabetes from the cell biology to the patient level and the clinical results of intranasal insulin treatment of cognitive decline in AD. View Full-Text
Keywords: Alzheimer’s disease; diabetes; insulin; cognition Alzheimer’s disease; diabetes; insulin; cognition
►▼ Show Figures 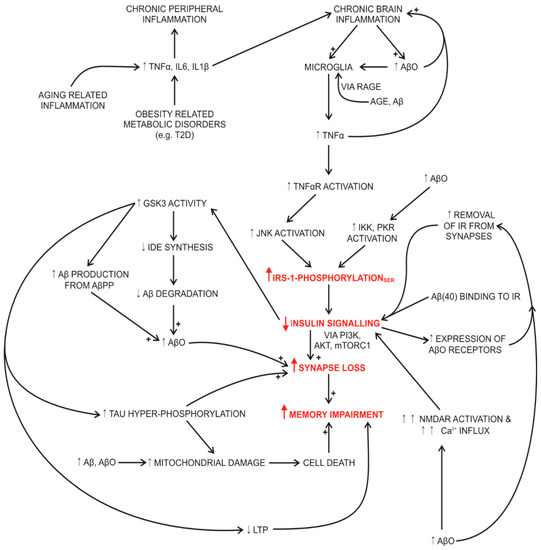