The Effects of Topical Application of Polycal (a 2:98 (g/g) Mixture of Polycan and Calcium Gluconate) on Experimental Periodontitis and Alveolar Bone Loss in Rats
Previous Article in Journal

Identification of Subnanometric Ag Species, Their Interaction with Supports and Role in Catalytic CO Oxidation

Luculia plants are famed ornamental plants with sweetly fragrant flowers, of which L. pinceana Hooker, found primarily in Yunnan Province, China, has the widest distribution. Solid phase microextraction-gas chromatography-mass spectrometry (SPME-GC-MS) was employed to identify the volatile organic compounds (VOCs) emitted from different flower development stages of L. pinceana for the evaluation of floral volatile polymorphism. Peak areas were normalized as percentages and used to determine the relative amounts of the volatiles. The results showed that a total of 39 compounds were identified at four different stages of L. pinceana flower development, including 26 at the bud stage, 26 at the initial-flowering stage, 32 at the full-flowering stage, and 32 at the end-flowering stage. The most abundant compound was paeonol (51%–83%) followed by (E,E)-α-farnesene, cyclosativene, and δ-cadinene. All these volatile compounds create the unique fragrance of L. pinceana flower. Floral scent emission offered tendency of ascending first and descending in succession, meeting its peak level at the initial-flowering stage. The richest diversity of floral volatile was detected at the third and later periods of flower development. Principal component analysis (PCA) indicated that the composition and its relative content of floral scent differed throughout the whole flower development. The result has important implications for future floral fragrance breeding of Luculia. L. pinceana would be adequate for a beneficial houseplant and has a promising prospect for development as essential oil besides for a fragrant ornamental owing to the main compounds of floral scent with many medicinal properties.
Keywords: Luculia; volatile organic compound; flower development; SPME-GC-MS; houseplant; floral scent Luculia; volatile organic compound; flower development; SPME-GC-MS; houseplant; floral scent

Luculia Sweet is a small genus of the family Rubiaceae, consisting of about five types of small trees or shrubs. Three species occur in China, amongst which Luculia pinceana Hooker, found primarily in Yunnan Province at altitudes between 600 and 3000 m has the widest distribution in Nature [1,2,3]. Luculia can be easily recognized by its compact and long-term blooming (usually April to November) inflorescences with white to pink, sweetly fragrant flowers with extremely long corolla tubes. On account of the above-mentioned advantages, Luculia plants have been widely introduced around the world. Studies in the past are often concentrated on its reproductive system, distyly, molecular biology and gametophyte development [1,2,3,4,5,6,7]. In addition, as a traditional medicinal and ornamental plant, research work is underway concerning its cultivation and breeding.
Floral fragrance is one of the most important characteristics of ornamental plants or cut flowers, because it may affect people’s health and mood [8]. Thus, the study of the composition of floral scent and the breeding of new ornamental plant cultivars with sweet-smelling or pleasant fragrance have become new trends of the development of plant breeding nowadays [9]. Although L. pinceana possess the features of long-term blooming, sweet fragrance and has great potential in serving as an indoor plant, research on its floral scent has not been carried out. In this work, the volatile component emissions from different flower development stages of L. pinceana were analyzed by solid phase microextraction coupled with gas chromatography-mass spectrometry in order to build a foundation for future work on Luculia floral fragrance breeding programs. Furthermore, the results could provide a reference for determining whether Luculia species are suitable for indoor cultivation and extraction of essential oil.

Thirty-nine VOCs were identified, representing more than 99% of the total emission of the flowers. These volatiles grouped by their biochemical synthesis pathways [10] were described in Table 1. A total of 18 same volatile compounds were shared at four different stages of flower development of L. pinceana. Within these compounds, the main aroma-active one was paeonol followed by (E,E)-α-farnesene, cyclosativene, and δ-cadinene. These compounds might dominate the flavor for L. pinceana. For instance, paeonol has a specific odour; (E,E)-α-farnesene has a woody and sweet odour; δ-Cadinene gives thyme, medicine and wood odour [11]. As one of these components, γ-muurolene has a smell of herb, wood and spice; methyl salicylate has a flavor with peppermint aroma. The two compounds ranked second in relative content of VOCs at the full-flowering stage and the end-flowering stage separately, so they could also influence the floral aroma.
The idea that L. pinceana has medicinal properties goes back hundreds of years in China [12]. Some of volatile compounds from flowers are pharmacologically active compounds. For example, paeonol has several interesting biological activities, and it has been used as an anti-inflammatory, analgesic, antioxidant, antidiabetic, and acaricidal agent [13,14]; cyclosativene demonstrates strong anti-inflammatory, expectorant, antifungal effect [15]; γ-muurolene and δ-cadinene have antifungal properties. Despite the fact that essential oils are seldom encountered in the Rubiaceae [16], L. pinceana would have a lot of potential for essential oil extraction according to the L. pinceana solid phase microextraction results. Not only that, the essential oil of L. pinceana flowers might have special therapeutic qualities in view of the above active ingredients among the volatile compounds.
Benzenoids were the most abundant amongst floral scent compounds, which content reached at least 51%. The same scenario was noted in the floral essential oil of Randia matudae [17] compared to other species of different genera in the family Rubiaceae. In contrast, the quantity and amount of predominant compounds in the floral scent of Posoqueria latifolia [18], the leaf essential oil of Rustia formosa and the essential oil from aerial parts of Anthospermum emirnense and A. perrieri were sesquiterpenes [16,19]; the floral scent of Cephalanthus occidentalis, Warszewiczia coccinea and Gardenia jasminoides were monoterpenes [20,21]; the floral scent of Coffea Arabica were aliphatics [22]. It has been reported that the floral scent composition probably significantly varied amongst closely related species, and our results partly support this view [10].

Volatile compounds of a complete flower were trapped immediately into a 20 mL capped solid-phase microextraction vial at 8:00–11:00 a.m. Three replicate experiments (five flowers from five inflorescences per replicate) were conducted using different plants randomly and the results were means of three tests (fifteen flowers).
SPME analysis was performed by 100 μm polydimethylsiloxane (PDMS) SPME fiber which was highly sensitive in the analysis of scent components equipped with a manual SPME holder. After the equilibration time, the fiber was exposed to the headspace of the capped vial to absorb volatile compounds for 40 min at room temperature (25 ± 1 °C). The fiber was conditioned in the GC injection port for 1 h at 250 °C before it was used for the first time. In addition, the empty capped vial was used as the blank control. A gas chromatograph-mass spectrometer (TRACE GC Ultra/ITQ900, Thermo Fisher Scientific, Waltham, MA, USA) coupled with a DB-5MS capillary column (5% diphenyl cross-linked 95% dimethylpolysiloxane, 30 m × 0.25 mm i.d., 0.25 μm film thickness. Agilent J & W Scientific, Folsom, CA, USA) were used for the GC-MS analysis. Follow the SPME analysis, the fiber with volatile compounds was exposed in the GC injector port for desorption at 260 °C for 1 min in the splitless mode. Helium was used as a carrier gas at a constant flow-rate of 1 mL/min. The oven temperature was programmed at 40 °C for 2 min, increasing 6 °C/min to 130 °C and then increasing 15 °C/min to 280 °C for 5 min. The split and splitless injection port were held at 260 °C and 200 °C in split mode at a split ratio of 1:10. The temperature of the transfer line and the ion source were 200 °C and 250 °C. The ionization potential of mass selective detector was 70 eV and the scan range was 50–650 amu.

Identification of the volatile compounds was based on comparison of their mass spectra with NIST08 database through Software TF Xcalibur 2.1.0 (Thermo Fisher Scientific). Volatile compounds were identified on the basis of their linear retention index (LRI) and by comparing their mass spectra with a computerized MS-database using NIST 2008 library and published data (Pherobase, http://www.pherobase.com/; NIST, http://webbook.nist.gov/chemistry/; The LRI and Odour Database, http://www.odour.org.uk).
LRI were calculated by the use of a series of n-alkane standards (C6–C19) (Accu Standard, New Haven, CT, USA). It is defined as Equation (1):
Peak areas were normalized as percentage and used to determine the relative amounts of the volatiles. The normalization method from the Equation (2):
The data were expressed as mean ± standard deviation (SD) of triplicate measurements. One-way analysis of variance (ANOVA) with Tukey’s test in SPSS software was used to assess differences in aroma compounds among four different stages of L. pinceana flower development. Volatile compounds identified at a full life-flower scale were analyzed by using principal component analysis (PCA) and Bray-Curtis similarity (BCS). PCA and BCS were carried out using PC-ORD for Windows (Version 5.0; MjM Software, Gleneden Beach, OR, USA).

The present investigation showed that 39 VOCs were identified in all flower-life stages of L. pinceana, amongst them, 26 at bud stage, 26 at initial-flowering stage, 32 at full-flowering stage, and 32 at end-flowering stage. Benzenoids were the most abundant amongst floral scent compounds. The amount of floral scent emission offered tendency of ascending first and descending in succession, reaching peak level at initial-flowering stage. The highest diversity of floral volatile was detected at the third and later periods of flower developmental stage. The odour evidently differed in composition and its relative content in the four flower developmental stages. The second flower developmental stage was recommended as the best harvesting time if a high level of VOCs and essential oil are of interest. L. pinceana could serve as beneficial houseplant in the future, besides as fragrant ornamental according to the VOCs emitted from the flowers. Furthermore, L. pinceana has a promising prospects for development as an essential oil source owing to the many medicinal properties of the main compounds of the floral scent. 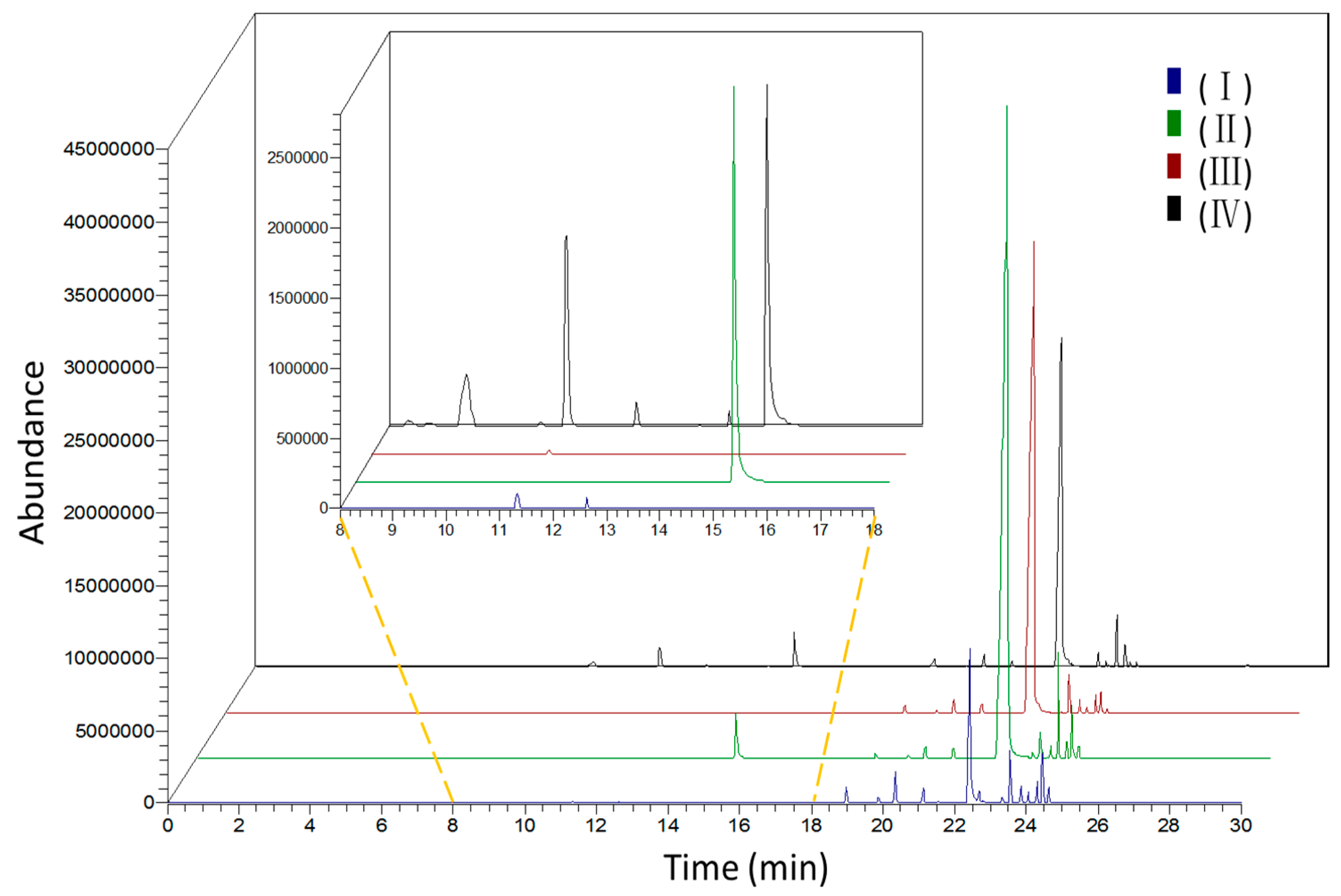