Cryptolepine, a Plant Alkaloid, Inhibits the Growth of Non-Melanoma Skin Cancer Cells through Inhibition of Topoisomerase and Induction of DNA Damage
Next Article in Special Issue

Hydrogen Sulfide in the Adipose Tissue—Physiology, Pathology and a Target for Pharmacotherapy
Previous Article in Journal

It was in the 1950s that the term polysulfide or persulfide was introduced in biological studies. The unfamiliar term “sulfane sulfur” sometimes appeared in papers published in the 1970s, and was defined in the review article by Westley in 1983. In the article, sulfane sulfur is described as sulfur atoms that are covalently bound only with sulfur atoms, and as this explanation was somewhat difficult to comprehend, it was not generally accepted. Thus, in the early 1990s, we redefined these sulfur species as “bound sulfur”, which easily converts to hydrogen sulfide on reduction with a thiol reducing agent. In other words, bound sulfur refers to a sulfur atom that exists in a zero to divalent form (0 to −2). The first part of this review focuses on the fluorescent derivatization HPLC method—which we developed for measurement of bound sulfur—and explains the distribution of bound sulfur and the hydrogen sulfide-producing ability of various tissues, as clarified by this method. Next, we discuss diverse physiological functions and involvement of polysulfide, a typical type of bound sulfur, in the redox regulation system. Additionally, we also address its possible physiological role in the central nervous system, based on its action of scavenging reactive carbonyl compounds. View Full-Text
Keywords: bound sulfur; hydrogen sulfide; oxidative stress; persulfide; polysulfides bound sulfur; hydrogen sulfide; oxidative stress; persulfide; polysulfides
►▼ Show Figures 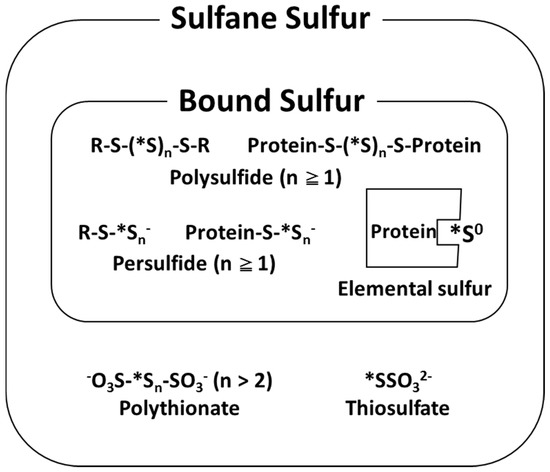