Identification and Characterisation of the Antimicrobial Peptide, Phylloseptin-PT, from the Skin Secretion of Phyllomedusa tarsius, and Comparison of Activity with Designed, Cationicity-Enhanced Analogues and Diastereomers
Next Article in Special Issue

We demonstrate in situ recorded motion of nano-objects adsorbed on a photosensitive polymer film. The motion is induced by a mass transport of the underlying photoresponsive polymer material occurring during irradiation with interference pattern. The polymer film contains azobenzene molecules that undergo reversible photoisomerization reaction from trans- to cis-conformation. Through a multi-scale chain of physico-chemical processes, this finally results in the macro-deformations of the film due to the changing elastic properties of polymer. The topographical deformation of the polymer surface is sensitive to a local distribution of the electrical field vector that allows for the generation of dynamic changes in the surface topography during irradiation with different light interference patterns. Polymer film deformation together with the motion of the adsorbed nano-particles are recorded using a homemade set-up combining an optical part for the generation of interference patterns and an atomic force microscope for acquiring the surface deformation. The particles undergo either translational or rotational motion. The direction of particle motion is towards the topography minima and opposite to the mass transport within the polymer film. The ability to relocate particles by photo-induced dynamic topography fluctuation offers a way for a non-contact simultaneous manipulation of a large number of adsorbed particles just in air at ambient conditions. View Full-Text
Keywords: motion of adsorbed nano-particles; azobenzene containing polymer films; fluctuating surfaces motion of adsorbed nano-particles; azobenzene containing polymer films; fluctuating surfaces
►▼ Show Figures 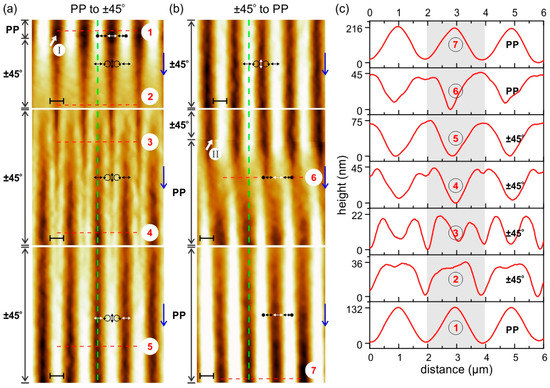