Inflammasomes are a family of proteins in charge of the initiation of inflammatory process during innate immune response. They are now considered major actors in many chronic inflammatory diseases. However, no major drug focusing on this target is currently on the market. Among the various approaches aiming to control this major metabolic pathway, compounds aiming to modify the intracellular antioxidant profile appear to be promising. This can be obtained by “light” antioxidants able to induce natural antioxidant response of the cell itself. This review will give an overview of the current available information on this promising pharmacology approach.
Keywords: inflammasomes; natural antioxidants; inflammation inflammasomes; natural antioxidants; inflammation

Innate immunity is under the control of Pattern Recognition Receptors (PRRs) able to recognize Pathogen-Associated Molecular Patterns (PAMPs) originating from external pathogens, and/or Danger-Associated Molecular Patterns (DAMPs) originating from endogenous stress. The initial answer is the induction of inflammation, which is a normal biological process leading to the elimination of the initial aggressor. Inflammation can be eventually followed by stimulation of adaptive immunity. The first step of inflammation is the production of the pro-inflammatory cytokines Interleukin-1β (IL-1β) and interleukin-18 (IL-18) and the immunoregulatory cytokines type 1 interferon-α and β (INFα and INFγ) when PAMPs are externally recognized. Altogether, these cytokines have demonstrated a major role in innate and adaptive immunity. The pro-inflammatory cytokines IL-1β and IL-18 are produced under the control of inflammasomes, a family of proteins described for the first time in 2002 [1]. Inflammasomes were initially reported for their role in rather marginal or quite benign pathologies such as periodic fevers and gout but are now considered key actors in many chronic inflammatory diseases. Their roles in metabolic, neurologic and autoimmune diseases as well as in the initiation, control and dissemination of cancer are the subject of recent elegant reviews [2,3,4,5,6,7,8,9,10,11]. Reactive oxygen species (ROS) are a major regulator of this metabolic pathway [12] so compounds able to modify intracellular redox equilibrium may have a strong pharmacological activity on innate and/or adaptive immunity.
With the exception of mifamurtide for the co-treatment of osteosarcoma [13] in humans, no marketed compound described to interact with the inflammasomes pathway is available on the market. Mifamurtide is available in Europe only. This drug is a lipopeptide analogue of muramyl dipeptide developed as an activator of macrophages by interaction with intracellular PRRs [14].
At the clinical level, inflammatory symptoms such as fevers, tremors and pain are efficaciously controlled by anti-inflammatory agents acting on the secondary steps of inflammatory response. However, these drugs may be expensive (i.e., recombinant drugs), and are always associated with high morbidity (i.e., steroids [15] or non-steroids [16]), especially after chronic administration. Furthermore, at the patient’s level, a strong need for natural and less expensive preventive or curative treatments is noticed so new therapeutic options are urgently required. This review will summarize the current scientific information on inflammasome pathway and describe the modulation of this target with natural anti-oxidants able to act directly or indirectly on the activation of the inflammasomes.

Although a precise landscape of PRRs families remains to be definitively established and stabilized, five families of PRRs are currently described (Table 1). The PRRs able to respond to PAMPs are Toll-like Receptors (TLRs) and C-type Lectin Receptors (CLRs). They are expressed at the cell membrane level and in the endosome membrane. They are able to stimulate the Nuclear Factor-kappa B (NF-κB) pathway with global cell activation, and, in particular, synthesis of components of the inflammasomes and production of the type 1 interferons. The PRRs able to respond to DAMPs and PAMPs are the inflammasome Nucleotide-binding domain and Leucin-rich repeat Receptors (NLRs), Retinoic acid-inducible gene Like Helicase Receptors (RLHs) and Absent In Melanoma-like receptors (AIMs). NLRP3, who belongs to the NLR family, is the most studied inflammasome. NLRs, RLHs and AIMs are expressed intracellularly. They are responsible for the production of pro-inflammatory cytokines IL-1β and IL-18 and are deeply involved in the induction of a particular form of cell death named pyroptosis. This non-apoptotic cell death depends on the activation of caspase-1 and/or 5 and/or 11 with major modifications of cell membrane integrity leading to rapid cell death and further production of pro-inflammatory cytokines. However, the precise biochemical mechanisms and final role of this particular cell death remain to be defined [17]. The inflammasomes are activated by many ligands including peptidoglycans ribonucleic acids, and ROS are reported to be a major regulator of this metabolic pathway [18].
The inflammasome proteins are produced in cells in an inactivate form who must be activated by superstructure assembly and maturation processes leading to a rapid biological answer. This process can be also observed during coagulation, knowing that the set of genes for both pathways were reported to derive from the same ancestral cluster [19]. After stimulation by PAMPs and/or DAMPs and with complementary signals, the inactive proteins of the inflammasomes will be aggregated. This induces the activation of the ATPase function leading to the final activation of protease caspase-1. Then, the maturation of inactive pro-IL1 β and pro IL-18 into their active final form occurs. Pyroptosis can be also induced according to the nature and intensity of initial stimuli. A simplified model of inflammasome pathways is presented in Figure 1.
Production of ROS by mitochondria in combination with thioredoxin (TXN), Thioredoxin Interacting Protein (TXNIP) and heme-oxygenase 1 (HO-1) are key regulators of intracellular redox with major importance during initiation and maintenance of inflammatory pathologies and for mitochondria homeostasis [20]. The production of cathepsins after lesions of the phagosome and modification of the NADPH oxidase equilibrium are also directly or indirectly involved in the functions of the inflammasomes. The influence of another actor such as nuclear factor erythroid 2–related factor 2 (Nrf2) able to induce natural anti-oxidant defense is also evidenced [21]. If the initial equilibrium cannot be re-obtained rapidly after this initial burst, a situation of chronic inflammation occurs with development of fibrosis [7] necrosis [22] and pain [23].

The overall landscape shows a great diversity of compounds (Figure 2) and corresponding targets (Figure 3). This may indicate that the anti-inflammatory activity is rather non-specific and that the inflammasomes are effectively the junction of many metabolic pathways.
The pharmacology of inflammasomes is a very interesting target for the pharmaceutical industry [88] and an original approach for the development of new compounds and the rejuvenation of marketed drugs or extracts used in traditional medicine. Numerous compounds are now described for their powerful activity as inhibitors and/or regulators of the pathway of the inflammasomes with many therapeutic possibilities. However, in the majority of cases, the demonstration of a direct link between the considered drug and the inflammasomes themselves is not available. When the anti-oxidant activity is studied in vitro in cellular or acellular conditions, a classification of compounds or mixtures according to their activity can be done. However, as soon as these compounds are administered orally or parenterally to a patient, there is no simple correlation between the initial antioxidant profiling and the final biological activity. The example of Oxygen Radical Absorbance Capacity (ORAC) illustrates perfectly the situation. ORAC value is well-known and used as a kind of calibrator for the anti-oxidant activities of compounds. Companies and final users are aware of it. However, the database on antioxidant profiling of foods with ORAC of the U.S. Department of Agriculture [89] is no longer available online due to the absence of a clear correlation between in vitro and in vivo activities. We can anticipate that the identification of a direct link between the antioxidant capacity and the final biological / therapeutic activity remains an elusive goal for a while.
Two approaches may be considered. The first one may use an in silico approach to identify natural structures able to interact physically with inflammasomes before, during, and after signal 2 in order to identify specific linkers. This kind of approach was done for ferulic acid and will be developed as soon as all proteins of the inflammasome families will be described in detail. The second one may use a kind of “natural approach” by creating mixtures of natural antioxidants coming from different species, origins, parts etc., with complementary mechanisms of action as described for nobiletine and sulforaphane aiming to help the cell to solve the aggression and not to replace the cell machinery itself. In that case, the use of a more global approach such as an hemolytic test [90], in association with the multiplex analysis of a selected panel of cytokines to measure the influence of a drug on general antioxidant defense, may be more appropriate.

I thank Norbert Latruffe for his encouragement to finish this review. 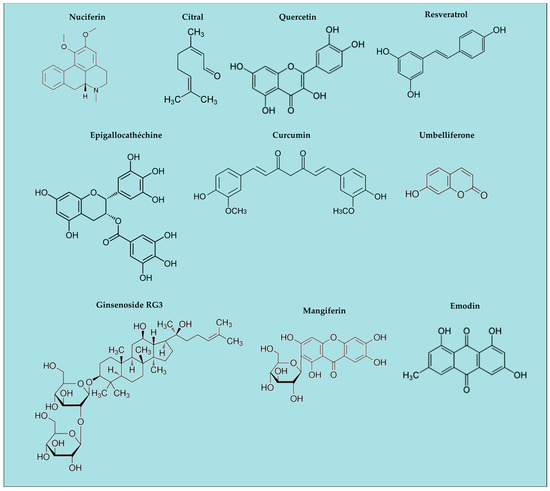 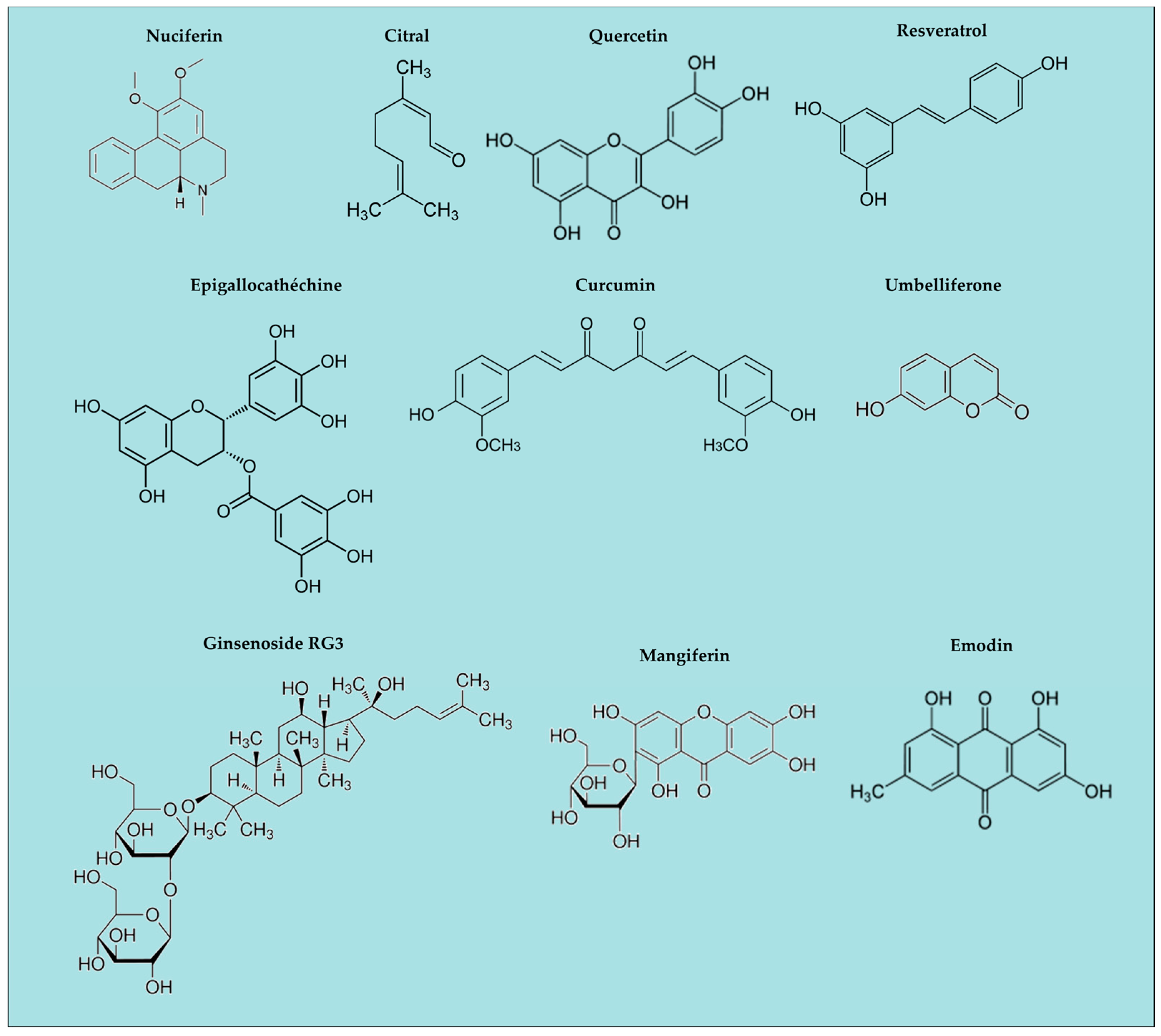 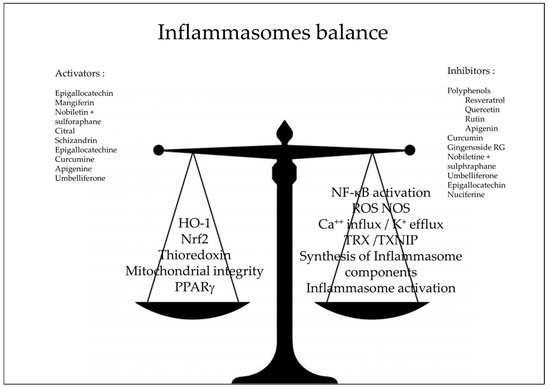