Phytochemicals provide environmentally friendly and relatively inexpensive natural products, which could potentially benefit public health by controlling human norovirus (HuNoV) infection. In this study, 18 different phytochemicals were evaluated for antiviral effects against norovirus using murine norovirus (MNV) as a model for norovirus biology. Among these phytochemicals, curcumin (CCM) was the most potent anti-noroviral phytochemical, followed by resveratrol (RVT). In a cell culture infection model, exposure to CCM or RVT for 3 days reduced infectivity of norovirus by 91% and 80%, respectively. To confirm the antiviral capability of CCM, we further evaluated its antiviral efficacy at various doses (0.25, 0.5, 0.75, 1, and 2 mg/mL) and durations (short-term: 10, 30, 60, and 120 min; long-term: 1, 3, 7, and 14 days). The anti-noroviral effect of CCM was verified to occur in a dose-dependent manner. Additionally, we evaluated the inhibitory effect of each phytochemical on the replication of HuNoV using a HuNoV replicon-bearing cell line (HG23). Neither CCM nor RVT had a strong inhibitory effect on HuNoV replication, which suggests that their antiviral mechanism may involve viral entry or other life cycle stages rather than the replication of viral RNA. Our results demonstrated that CCM may be a promising candidate for development as an anti-noroviral agent to prevent outbreaks of foodborne illness.
Keywords: curcumin; norovirus; phytochemical curcumin; norovirus; phytochemical

Human norovirus (HuNoV) is the leading cause of viral gastroenteritis outbreaks worldwide [1,2,3]. Clinical symptoms of HuNoV infection include vomiting, nausea, and diarrhea within 24–48 h of infection [4]. HuNoV has low infectious doses of ~10 viral particles and is highly infectious to susceptible individuals. In particular, young children, the elderly, and people with weak immune systems experience severe symptoms [5,6]. HuNoV is transmitted mainly through the fecal-oral route and spreads easily from person to person, especially in crowded settings such as hospitals, restaurants, nursing homes, cruise ships, hotels, and schools [7,8,9].
Due to the current lack of a HuNoV vaccine, preventive measures are the most effective way to reduce outbreaks of HuNoV, which is known to be resistant to environmental stresses [10,11]. Therefore, current prevention methods for HuNoV include promoting personal hygiene for food handlers to avoid noroviral contamination and inactivation of infectious viral particles [12,13]. Inactivation of HuNoV relies on physical methods, such as heating or radiation, and chemical methods such as sodium hypochlorite or titanium dioxide [10,14,15,16]. However, the currently available methods have disadvantages for direct application to food. These include (1) increased cost of equipment and management; (2) potential acute and chronic toxic effects from chemical exposure; and (3) spoiling of food flavor or texture.
Therefore, environmentally friendly substances that might substitute for the established physical and chemical methods would be beneficial and directly applicable to food products such as oysters. Phytochemicals can be obtained from various natural plant extracts and most of them are “generally recognized as safe” (GRAS) [17]. This has led many researchers to study natural substances with antimicrobial properties [18,19]. Although previous studies have demonstrated that various phytochemicals possess antimicrobial effects, little research has been conducted to evaluate the efficacy of phytochemicals in reducing the infectiousness of norovirus [20].
Cultivation methods for HuNoV using B cells [21] or isolated enterocytes [22] were reported recently. Although those findings are very meaningful and can be a milestone to decipher the mechanisms of norovirus infection at a molecular level, it is a bit early to apply the methods to screening various antiviral compounds. The replication of HuNoV in a B-cell culture system did not appear to be robust, as observed in murine norovirus (MNV) [23], and the methods need to be validated with different types of HuNoV in other laboratories. Therefore, many previous studies have used viral models using MNV, feline calicivirus (FCV), and other in vitro models of HuNoV replication (e.g., HG23 cells) to evaluate the anti-noroviral activities of compounds [24,25]. In this study, we used MNV and HG23 cells to investigate the ability of several phytochemicals to inactivate norovirus.
We screened the anti-noroviral effects of 18 different phytochemicals using a viral model to study norovirus biology. Dose- and time-dependent trends were evaluated for the phytochemical with the greatest efficacy. Subsequently, the results of inactivation after long-term phytochemical incubation were fitted to three different mathematical models. Inhibitory effects on norovirus replication were measured using a HuNoV replicon-bearing cell (HG23) model.

2.2. Effects of Phytochemicals on Neutralization of MNV

2.3. Dose-Response Relationship between CCM Exposure and Inactivation of MNV

2.4. Short- and Long-Term Effects of Curcumin on Viral Neutralization

To assess the anti-noroviral behavior of CCM over a long period (days) (Figure 3B), three different models were evaluated: (i) the linear model; (ii) the Weibull model; and (iii) the log-logistic model (Figure 4). To assess the fit of the models, regression coefficient (R2), root-mean-square error (RMSE), and Akaike information criterion (AIC) were compared, and are summarized in Table 2. Higher R2 and lower RMSE values indicate a better-fitting model [27]. The log-logistic model showed the best fit to CCM data, with the highest R2 (0.99) and lowest RMSE (0.02) values. In contrast, the linear model appeared to be inappropriate for the observed data.

2.6. Effects of Phytochemicals on Replication of HuNoV in Replicon-Bearing Cells

4.3. Cultivation of MNV and Preparation of Viral Stock

MNV was inoculated onto confluent RAW 264.7 cells and incubated until the virus caused visible cytopathic effects [14,54]. Infected cells were subjected to three freeze–thaw cycles. Propagated MNV was purified with chloroform (AMRESCO, Solon, OH, USA) and centrifuged at 5000× g for 20 min at 4 °C. Subsequently, the supernatant was collected and centrifuged through a 0.2-micron filter (Amicon Ultra-15; Millipore, Billerica, MA, USA). After concentration, the supernatant was aliquoted and stored at −80 °C.

4.5. Quantification of MNV by Plaque Assay

The titer of MNV (PFU/mL) was quantified by a plaque assay [56]. RAW 264.7 cells were seeded onto 6-well plates at 3 × 106 cells/well and incubated at 37 °C in a 5% CO2 incubator overnight. Ten-fold serial dilutions of MNV were prepared in DMEM. RAW 264.7 cells were inoculated with 500 µL of MNV solution. The plates were incubated for 1 h and gently rocked every 15 min. After incubation, the inocula were aspirated and the cells were subsequently overlaid with 3 mL of a 1:1 (v/v) mixture of 1.5% SeaPlaque agarose (Lonza, Rockland, ME, USA) and 2× minimum essential medium (MEM) supplemented with 10 mM nonessential amino acids (Gibco), 10 mM HEPES (Gibco), 10 mM sodium bicarbonate (Gibco), 50 µg/µL gentamycin (Gibco), and 10% fetal bovine serum (Gibco) at 37 °C. Plates were incubated for another 72 h, then plaques were counted and recorded in PFU/mL.

MNV stock (50 µL) was treated with 2.5 µL of the selected phytochemical, followed by addition of 447.5 µL of DMEM (a final concentration of 1.0 × 106 PFU/mL and 1 mg/mL of phytochemical) at 4 °C for 3 days. This neutralization study was based on a modified procedure described in a previous study [17]. MNV is more stable at 4 °C than at room temperature (25 °C). Thus, we exposed MNV to phytochemicals at 4 °C, following the previously published protocol [10]. The efficacy of neutralization against MNV was quantitatively evaluated for each of the 18 phytochemicals tested over several incubation periods. For short-term exposure tests, we applied the phytochemicals to MNV for 10, 30, 60, or 120 min. Additionally, we performed long-term exposure assays by applying the phytochemicals tested to MNV for 1, 3, 7, and 14 days [42]. Plaque assays were performed as described above. Each experiment was tested in triplicate.

The effect of phytochemicals on virus replication was quantitatively evaluated using HuNoV (Norwalk) replicon-bearing HG23 cells and a real-time RT-PCR assay [57]. HG23 cells (2 × 105 cells/well) were seeded into six-well plates in complete DMEM with G418, then cultivated at 37 °C in a 5% CO2 incubator for 24 h. Subsequently, phytochemicals were added to the HG23 cells, which were incubated for a further 72 h. The supernatant was removed, and the remaining cells were collected for RNA-load quantification by real-time RT-PCR. To normalize intracellular viral RNA load, β-actin mRNA was used, and the viral replicon/β-actin ratio was calculated using the Pfaffl method [58], as follows: ENorwalkΔCT,Norwalk(control−sample)/Eβ-actinΔCT,β-actin(control−sample), where E refers to the real-time RT-PCR amplification efficiency, E = 10(−1/slope). ΔCT is the difference in CT (threshold cycle) values.

To predict the anti-noroviral effect of CCM and understand the inactivation kinetics based on a long exposure time (days), three models (linear, Weibull, and log-logistic) were compared to determine which best fitted the data. Neutralization curves were fitted to the observed data in SigmaPlot (ver. 2.0; Systat Software, San Jose, CA, USA). To evaluate the models, the regression coefficient (R2), root-mean-square error (RMSE), and Akaike information criterion (AIC) of each model were compared. The linear model is a general model for explaining the inactivation of microorganisms under constant conditions [27], and is calculated as follows: where Nt is the concentration of MNV (PFU/mL) after exposure, N0 is the initial concentration of MNV (PFU/mL), t signifies exposure time, and D denotes the D-value, or the time in days required to inactivate 90% of the MNV under the indicated conditions. The Weibull model is a nonlinear model with a sigmoidal shape [61], calculated as follows: where t indicates the exposure time, and b is a scaling parameter. The parameter n alters the shape of the curve: if n > 1, it is downward concave (shoulder) and if n < 1, it is upward concave (tailing). The log-logistic model was first proposed by Cole et al. to describe nonlinear inactivation of microorganisms [62], and has been modified to decrease the number of parameters [63]. The log-logistic model is defined as follows: where A is the difference between the upper and lower asymptotes (log PFU/mL), σ is the maximum inactivation rate (log (PFU/mL)/log day), and τ denotes time to the maximum inactivation rate (log day). Since log (t0) at t = 0 is not defined, a small value of t0 (t = 10−6 day) was used instead of 0.

The data were transformed to a percentage scale to quantify viral neutralization, expressed as inhibition (%). Statistical significance was determined based on one-way or two-way analysis of variance (ANOVA) with Bonferroni post-tests, using Prism 5 software (Graph-Pad Software, San Diego, CA, USA).

Table A1. List of phytochemicals tested for anti-noroviral activity. 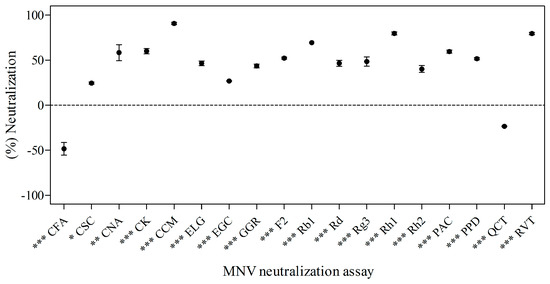 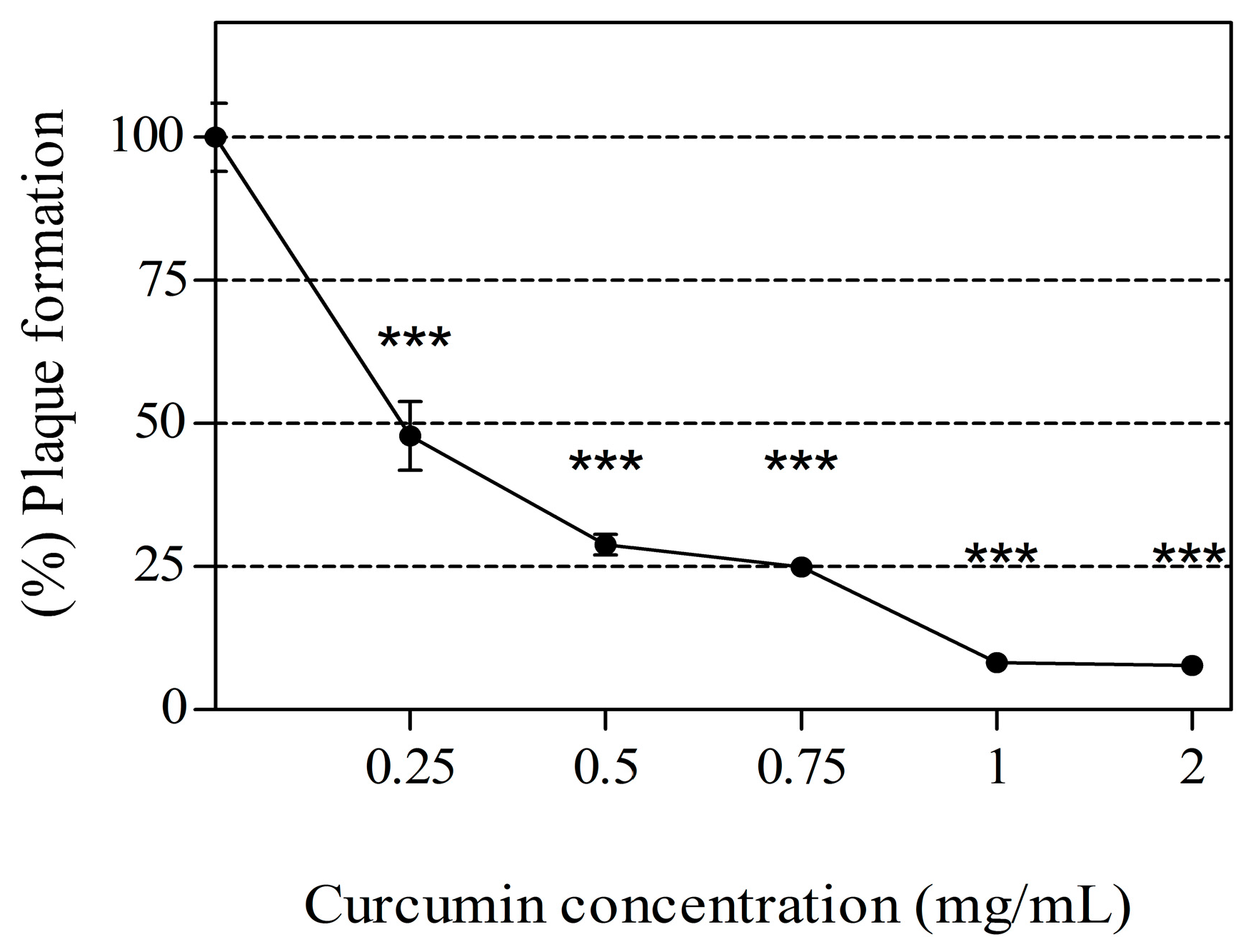 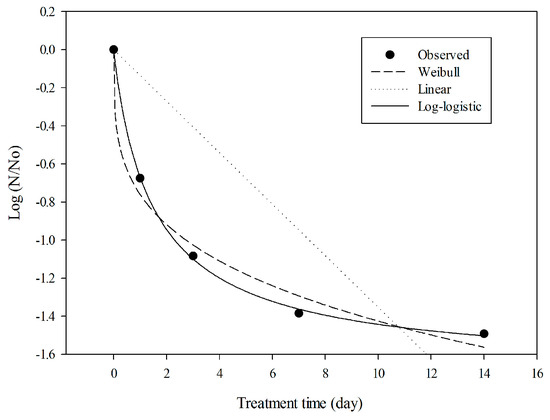 Table 1. Evaluation of cytotoxicity of phytochemicals in two different cell lines.
a RAW 264.7 cells were treated with 100 µg/mL of phytochemical and incubated for 1 h and b HG23 cells were treated with 20 µg/mL and incubated for 72 h at 37 °C with 5% CO2. † Treatment concentration is 2 µg/mL due to cytotoxicity at 20 µg/mL. DMSO was used as a vehicle control. All data (mean ± SEM) were derived from triplicate determination.

Table 2. Comparison of linear, Weibull, and log-logistic models in terms of long-term anti-noroviral data for curcumin.
R2 is the correlation coefficient, RMSE is the root mean square error, AIC is the Akaike information criterion, and D-value is the time in days required to inactivate 90% of the MNV.