Flavonoid Interaction with a Chitinase from Grape Berry Skin: Protein Identification and Modulation of the Enzymatic Activity
Previous Article in Special Issue

Green tea has been shown to have beneficial effects against cancer, obesity, atherosclerosis, diabetes, bacterial and viral infections, and dental caries. The catechin (−)-epigallocatechin-3-gallate (EGCG) has shown the highest biological activity among green tea catechins (GTCs) in most of the studies. While several epidemiological studies have shown the beneficial effects of tea and GTCs on obesity, some studies have failed to do this. In addition, a large number of interventional clinical studies have shown these favorable effects, and cellular and animal experiments have supported those findings, and revealed the underlying anti-obesity mechanisms. One of the mechanisms is enhanced cellular production of reactive oxygen species, which is mediated through the pro-oxidant action of EGCG, leading to the activation of adenosine monophosphate-activated protein kinase, which suppresses gene and protein expression of enzymes and transcription factors involved in adipogenesis and lipogenesis, and stimulates those involved in lipolysis. Recently, scientific evidence supporting the beneficial anti-obesity effects of green tea and GTCs has been increasing. However, future investigations are still required to clarify the reasons for the inconsistent results reported in the human studies; to achieve this, careful adjustment of confounding factors will be required. View Full-Text
Keywords: green tea; catechin; obesity; adipogenesis; lipogenesis; lipolysis; AMPK green tea; catechin; obesity; adipogenesis; lipogenesis; lipolysis; AMPK
►▼ Show Figures 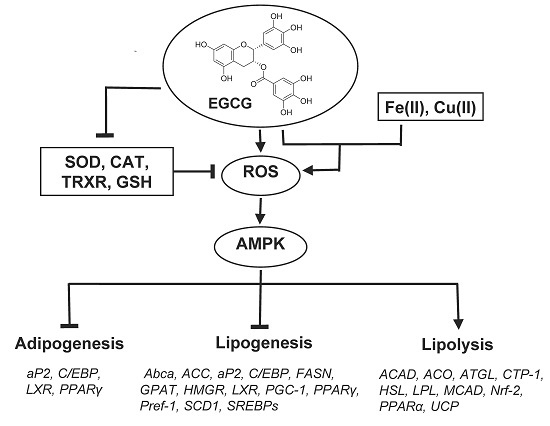