Andrographis paniculata (A. paniculata, Chuanxinlian), a medicinal herb with an extremely bitter taste that is native to China and other parts of Southeast Asia, possesses immense therapeutic value; however, its therapeutic properties have rarely been applied in the field of skin care. In this study, we investigated the effect of an A. paniculata extract (APE) on human epidermal stem cells (EpSCs), and confirmed its anti-aging effect through in vitro, ex vivo, and in vivo study. An MTT assay was used to determine cell proliferation. A flow cytometric analysis, with propidium iodide, was used to evaluate the cell cycle. The expression of integrin β1 (CD29), the stem cell marker, was detected with antibodies, using flow cytometry in vitro, and immunohistochemical assays in ex vivo. Type 1 collagen and VEGF (vascular endothelial growth factor) were measured using an enzyme-linked immunosorbent assay (ELISA). During the clinical study, skin hydration, elasticity, wrinkling, sagging, and dermal density were evaluated before treatment and at four and eight weeks after the treatment with the test product (containing the APE) on the face. The proliferation of the EpSCs, treated with the APE, increased significantly. In the cell cycle analysis, the APE increased the G2/M and S stages in a dose-dependent manner. The expression of integrin β1, which is related to epidermal progenitor cell expansion, was up-regulated in the APE-treated EpSCs and skin explants. In addition, the production of VEGF in the EpSCs increased significantly in response to the APE treatment. Consistent with these results, the VEGF and APE-treated EpSCs conditioned medium enhanced the Type 1 collagen production in normal human fibroblasts (NHFs). In the clinical study, the APE improved skin hydration, dermal density, wrinkling, and sagging significantly. Our findings revealed that the APE promotes a proliferation of EpSCs, through the up-regulation of the integrin β1 and VEGF expression. The VEGF might affect the collagen synthesis of NHF as a paracrine factor. Clinical studies further suggested that treatment with formulations containing APE confers anti-aging benefits. Based on these results, we suggest that APE may be introduced as a possible anti-aging agent. View Full-Text
Keywords: Andrographis paniculata; antiaging; epidermal stemness; integrin β1 Andrographis paniculata; antiaging; epidermal stemness; integrin β1
►▼ Show Figures 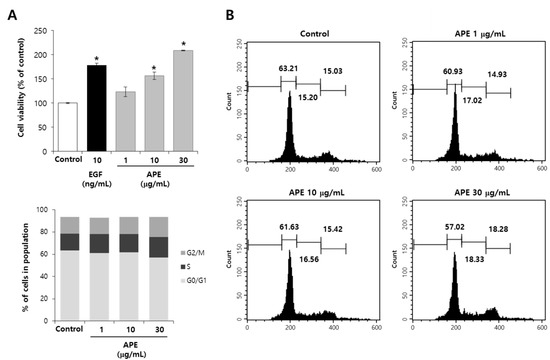