This study aimed to explore the effect of attenuated UV radiation around grape clusters on the volatile profile of Cabernet Sauvignon grapes (Vitis vinifera L. cv.) under field conditions. Grape bunches were wrapped with two types of polyester films that cut off 89% (film A) and 99% (film B) invisible sunlight of less than 380 nm wavelength, respectively. Solar UV radiation reaching the grape berry surface was largely attenuated, and an increase in the concentrations of amino acid-derived benzenoid volatiles and fatty acid-derived esters was observed in the ripening grapes. Meanwhile, the attenuated UV radiation significantly reduced the concentrations of fatty acid-derived aldehydes and alcohols and isoprenoid-derived norisoprenoids. No significant impact was observed for terpenes. In most case, these positive or negative effects were stage-dependent. Reducing UV radiation from the onset of veraison to grape harvest, compared to the other stages, caused a larger alteration in the grape volatile profile. Partial Least Square Discriminant Analysis (PLS-DA) revealed that (E)-2-hexenal, 4-methyl benzaldehyde, 2-butoxyethyl acetate, (E)-2-heptenal, styrene, α-phenylethanol, and (Z)-3-hexen-1-ol acetate were affected most significantly by the attenuated UV radiation. View Full-Text
Keywords: UV attenuation; volatile compounds; grape berry UV attenuation; volatile compounds; grape berry
►▼ Show Figures 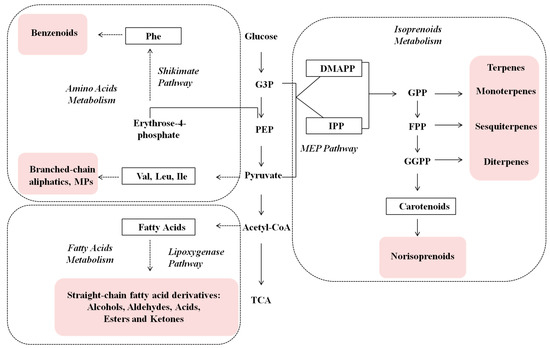