We describe the use of two series of aryl-extended calix[4]pyrrole receptors bearing two and four electronically tunable phenyl groups, respectively, in their meso-positions as model systems for the quantification of CH-π interactions in solution. The “four-wall” and the “two-wall” receptors formed thermodynamically stable 1:1 complexes in acetonitrile solution with both trimethylamine N-oxide and trimethylphosphine P-oxide as guests. The complexes were mainly stabilized by the formation of four convergent hydrogen bonds between the oxygen atom of the guests and the pyrrole NHs of the host. In general, the N-oxide produced thermodynamically more stable hydrogen bonding interactions than the P-oxide. Upon guest binding, the receptors adopted the cone conformation and the methyl groups of the included guests engaged in CH-π interactions with the aromatic walls. We show that the modification of the electronic properties of the aromatic surfaces, in any of the receptor series, did not have a significant impact in the measured binding affinities for a given guest. However, the larger binding affinities determined for the “four-wall” receptors in comparison to the “two-wall” counterparts supported the importance of CH-π interactions on guest complexation. The strength of the CH-π interactions present in the inclusion complexes was quantified employing the octamethyl calix[4]pyrrole as reference. We determined an average magnitude of ~1 kcal·mol−1 for each CH-π interaction. The CH-π interactions featured a reduced electrostatic nature and thus dispersion forces were assigned as main contributors of their strength. View Full-Text
Keywords: CH-π interactions; calix[4]pyrrole; trimethylamine oxide; trimethylphosphine oxide; electrostatic forces; dispersion forces CH-π interactions; calix[4]pyrrole; trimethylamine oxide; trimethylphosphine oxide; electrostatic forces; dispersion forces
►▼ Show Figures 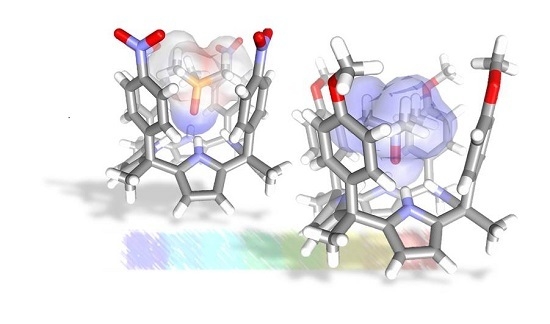