Dihydro-5,6-dehydrokavain (DDK) from Alpinia zerumbet: Its Isolation, Synthesis, and Characterization
Next Article in Special Issue

Xanthorrhizol is a potent antimicrobial compound isolated from the rhizome of Curcuma xanthorrhiza. However, the mechanism of xanthorrhizol action is unknown. To screen for probable target(s), we introduced the ASKA pooled-plasmid library into Escherichia coli W3110 imp4213 and enriched the library for resistant clones with increasing concentrations of xanthorrhizol. After three rounds of enrichment, we found nine genes that increased xanthorrhizol resistance. The resistant clones were able to grow in LB medium containing 256 µg/mL xanthorrhizol, representing a 16-fold increase in the minimum inhibitory concentration. Subsequent DNA sequence analysis revealed that overexpression of tadA, galU, fucU, ydeA, ydaC, soxS, nrdH, yiiD, and mltF genes conferred increased resistance towards xanthorrhizol. Among these nine genes, tadA is the only essential gene. tadA encodes a tRNA-specific adenosine deaminase. Overexpression of E. coli W3110 imp4213 (pCA24N-tadA) conferred resistance to xanthorrhizol up to 128 µg/mL. Moreover, overexpression of two tadA mutant enzymes (A143V and F149G) led to a twofold increase in the MIC. These results suggest that the targets of xanthorrhizol may include tadA, which has never before been explored as an antibiotic target. View Full-Text
Keywords: food-grade antimicrobial compounds; xanthorrhizol; tRNA-specific adenosine deaminase food-grade antimicrobial compounds; xanthorrhizol; tRNA-specific adenosine deaminase
►▼ Show Figures 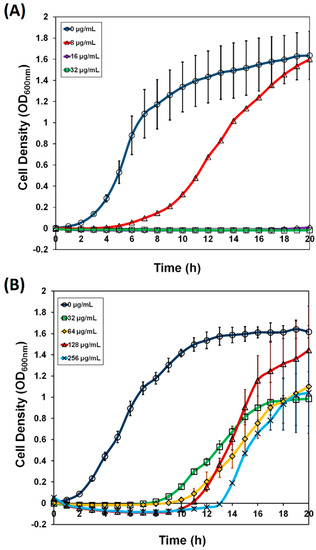