Nitric Oxide Donors and Selective Carbonic Anhydrase Inhibitors: A Dual Pharmacological Approach for the Treatment of Glaucoma, Cancer and Osteoporosis

Nitric oxide (NO), a well-known signaling molecule plays an important role in abiotic and biotic stress-induced production of plant secondary metabolites. In this study, roles of NO in water stress-induced tanshinone production in Salvia miltiorrhiza hairy roots were investigated. The results showed that accumulations of four tanshinone compounds in S. miltiorrhiza hairy roots were significantly stimulated by sodium nitroprusside (SNP, a NO donor) at 100 μM. Effects of SNP were just partially arrested by the mevalonate (MVA) pathway inhibitor (mevinolin), but were completely inhibited by the 2-C-methyl-d-erythritol-4-phosphate pathway (MEP) inhibitor (fosmidomycin). The increase of tanshinone accumulation and the up-regulation of HMGR and DXR expression by PEG and ABA treatments were partially inhibited by an inhibitor of NO biosynthesis (Nω-nitro-L-arginine methyl ester (L-NAME)) and a NO scavenger (2-(4-Carboxyphenyl)- 4,4,5,5-tetramethylimidazoline-1-oxyl-3-oxide (c-PTIO)). Simultaneously, NO generation in the hairy roots was triggered by PEG and ABA, and the effects were also arrested by c-PTIO and L-NAME. These results indicated that NO signaling probably plays a central role in water stress-induced tanshinone production in S. miltiorrhiza hairy roots. SNP mainly stimulated the MEP pathway to increase tanshinone accumulation.
Keywords: nitric oxide; tanshinone; Salvia miltiorrhiza; polyethylene glycol; abscisic acid nitric oxide; tanshinone; Salvia miltiorrhiza; polyethylene glycol; abscisic acid

Secondary metabolites, important sources for pharmaceuticals, food additives, flavors, and other industrial materials, are an important focus of crop breeding and metabolic engineering. Although secondary metabolites are generally nonessential for the maintenance of fundamental life processes, they play important roles in the interaction between plants and their environments [1]. Accumulations of secondary metabolites are widely stimulated by various stresses [2]. Signal transduction is a necessary cellar process for secondary metabolite accumulation in plants subjected to stresses. A better understanding of signal transduction involved in secondary metabolism will not only improve our knowledge of fundamental biology, but also lead to the production of useful secondary metabolites. Drought, a globe problem, has been shown to increase the amounts of secondary metabolites, including terpenoids [3]. Nitric oxide (NO) and abscisic acid (ABA) are well-known signal molecules induced in plants by various stresses, including water stress. ABA is defined as a stress plant hormone because of its rapid accumulation in response to water stress, and it plays a major role in the regulation of plant growth, development and tolerance under stress [4]. It has been reported that ABA can induce the accumulation of terpenoids in plants [5]. NO has been intensively studied to elucidate the role of this enigmatic signaling molecule in response to abiotic and biotic stresses such as drought stress and heat stress [6]. Nω-nitro-L-arginine methyl ester (l-NAME) is a specific inhibitor of NO synthase [7], and 2-(4-Carboxyphenyl)-4,4,5,5-tetramethylimidazoline-1-oxyl-3-oxide (c-PTIO) is a scavenger of NO in cells. Drought stress also induces generation of NO [8]. The effects of NO on terpenoid production have been widely observed [9]. In maize leaves, NO mediates brassinosteroid-induced ABA biosynthesis involved in oxidative stress tolerance [7]. There is also evidence that NO accumulation in guard cells in response to osmotic stress mediates ABA-induced stomatal closure [10].
Salvia miltiorrhiza, one of the most popular traditional Chinese medicines, has been widely used in prevention and treatment of coronary heart disease [11]. Tanshinones, a group of diterpenoids, are the main biologically active ingredients in S. miltiorrhiza. Tanshinones are biosynthesized via the mevalonate (MVA) pathway in the cytosol and the 2-C-methyl-d-erythritol-4-phosphate (MEP) pathway in the plastids [12]. 3-Hydroxy-3-methylglutarylcoenzyme A reductase (HMGR) is the rate-limiting enzyme in the MVA pathway, and mevinolin (MEV) is a highly specific inhibitor of HMGR [13]. 1-Deoxy-d-xylulose 5-phosphate reductoisomerase (DXR) is the second enzyme in the MEP pathway, and fosmidomycin (FOS) is a specific inhibitor of DXR. Previous work revealed that tanshinone accumulations in S. miltiorrhiza were mainly from the MEP pathway, but could partially depend on the crosstalk between the two pathways [12,14]. Our previous work revealed that tanshinone accumulation in S. miltiorrhiza was stimulated by water stress in pot experiments [15]. In S. miltiorrhiza hairy roots, both polyethylene glycol (PEG) and ABA could enhance tanshinone production via the MEP pathway [16]. Application of sodium nitroprusside (SNP), a donor of NO, also resulted in a significant increase of tanshinone production [17]. However, the role(s) of NO in water stress-induced tanshinone is still unclear. In this work, we revealed that SNP mainly stimulated the MEP pathway to increase tanshinone accumulation. NO signaling probably plays a central role in water stress-induced tanshinone production in S. miltiorrhiza hairy roots.

2.2. Effects of c-PTIO and l-NAME on Water Stress-Induced Tanshinone Production

To elucidate further roles of NO in PEG- and ABA-induced tanshinone production, NO production in S. miltiorrhiza hairy roots was determined. As shown in Figure 3, NO productions were significantly stimulated by PEG and ABA treatments (1.5 and 1.7-fold of the control) and reached to 1.7 and 2.0 µmol·g−1·FW. Increases of NO accumulation induced by PEG and ABA were largely arrested by c-PTIO and l-NAME, and reduced to the control level. NO content was only slightly influenced by either c-PTIO or l-NAME. This further confirmed our conclusion that PEG and ABA-induced tanshinone production depended on NO signaling. 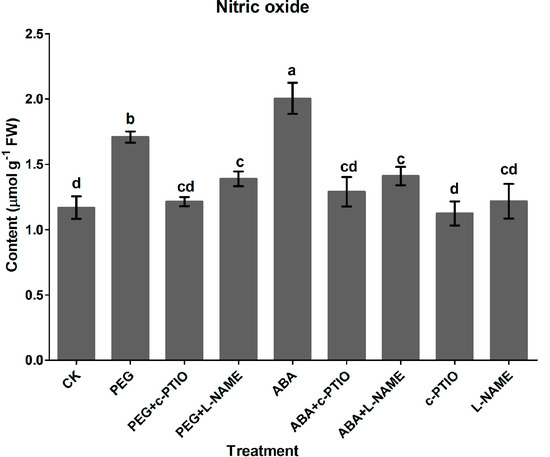 2.4. Effects of Water Stress on Expressions of HMGR and DXR

NO as a biological signaling molecule has been observed to be induced by various environmental stresses and elicitors, such as drought [8], salt [21], fungal elicitors [22], ABA [10], SNP [8] and MJ [23]. Some studies have shown that NO is involved in secondary metabolism. In Catharanthus roseus cell suspension cultures, SNP triggered terpenoid indole alkaloid biosynthesis [24]. In Taxus cells, NO plays a signal role in the ultrasound and cerebroside-induced taxol production [9]. In our previous work, we found that tanshinone production was significantly increased by SNP [17]. The results held true in this work. Tanshinone production in S. miltiorrhiza hairy roots was significantly stimulated by 100 μM SNP. Simultaneously, expressions of HMGR and DXR were both up-regulated by SNP. This work confirmed that NO was an effective elicitor for tanshinone production. Our previous work has revealed that the MEP pathway plays a major role in tanshinone production under PEG and ABA treatment [13,17]. In the present experiments, we found that effects of SNP were just partially arrested by mevinolin, but completely inhibited by fosmidomycin. The results indicated that both the MVA and the MEP pathways were induced by SNP, but the MEP pathway probably contributed mainly to SNP-induced tanshinone production.
Roles of NO in water stress-induced responses of plants have been widely reported. In Vicia faba, NO production was largely promoted by PEG and was completely inhibited by l-NAME [8]. It was believed that NO signaling mediated drought-induced ABA biosynthesis [7]. There was also evidence that ABA enhanced NO biosynthesis in stomatal guard cells [10] and NO induced ABA accumulation in root tips of wheat seedlings [25]. Our previous work has revealed that contents of tanshinone components in S. miltiorrhiza were significantly improved by drought stress in pot experiments [15]. PEG and ABA can enhance tanshinone production in S. miltiorrhiza hairy roots [16,26]. These previous observations were confirmed in the present work. Tanshinone production and expressions of HMGR and DXR in S. miltiorrhiza hairy roots were significantly induced by PEG and ABA. However, the role(s) of NO in water-induced tanshinone production are still unclear. The role of NO in terpenoid production has been widely observed [9]. In Taxus cells, a rapid production of NO was induced by MJ and it was shown that NO signaling is involved in MJ-induced taxol production [23]. More and more studies have revealed the interactions of NO with ABA signaling [7,25]. The induction of ABA by drought was strongly blocked by pretreating the root tips with nitric oxide synthase inhibitor, and SNP can also induce ABA accumulation in root tips of wheat seedlings [25]. We found that the increase of tanshinone accumulations and up-regulation of HMGR and DXR expressions by PEG and ABA treatments were inhibited by l-NAME and c-PTIO. Simultaneously, NO generations triggered by PEG and ABA were also arrested by l-NAME and c-PTIO. The results demonstrated that NO probably mediated PEG and ABA-induced tanshinone production.

Content of nitric oxidein hairy roots was determined by nitric oxide determination kit (Nanjing Jiancheng, Nanjing, Jiangshu, China) according to manufacturer’s direction. Because NO has a short half-life (2–30 s), it is quickly oxidized to nitrite (NO2−) and nitrate (NO3−) in the tissue. NO3− can be converted into NO2− by nitrate reductase, and NO2− can be detected spectrophotometrically using the Griess Reaction. This kit is sensitive, stable and simple to use, with a major advantage of measuring the total amount of NO3− and NO2− through nitrate reductase.

4.3. Extraction and HPLC Analysis of Tanshinone

Table 1. The primers of genes in RT-PCR.