The objective of this study was to identify the major volatile compounds and their relative concentrations in flowers of different chrysanthemum cultivars and their wild relatives. The volatile organic components of fresh flowers were analyzed using a headspace solid-phase microextraction coupled with gas chromatography-mass spectrometry. In total, 193 volatile organic components were detected; the major scent components were monoterpenoids and oxygenated monoterpenoids, which accounted for 68.59%–99.93% of the total volatiles in all tested materials except for Chrysanthemum indicum collected from Huangshan, in which they accounted for only 37.45% of total volatiles. The major volatile compounds were camphor, α-pinene, chrysanthenone, safranal, myrcene, eucalyptol, 2,4,5,6,7,7ab-hexahydro-1H-indene, verbenone, β-phellandrene and camphene. In a hierarchical cluster analysis, 39 accessions of Chrysanthemum and its relatives formed six clusters based on their floral volatile compounds. In a principal component analysis, only spider type flowers were located closely on the score plot. The results of this study provide a basis for breeding chrysanthemum cultivars which desirable floral scents. View Full-Text
Keywords: Chrysanthemum morifolium; floral scent; GC-MS; SPME; volatile Chrysanthemum morifolium; floral scent; GC-MS; SPME; volatile
►▼ Show Figures 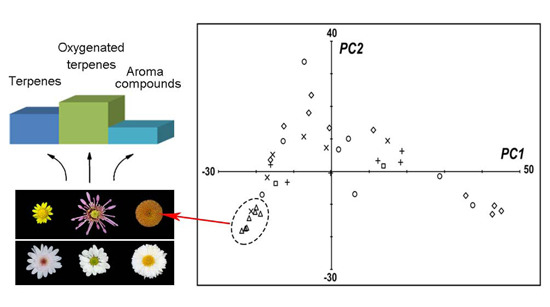