In the global beauty industry, multinational corporations such as L’Oreal, Estée Lauder, and Procter & Gamble earn billions of dollars every year by selling skin care products and cosmetics [1]. The ideal skin tone, according to traditional Eastern Asian cultural beliefs, is white [2]. Since the Edo period in Japan (1603–1868), women have had a “moral duty” to apply white powder to their faces [3]. In South Korea, both women and men strive for skin that is as white as pale jade [2]. As the old Chinese adage states, “A white complexion is powerful enough to hide seven faults” [4]. For these reasons, Eastern Asian women have sought pale white skin for hundreds of years [5]. A study of the sexual preference of women and men in China determined that the male participants preferred women with lighter skin tones over those with darker complexions [6]. Another study indicated that tan skin indicates a blue collar socioeconomic status, whereas pale skin represents a white collar status [1]. Therefore, numerous skin care products labeled skin “whitening” or “lightening” comprise the best-selling product lines in the Asian cosmetics market [7]. Scientists have proved that numerous skin-whitening agents added to products effectively reduce melanin, which is the main source of skin color [8].
When humans are exposed to unlimited UV light, melanogenesis causes hyperpigmentation through the overproduction of melanin, which causes the skin to tan [9]. Tyrosinase is the key enzyme in the melanin biosynthesis pathway [10]. Hydroxylated l-tyrosine produces l-3,4-dihydroxyphenylalanine (l-DOPA), which is oxidized to the corresponding o-quinone [11]. Tyrosinase inhibitors can be categorized into competitive, uncompetitive, and noncompetitive inhibitors [12]. Although most methods for skin lightening involve inhibiting tyrosinase [13], skin lightening can be achieved using other methods, such as epidermal turnover enhancement [14,15,16,17] and antioxidation agents [18]. Enhancers of epidermal turnover reduce melanin by accelerating epidermal turnover time [19,20], and antioxidants reduce reactive oxygen species that induce melanogenesis caused by UV irradiation [21].
Tyrosinase inhibitors such as l-ascorbic acid [22,23,24], kojic acid [25,26,27], ellagic acid [28,29,30], tranexamic acid [31,32,33], and hydroquinone [34,35,36] have been used as skin-whitening agents, albeit not without problems. For example, l-ascorbic acid is heat sensitive and degrades easily [37]; kojic acid can trigger allergic reactions such as contact dermatitis and sensitization [38] and has carcinogenic potential [39,40]; ellagic acid is insoluble and has poor bioavailability [41]; the melanogenesis inhibition pathway of tranexamic acid remains undetermined [32]; and long-term use of hydroquinone causes exogenous ochronosis [42,43]. Epidermal turnover enhancers only remove the melanin in the uppermost layer of the epidermis [44], and antioxidants, such as various botanical extracts, induce contact dermatitis [45]. Because of these problems, scientists have endeavored to develop alternative skin-whitening techniques.
Mushroom tyrosinase has been used for prescreening hypopigmentation agents because it is commercially available. However, it was found that many melanogenesis inhibitors didn’t exhibit inhibitory effects on mushroom tyrosinase activity [46,47,48,49]. Mushroom tyrosinase is a secreted form which doesn’t resemble mammalian tyrosinase [50,51,52]. Cytosolic mammalian tyrosinase is an inactive form which will be glycosylated in the Golgi complex. Then, glycosylated mammalian tyrosinase is delivered to melanosomes wherein the enzyme is membrane-bound form and phosphoactivated by PKCβ [50,53,54]. In addition, melanogenesis involves sophisticated signal pathways (Figure 1) [53,54,55,56]. For example, UV radiation (UVR), the most important extrinsic factor of melanogenesis, increases α-melanocyte-stimulating hormone (α-MSH) binding to melanocortin 1 receptor (MC1R) followed by activating adenylate cyclase, increasing cAMP levels, activating the enzyme protein kinase A (PKA), and inducing gene transcription of microphthalmia-associated transcription factor (MITF), leading to transcription of the melanogenic enzyme tyrosinase [53,54,57,58,59,60,61]. Norepinephrine/α1 or β2 adrenergic receptor and UV radiation induce diacylglycerol (DAG) release from the cell membrane. DAG activates protein kinase C-β (PKC-β), which then phosphorylates serine residues on tyrosinase and activates the enzyme [53,54]. Binding stem cell factor (SCF) to c-kit results in dimerization of receptors followed by activating mitogen-activated protein kinase (MAPK) cascade [53,62]. The MAPK family proteins, including p38, ERK, and JNK, are known to play crucial roles in melanogenesis [56,62,63]. The ERK and JNK pathways cause downregulation (−) of melanin synthesis. In contrast, the phosphorylation of p38 will activate (+) MITF expression, which in turn transcriptionally upregulates the expression of melanogenic enzymes such as tyrosinase, TRP-1, and TRP-2, eventually inducing melanin production [55,56,57] (Figure 1). The nitric oxide (NO) signaling pathway plays a very important role in UVR-induced melanogenesis. Enhancement of tyrosinase gene expression via the cGMP pathway with the expression of MITF is a primary mechanism of NO-induced melanogenesis [53,54,64]. Inhibition of phosphatidylinositol 3-kinase (PI3K) by cAMP will result in reduction of AKT phosphorylation and its activation. Therefore, AKT cannot phosphorylate GSK 3β. In turn cAMP decreases the phosphorylation of GSK 3β and stimulates its activity [55,62,65,66] (Figure 1). Therefore, activation of GSK3β by cAMP facilitates MITF binding to the tyrosinase promoter and leading to stimulation of melanogenesis. The hypopigmentation mechanism of many melanogenesis inhibitors is to modulate the regulators of signal pathways instead of inhibiting tyrosinase activity. Therefore, the mushroom tyrosinase inhibitors have to be proved to inhibit melanogenesis in vitro, or they are not classified to hypopigmentation agents. This study investigates the difference between tyrosinase inhibitors and melanogenesis inhibitors of fermented broths including active ingredients, signal pathway regulators and mechanism. 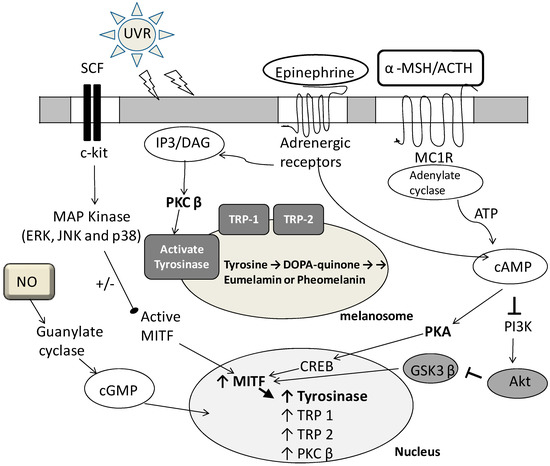 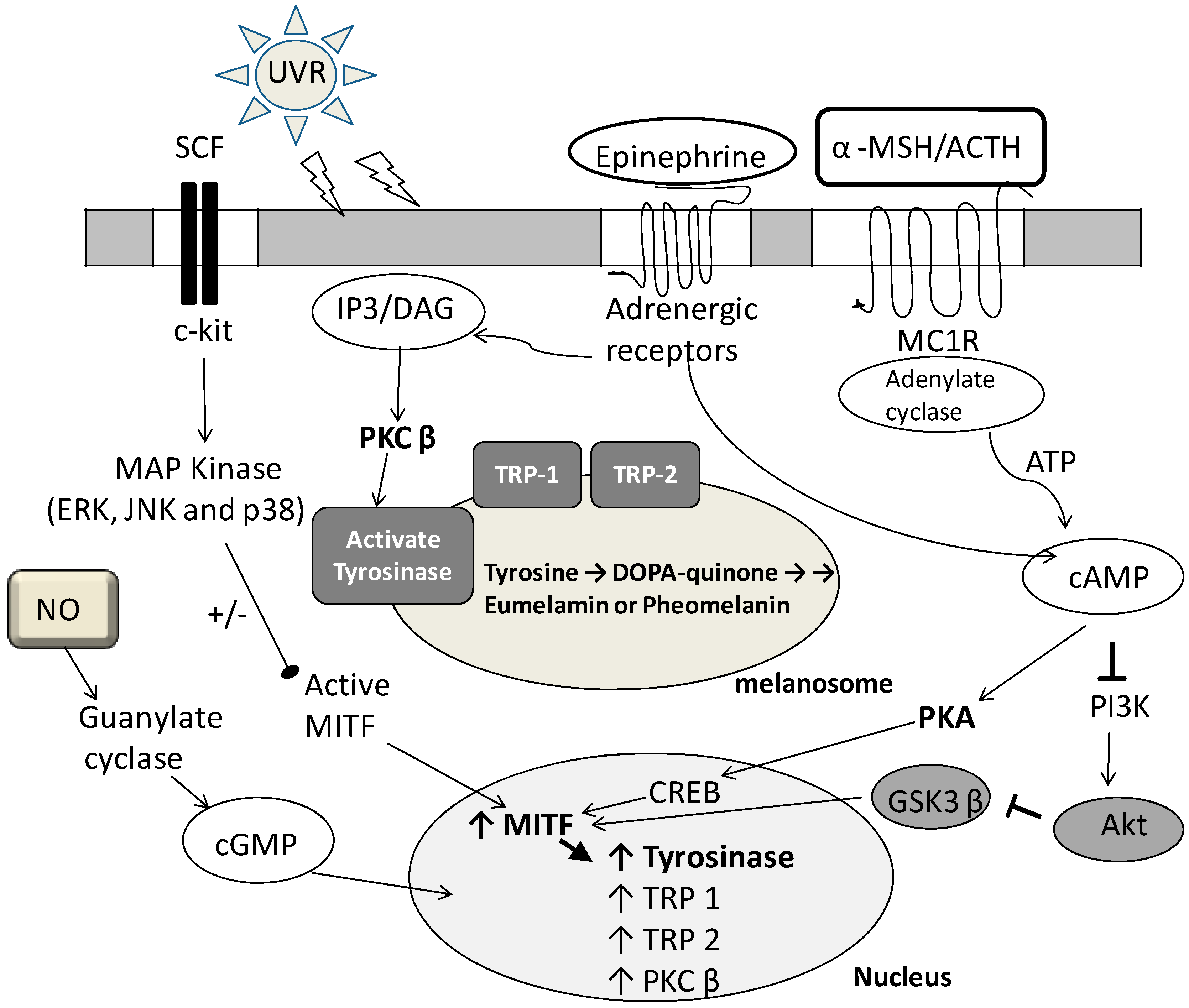 Microorganisms such as bacteria, yeasts, and molds are commonly employed in fermentation [67]. For example, probiotics are used in dairy products, fermented vegetables, fish and sausages, and as silage inoculants [68]. Human clinical trials have explored the use of numerous probiotic supplements to treat skin disorders [69]. Skin products containing fermented broth have been launched in the market. Pitera by SK-II is fermented by yeast to whiten the skin [70]. Numerous reports have indicated that fermented broth can inhibit tyrosinase activity and melanogenesis [9,11,46,47,48,49,71]. However, no study has reviewed these findings, thus this review describes the process by which fermented broth suppresses melanogenesis and the possible active whitening ingredients found in the broth.

The components of fermented broth include carbohydrates, alcohols, alditols, glycols, and other metabolic products [73]. According to Table 1, Lactobacilli and Bifidobacteria are the two major genera of bacteria of which the broth is used to suppress melanogenesis; scientists have long used them to solve dermal problems [90]. Various studies have also used broth fermented by bacteria or fungi not classified as Lactobacilli and Bifidobacteria to inhibit melanogenesis. However, the mechanism of action of fermented broth in skin pigmentation regulation remains unclear. The possible active ingredients that could suppress melanogenesis are listed in Table 2 and discussed below.

The lactic acid contained in Lactobacillus rhamnosus is crucial to inhibit tyrosinase activity and can reduce melanogenesis [71] (Table 1). Lactic acid is an effective exfoliating agent that improves skin color [91] and can suppress tyrosinase activity [92]. One report indicated that lactic acid can increase epidermal thickness, reduce melanin deposition, and upregulate collagen levels because it is derived from sour milk, like α-hydroxyacids (AHAs) [18]. AHAs accelerate desquamation of the stratum corneum to reduce tyrosinase without affecting messenger-RNA or protein expression [93]. In short, lactic acid functions as other enhancers of epidermal turnover do.

Previous research has explored fermenting plants such as ginseng, rice bran, and meshima to enhance their bioactivity and active contents [80]. Fermented rice bran is rich in kaempferol, which is a flavonoid that can reduce tyrosinase [94]. A paper discussing raw materials (nonfermented rice bran) determined that they do not inhibit tyrosinase activity [83]. Similarly, fermented red ginseng exhibits a flavonoid content nearly 15-fold greater than that of unfermented red ginseng [80]. Fungal-fermented traditional herbs such as meshima exhibit much higher mushroom tyrosinase- and melanogenesis inhibitory activity because they have a greater flavonoid and phenolic content than unfermented products do [77] (Table 2). The hypopigmentation mechanism of fermented broth from P. linteus complex culture/Phellinus linteus involved inhibition of tyrosinase activity, downregulation of MITF, TRP1 and TRP2, and activation of the phosphatidylinositol 3-kinase/Akt/glycogen synthase kinase-3beta [77]. The aglycones dadzein and genistein which are isoflavonoids derived from soy milk fermented by Lactobacillus plantarum are constituents that inhibit melanogenesis in B16F10 melanocytes by inhibiting tyrosinase expression, downregulating MITF, inactiving MAPK and p38 [74] (Table 2). Moreover, soybeans fermented with Aspergillus oryzae, which is a filamentous fungus, can reduce B16 cellular melanin production by 46.7% due to increased levels of 8-hydroxydaidzein and 3-hydroxydaidzein [47] (Table 2). Hydroxydaidzeins derived from isoflavones act indirectly on melanin biosynthesis, reducing microphthalmia-associated transcription factor transcription and, thus, downregulating TRP-1 and TRP-2 expression [47] (Table 2). Flavonoids such as resveratrol [20,58], aloesin [95], and fermented soybeans and their byproducts inhibit tyrosinase. However, reports have controversially indicated that not all flavonoids lighten the skin, but rather increase melanogenesis [58,96,97].

Many antioxidants exhibit depigmentation properties that interfere with the lipid peroxidation of melanocyte membranes and increase intracellular glutathione content [98]. Intracellular glutathione acts as an antioxidant that determines the expression of a melanin-based signal [99]. Hence, antioxidants may play a crucial role in melanin production regulation. The Bifidobacteria reported in [9,11,79] had overpowering antioxidant activity in 2,2-diphenyl-1-picrylhydrazyl scavenging capacity and 2,2'-azino-bis(3-ethylbenzthiazoline-6-sulphonic acid) radical scavenging activity assays (Table 2). Broth from rice, black rice, sweet potato and barley fermented with Saccharomyces cerevisiae and Aspergillus niger contained higher contents of polyphenolic compounds, including protocatechuic acid, catechin, caffeic acid, ferulic acid, p-hydroxybenzoic acid and also exhibited potent antioxidative activity which may be related to their melanogenesis reduction [89]. The content of polyphenolic compounds is in the order of barley > black rice > sweet potato > rice.

There are some novel melanogenesis inhibitors such as albocycline K3 (a mcrocyclic compound) and byelyankacin purified from fermented broths of seed medium/Stveptomyces sp. and seed edium/Enterobacter sp. B20, respectively [48,76] (Table 2). The hypopigmentation mechanism of albocycline K3 is still unknown and the hypopigmentation mechanism of byelyankacin may be through inhibiting tyrosinase activity [48,76] (Table 2). The results indicated that fermented broths have great potential to produce new potent natural melanogenesis inhibitors which can be applied as beneficial and safe skin whitening products.
Autolysate of Leuconostoc mesenteroides isolated from kimoto induced a decrease in melanin content in B16F0 murine melanoma cells through inhibiting tyrosinase activity, tyrosinase translation, or accelerating its degradation but did not inhibit tyrosinase activity under cell-free conditions [47]. The autolysate of L. mesenteroides has potential use as an effective anti-melanogenic agent. However, the active ingredient responsible has still not been determined.

Cosmetic products using probiotics such as bacteria and yeast include aftershaves, antiaging serums, face and body lotions, hydrating creams, toothpastes, sanitary napkins, tampons, shampoos, douche gels, and oral care gums [100]. However, whitening cosmetic products containing fermented broth are limited because some obstacles such as foul odors and allergens need to be overcome [100]. Nevertheless, SK-II has launched whitening and antiaging products that contain Saccharomycopsis fermented broth [101,102] that have been scientifically proved to be effective in whitening. Scientists can conduct further research by adding fermented broth to cosmetic products and explore the capability of fermented broth for reducing melanogenesis. In addition, cosmetic companies can use several active ingredients that target different whitening mechanisms, such as tyrosinase inhibitors, epidermal turnover enhancers, antioxidants, TRP1 inhibitors, TRP2 inhibitors and MITF inhibitors, for effective complex mixtures [13].