In this work, the volatile fraction of unsmoked and smoked Herreño cheese, a type of soft cheese from the Canary Islands, has been characterized for the first time. In order to evaluate if the position in the smokehouse could influence the volatile profile of the smoked variety, cheeses smoked at two different heights were studied. The volatile components were extracted by Solid Phase Microextraction using a divinylbenzene/carboxen/ polydimethylsiloxane fiber, followed by Gas Chromatography/Mass Spectrometry. In total, 228 components were detected. The most numerous groups of components in the unsmoked Herreño cheese were hydrocarbons, followed by terpenes and sesquiterpenes, whereas acids and ketones were the most abundant. It is worth noticing the high number of aldehydes and ketones, and the low number of alcohols and esters in this cheese in relation to others, as well as the presence of some specific unsaturated hydrocarbons, terpenes, sesquiterpenes and nitrogenated derivatives. The smoking process enriches the volatile profile of Herreño cheese with ketones and diketones, methyl esters, aliphatic and aromatic aldehydes, hydrocarbons, terpenes, nitrogenated compounds, and especially with ethers and phenolic derivatives. Among these, methylindanones or certain terpenes like α-terpinolene, have not been detected previously in other types of smoked cheese. Lastly, the results obtained suggest a slightly higher smoking degree in the cheeses smoked at a greater height. View Full-Text
Keywords: smoked and unsmoked Herreño cheese; headspace components; solid phase microextraction; gas chromatography-mass spectrometry smoked and unsmoked Herreño cheese; headspace components; solid phase microextraction; gas chromatography-mass spectrometry
►▼ Show Figures 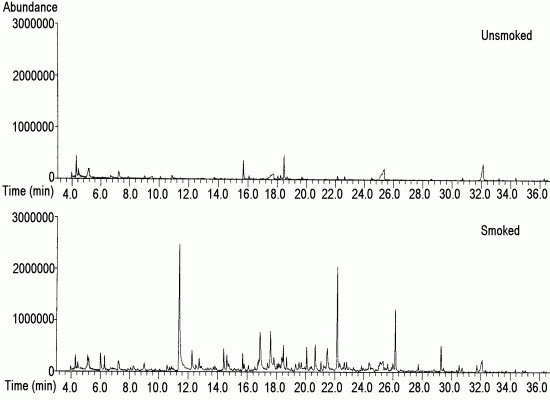