Asperaculanes A and B, Two Sesquiterpenoids from the Fungus Aspergillus aculeatus
Previous Article in Journal

Chemical Constituents from Licania cruegeriana and Their Cardiovascular and Antiplatelet Effects

Anti-Depressant-Like Effect of Kaempferitrin Isolated from Justicia spicigera Schltdl (Acanthaceae) in Two Behavior Models in Mice: Evidence for the Involvement of the Serotonergic System

We evaluated the antidepressant-like effect of kaempferitrin (Km) isolated from the plant Justicia spicigera (Asteraceae), which is used in traditional medicine for relieving emotional disorders, such as “la tristeza” (sadness or dysthymia) and “el humor” (mood changes). The actions of Km were evaluated in a forced swimming test (FST) and a suspension tail test (TST) in mice. We explored the involvement of the serotonergic system and the hypothalamic-hypophysis-adrenal axis (HPA) in the antidepressant-like effect of Km. To evaluate nonspecific effects of Km on general activity, the open field test (OFT) was performed. Km at 5, 10, and 20 mg/kg induced an antidepressant-like effect. Sub-effective dose of Km (1 mg/kg) produced a synergistic effect with imipramine (6.25 mg/kg) and fluoxetine (10 mg/kg) but not with desipramine (3.12 mg/kg). Pretreatment with p-chlorophenylalanine methyl ester (PCPA), a serotonin synthesis inhibitor, N-{2-(4-(2-methoxyphenyl)-1-piperazinyl}-N-(2-pyridinyl)cyclohexecarboxamide (WAY-100635), a selective 5-HT1A receptor antagonist, and 8OH-DPAT, a selective 5-HT1A agonist, but not pindolol (10 mg/kg) blocked the anti- immobility effect induced by Km. Taken together, these results indicate that the antidepressant-like effect of Km is related to the serotonergic system, principally 5-HT1A. This effect was not related to changes in locomotor activity. View Full-Text
Keywords: antidepressant; muitle; Justicia spicigera; serotonergic actions; kaempferitrin antidepressant; muitle; Justicia spicigera; serotonergic actions; kaempferitrin
►▼ Show Figures 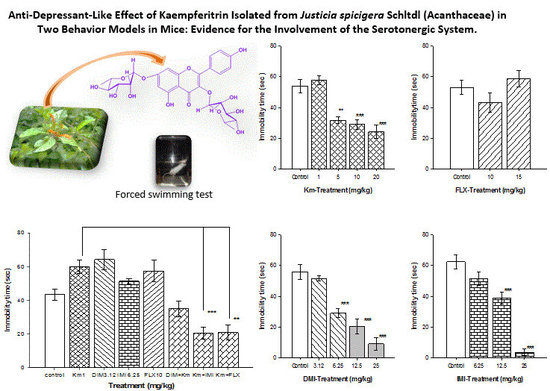