This study focused on the assessment of the vasorelaxant activity of the organic and aqueous extracts obtained from leaves and fruits of a Mexican hawthorn (Crataegus gracilior) on isolated rat aorta, and on the purification and identification of some of their secondary metabolites by the use of chromatographic and spectroscopic techniques. The results obtained showed that the methanol extract has a significantly more potent and effective vasorelaxant effect than the other tested extracts, with an EC50 = 8.69 ± 4.34 µg/mL and an Emax = 94.6% ± 11.30%, values that are close to that of acetylcholine, the positive control. From the same extract, two major triterpenes were isolated and identified as ursolic and corosolic acids by comparison of their experimental NMR spectroscopic data with those reported in the literature. Chlorogenic acid, rutin, quercetin, kaempferol and (+)-catechin were also identified using HPLC coupled with PDAD. All these compounds have already been proven to possess on their own antihypertensive effect and other benefits on cardiovascular diseases and they can support, at least in part, the traditional use of this plant species. View Full-Text
Keywords: Crataegus gracilior; aorta; vasorelaxation; phenolics; triterpenes Crataegus gracilior; aorta; vasorelaxation; phenolics; triterpenes
►▼ Show Figures 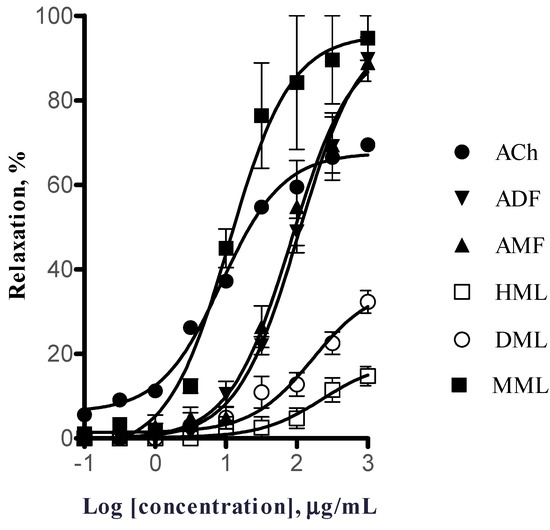