Tendon injury is one of the most frequent injuries in sport activities. Most tendon injuries are resulted from a tear of tendon fibers due to overuse, aging or accident. The healing of a ruptured tendon is known to be difficult and the repair of completely torn tendon is, therefore, often relies on surgery. Tendon is composed of cells (tendon fibroblasts) and extracellular matrix, which contains mostly type I collagen, type III collagen and glycoproteins. The process of tendon healing is classified into three stages: inflammation, regeneration, and remodeling. In the regeneration stage, tendon fibroblasts migrate into the injured site, proliferate and produce different types of collagens and glycoproteins to form the extracellular matrix. The whole process takes a long time to complete and the healed tendon is always weaker than the tendon before injury [1,2,3]. Therefore, it is important to develop a new therapeutic approach to accelerate the healing and/or improve the strength of tendon.
There are several growth factors involved in the healing process. Insulin-like growth factor, platelet-derived growth factor, transforming growth factor-β, basic fibroblast growth factor and vascular endothelial growth factor are among those mostly mentioned [4,5]. In addition, growth hormone, an anabolic peptide secreted from the anterior pituitary, can also promote tissue regeneration and cell proliferation, especially for the growth of skeletal muscle and bone [6,7]. Growth hormone can also increase the secretion of collagens in different kinds of cultured cells [8,9,10,11]. Through the binding with growth hormone receptor on the cell membrane, the action of growth hormone is mediated directly by the activation of tyrosine kinase or indirectly by induction of insulin-like growth factor [12].
BPC 157 is a pentadecapeptide containing partial sequence of the body protection compound (BPC) isolated from the human gastric juice [13]. It is stable and resistant to hydrolysis or digestion by enzymes. Previous studies have demonstrated the promoting effect of BPC 157 on the healing of different tissues, including skin, mucosa, cornea, muscle, tendon, ligament and bone in animal studies [14,15,16,17,18,19,20,21,22,23,24]. The mechanism by which pentadecapeptide BPC 157 accelerates healing is not clearly understood. It has been suggested to include up-regulation of growth factors [25], proangiogenic effect [26,27], and modulation of nitric oxide (NO) synthesis. BPC 157 may also control functions of collagen fragments that are associated with bone morphogenic proteins. However, none of these functions have been proved experimentally in tendon.
The present study attempted to elucidate the potential mechanism by which BPC 157 works on tendon fibroblasts to improve the tendon healing. From our previous study by cDNA microarray, the expression of growth hormone receptor gene was one of the most up-regulated in tendon fibroblasts treated with BPC 157. We therefore focused this study on the effect of BPC 157 on this gene.

In order to find out the potential mechanism by which BPC 157 improves the healing of tendon, we performed a cDNA microarray in a previous study and the expression of growth hormone receptor gene was one of the most up-regulated in tendon fibroblasts treated with BPC 157 (Table 1).

Table 1. Genes up-regulated in tendon fibroblasts by BPC 157.
To further confirm this result, we treated tendon fibroblasts with BPC 157 at different concentrations (0, 0.1, 0.25 and 0.5 μg/mL) for 24 h and the expression of growth hormone receptor was found to increase in a dose-dependent manner (Figure 1A,C). More interestingly, BPC 157, at the concentration of 0.5 μg/mL, significantly induced the expression of growth hormone receptor in tendon fibroblasts time-dependently from day one to day three (Figure 1B,D). Both the RNA and protein levels were determined by RT/real-time PCR (Figure 1A,B) and Western blotting (Figure 1C,D), respectively. Up to sevenfold increases could be observed at day three. 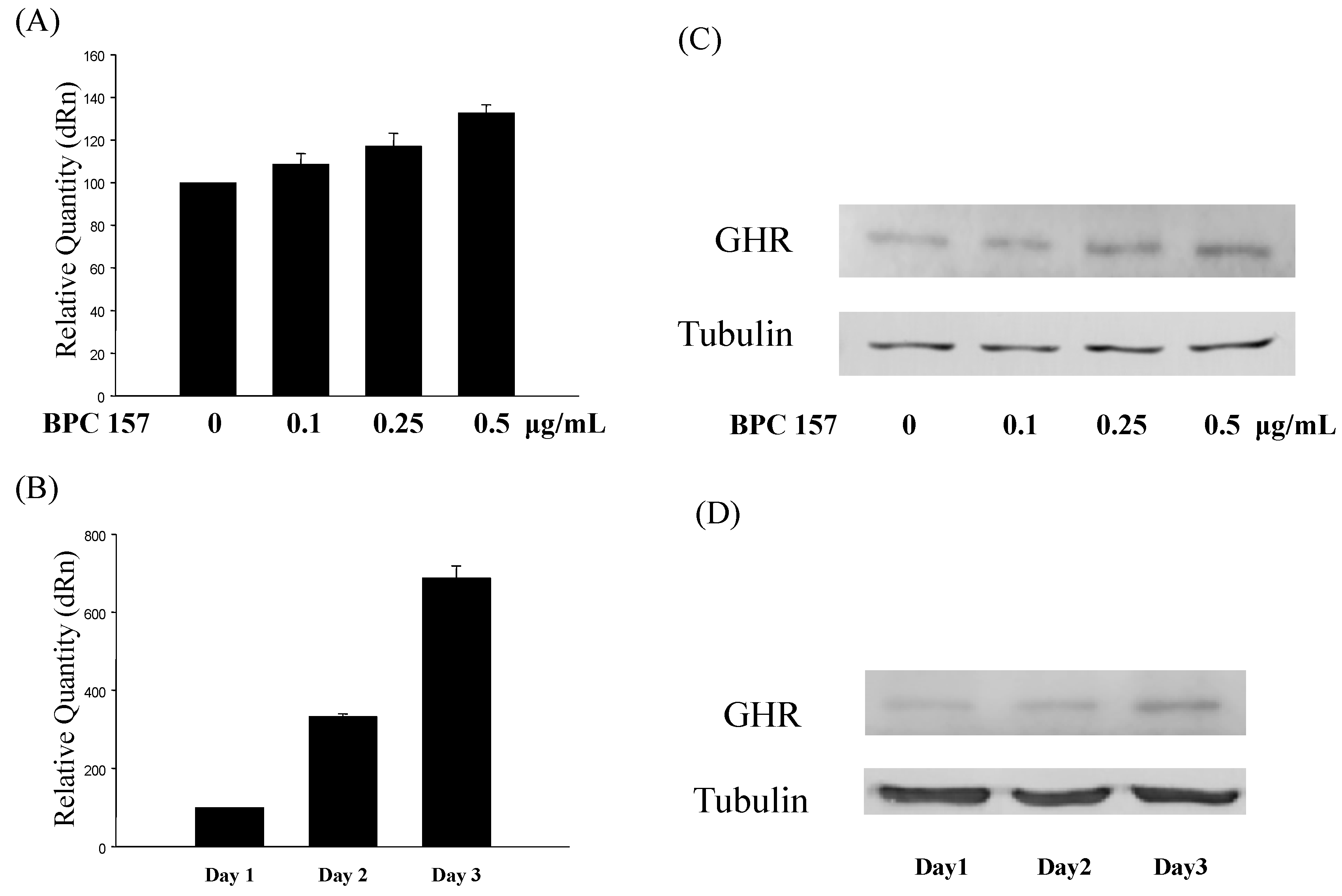 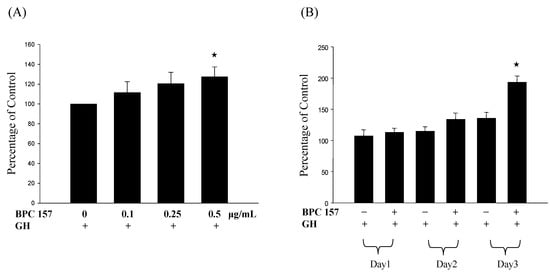 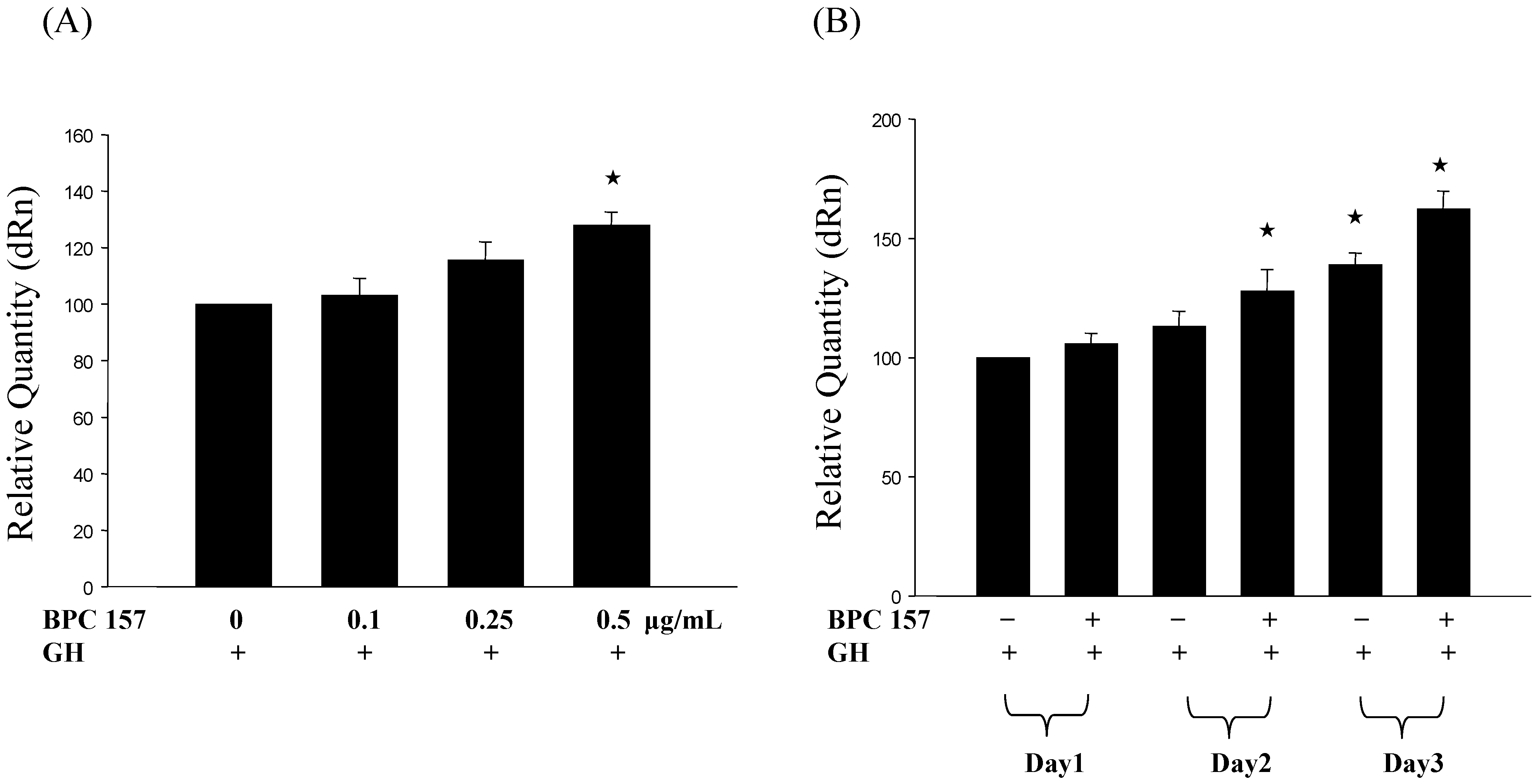 Through the JAK-STAT signaling pathway, growth hormone can exert the growth-stimulating effects on different tissues. Therefore, we investigated the effect of growth hormone on the activation of Jak2 in BPC 157-treated tendon fibroblasts. As shown in Figure 4, the addition of 1 μg/mL growth hormone did activate Jak2 signal pathway in tendon fibroblasts pretreated with 0.5 μg/mL BPC 157. Longer treatment with BPC 157, the level of phosphorylated but not the total amount of Jak2 was found to be higher by the stimulation with growth hormone.

Body protection compound (BPC, M.W. 40,000) was first discovered and isolated in human gastric juice and later a stable 15 amino acid fragment (Gly Glu Pro Pro Pro Gly Lys Pro Ala Asp Asp Ala Gly Leu Val, M.W. 1419, called BPC 157) with apparently no sequence homology to other known peptides, was found to be essential for BPC’s activity [23]. Although the detailed mechanism is poorly understood, BPC 157 appears to be beneficial to almost all organ systems in many species when very low dosages (mostly ng/kg to μg/kg range) after ip, ig, and intramucosal (local) application are used and no side effect or toxicity is found. Except the effects on various gastrointestinal lesions, the healing effects of BPC 157 have also been reported on pancreas, liver injuries, endothelium, heart damage and pseudoarthrosis. Interestingly, the healing of transected rat Achilles tendon could be accelerated by BPC 157 and even the early functional recovery of tendon to bone after Achilles detachment was found to be promoted by BPC 157 [19].

This study has been approved by the Institutional Animal Care and Use Committee before the procedures were performed. Male Sprague-Dawley rats, weighing 200 to 250 gm, were used as the source of tendon fibroblasts in this study. Achilles tendons were first harvested from rats by aseptic procedures. Each tendon was chopped into pieces at size about 1.5 to 2.0 mm3 and separately put into six-well culture plates. Then 3 mL culture medium made of Dulbecco’s modified Eagle’s medium with 10% FBS, 100 U/mL penicillin, and 100 mg/mL streptomycin was added to each well and maintained at 37 °C in a humidified atmosphere of 95% air and 5% CO2. After migrating out from the explants, tendon fibroblasts started to grow rapidly. After reaching confluency, the cells were subcultured by trypsinization at a 1:3 dilution ratio. Tendon fibroblasts between passages 2 and 4, having proper growth rate and normal fibroblast shape, were used in the following experiments. Each experiment was repeated three times using tendon fibroblasts isolated from a different rat.

Pentadecapeptide BPC 157 (GEPPPGKPADDAGLV, M.W. 1419) was synthesized and purchased from Kelowna International Scientific Inc., Taipei, Taiwan. BPC 157 was added to cells at the concentrations of 0 (control group), 0.1, 0.25 and 0.5 μg/mL. After incubation at 37 °C in a humidified atmosphere of 5% CO2/95% air for 1, 2 and 3 days, cells were collected for analysis of the expression of growth hormone receptors by RT PCR and Western blotting.

1 × 105 tendon fibroblasts were seeded in each well of 24-well culture plate, which contained culture medium made of 0.5 mL of DMEM, 10% FBS, 100 U/mL penicillin, and 100 mg/mL streptomycin in each well. BPC 157 was added into each well at the concentration of 0 (control group), 0.1, 0.25 and 0.5 μg/mL for 1, 2, and 3 days at 37 °C in a humidified atmosphere of 5% CO2/95% air. One day after the addition of growth hormone to the BPC 157-treated tendon fibroblasts, cells were washed once with 1xPBS, followed by adding 1 mL DMEM containing 0.05 mg/mL 3-[4,5-dimethylthiazol-2-yl]-2, 5-diphenyltetrazolium bromide (MTT). After incubation at 37 °C for 1 h, the media were removed and formazan crystals in the cells were dissolved in 1 mL DMSO and processed for OD reading at 570 nm using a spectrophotometer. The experiments were performed in triplicate.

All data were expressed as mean ± SEM. Quantification of phosphorylated Jak2 and tubulin expressions were performed by calculating the band density using 1D Digital Analysis Software (Kodak Digital ScienceTM, Eastman Kodak Company, Rochester, NY, USA). Comparisons between control group and experimental group were performed using Student’s t test. The level of statistical significance was set at a p value of 0.05. The “★” would be applied if there is statistically significant.

The authors would like to thank National Science Council of Taiwan and Chang Gung Memorial Hospital for supporting this work. The technical help of Miao-Sui Lin was greatly appreciated.

© 2014 by the authors. Licensee MDPI, Basel, Switzerland. This article is an open access article distributed under the terms and conditions of the Creative Commons Attribution license ( http://creativecommons.org/licenses/by/4.0/).