Kenaf (Hibiscus cannabinus) is cultivated worldwide for its fiber; however, the medicinal properties of this plant are currently attracting increasing attention. In this study, we investigated the expression levels of genes involved in the biosynthesis of kaempferitrin, a compound with many biological functions, in different kenaf organs. We found that phenylalanine ammonia lyase (HcPAL) was more highly expressed in stems than in other organs. Expression levels of cinnamate 4-hydroxylase (HcC4H) and 4-coumarate-CoA ligase (Hc4CL) were highest in mature leaves, followed by stems and young leaves, and lowest in roots and mature flowers. The expression of chalcone synthase (HcCHS), chalcone isomerase (HcCHI), and flavone 3-hydroxylase (HcF3H) was highest in young flowers, whereas that of flavone synthase (HcFLS) was highest in leaves. An analysis of kaempferitrin accumulation in the different organs of kenaf revealed that the accumulation of this compound was considerably higher (>10-fold) in leaves than in other organs. On the basis of a comparison of kaempferitrin contents with the expression levels of different genes in different organs, we speculate that HcFLS plays an important regulatory role in the kaempferitrin biosynthetic pathway in kenaf. View Full-Text
Keywords: flavone synthase; kaempferitrin; kenaf; phenylpropanoid biosynthesis flavone synthase; kaempferitrin; kenaf; phenylpropanoid biosynthesis
►▼ Show Figures 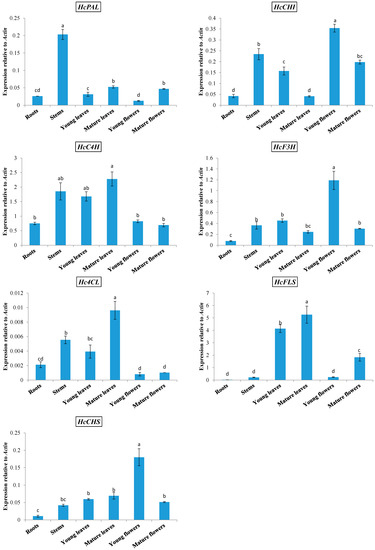