Article
Inhibition of Epstein-Barr Virus Lytic Cycle by an Ethyl Acetate Subfraction Separated from Polygonum cuspidatum Root and Its Major Component, Emodin
by

:
Polygonum cuspidatum is widely used as a medicinal herb in Asia. In this study, we examined the ethyl acetate subfraction F3 obtained from P. cuspidatum root and its major component, emodin, for their capacity to inhibit the Epstein-Barr virus (EBV) lytic cycle. The cell viability was determined by the MTT [3-(4,5-dimethyldiazol-2-yl)-2,5-diphenyltetrazolium bromide] method. The expression of EBV lytic proteins was analyzed by immunoblot, indirect immunofluorescence and flow cytometric assays. Real-time quantitative PCR was used to assess the EBV DNA replication and the transcription of lytic genes, including BRLF1 and BZLF1. Results showed that the F3 and its major component emodin inhibit the transcription of EBV immediate early genes, the expression of EBV lytic proteins, including Rta, Zta, and EA-D and reduces EBV DNA replication, showing that F3 and emodin are potentially useful as an anti-EBV drug.
Keywords:
Polygonum cuspidatum; emodin; antiviral activity; EBV

Epstein-Barr virus (EBV) is an oncogenic human herpesvirus, which infects lymphoid cells and epithelial cells [1]. Although the infection is often asymptomatic, it causes infectious mononucleosis and is associated with a number of human cancers, including Burkitt’s lymphoma [2], nasopharyngeal carcinoma (NPC) [3], Hodgkin’s disease [4] and gastric carcinoma [5]. There are two stages of the virus life cycle, the latent and lytic cycles. The reactivation of EBV from latency to the lytic cycle is necessary for the virus to produce virions and establish infections [6,7]. At onset of the lytic cycle, EBV expresses two transcription factors, Rta and Zta, which are transcribed from BRLF1 and BZLF1, respectively [8]. These two proteins trigger an ordered cascade of the expression of viral lytic genes, including that of BMRF1 and BALF5, which encoded diffused early antigen (EA-D) and DNA polymerase [9]. After EBV DNA replication, late genes, such as those encoding virus capsid antigens and membrane proteins, are expressed, followed by the production mature virions [10]. Some studies have suggested that the EBV lytic cycle causes tumorigenesis by the induction of cytokines [11]. Moreover, EBV lytic proteins have been shown to contribute to human pathology, such as Zta, suggested to induce the production of several oncogenic and inflammatory cytokines production [12,13]. Therefore, an effective strategy to block the viral lytic cycle is of value to prevent or treat EBV-associated disease and to improve the clinical outcome. The nucleoside analogs, such as acyclovir and ganciclovir, are frequently used to treat EBV infection, and have reported to be effective in infectious mononucleosis [14], post-transplant lymphoproliferative disorder [15], HIV-relative lymphoma and hairy leukoplakia [16]. Earlier studies have established that lytic EBV replication is inhibited by acyclovir and ganciclovir, which inhibit specifically the function of viral-encoded DNA polymerase [17], but not the expression of immediate-early or early lytic proteins. In addition to chemicals, epigallocatechin gallate (EGCG) [18], resveratrol [19], ethanolic extract from Andrographis paniculata and andrograpolide [20] are also suggested to be effective in inhibiting the EBV lytic cycle through suppressing the expression of the EBV immediate-early genes transcription and the expression of lytic proteins, including Rta, Zta and EA-D.
Polygonum cuspidatum is a herbal medicine commonly used for the treatment of atherosclerosis, as well as other medical ailments including cancers, asthma, hypertension and coughs [21]. The methanolic extract of P. cuspidatum root contains anthraglycoside B, physcion, piceid, emodin and resveratrol [22]. Previous studies showed that the ethanolic extract of P. cuspidatum inhibits hepatitis B virus replication [23] and EBV lytic cycle [24]. However, no study has reported on the inhibition of EBV immediate-early gene expression and DNA replication by emodin. Thus, the purpose of our study was to evaluate the ethyl acetate emodin-containing subfraction F3 separated from P. cuspidatum root and its major component, emodin, on the inhibition of the transcription of EBV immediate early genes, the expression of EBV lytic proteins, including Rta, Zta, and EA-D and DNA replication.

2.1. Analysis of Components in the Ethyl Acetate Subfraction F3 Isolated from Polygonum cuspidatum

The ethyl acetate subfraction F3 was obtained from the ethanolic extract of Polygonum cuspidatum root through partition with hexane and ethyl acetate and separation by semi-preparative high pressure liquid chromatography. Its components were analyzed by high liquid pressure chromatography and the identification of target compounds in F3 was based on their retention time and UV spectra, compared against a pure standard of emodin. We found that the peak eluting at 33.01 min could be ascribed to emodin (Figure 1). The amount of emodin in F3 was 68.2%.

2.2. Effect of F3 and Emodin on the Viability of P3HR1 Cells

The immediate early proteins, Rta and Zta transcription factors, are involved in lytic cycle, where they activate the expression of numerous early and late proteins, such as BMRF1 gene, EA-D. EA-D enhances the effectiveness of viral DNA polymerase and promotes EBV DNA replication, with the subsequent release of infectious virions. The detection of lytic proteins is a useful tool to examine the status of EBV lytic reactivation. The purpose of this study is to explore F3 and emodin whether inhibited the expression of EBV lytic proteins. P3HR1cells (3 × 106) were seeded for 24 h then treated with various concentration of F3 or emodin before sodium butyrate. After 24 h, cell extracts were harvested and the EBV lytic proteins, Rta, Zta and EA-D were analyzed by immunoblot analysis. These results showed that F3 and emodin significantly inhibited the expression of Rta, Zta and EA-D at the concentration of 3.1 μg/mL and 2.1 μg/mL, respectively. At 6.3 μg/mL of F3 and 4.2 μg/mL of emodin completely inhibited the expression of Rta, Zta and EA-D (Figure 3).

To further examine the inhibitory effects of F3 and emodin on the expression of EBV lytic proteins, we assessed the expression of Rta, Zta and EA-D by indirect immunofluorescence analysis. The staining results showed that 60% P3HR1 cells express Rta, Zta and EA-D at 24 h after SB treatment (Figure 4). Meanwhile, the percentages of Rta, Zta, EA-D positive cells were gradually reduced in a dose-dependent manner after treatment with F3 and emodin, following 24 h lytic induction by SB (Figure 4). These results strengthened the evidence that F3 and emodin inhibited the expression of EBV lytic proteins induced by sodium butyrate in EBV-positive cells. 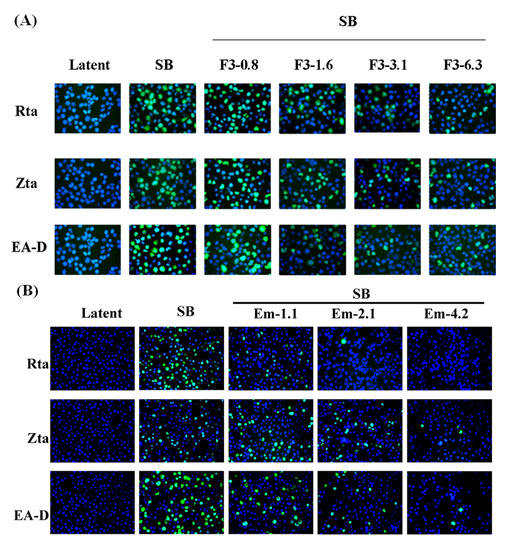 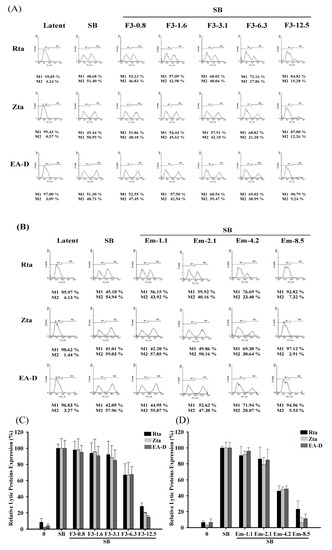 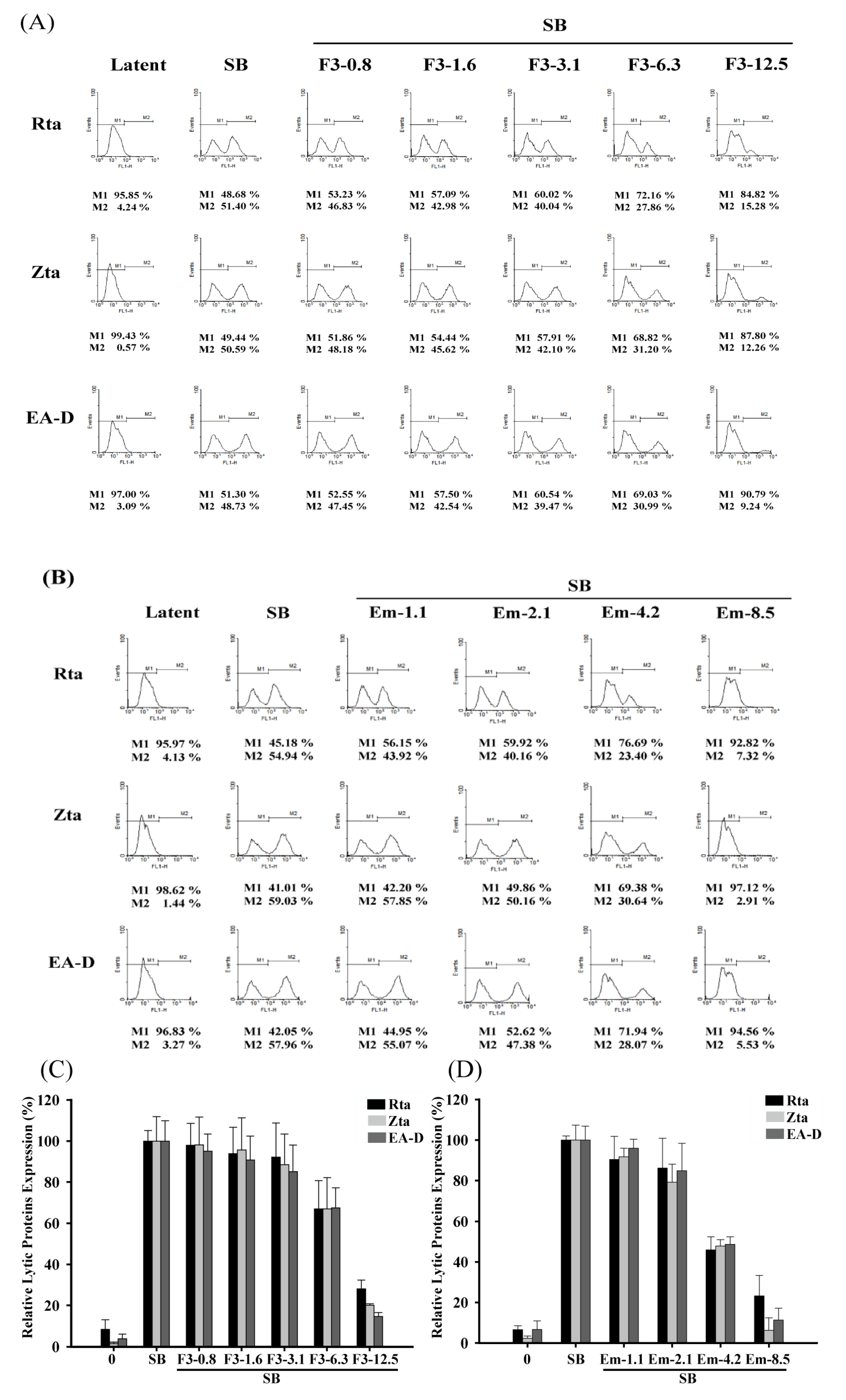 2.7. Inhibition of the EBV DNA Replication

P3HR1 cells were treated with 1.6–6.3 μg/mL of F3 or 1.1–4.2 μg/mL of emodin before lytic induction. After culturing for two days, EBV DNA in P3HR1 cells was isolated. Real-time qPCR was used to determine the amount of EBV DNA purified from the P3HR1 cells. These results showed that F3 and emodin at a concentration of 3.1 μg/mL and 1.1 μg/mL, respectively, decreased significantly EBV DNA replication (Figure 7). The effective concentration of F3 and emodin that inhibited EBV genome copy numbers by 50% (EC50) were 2.52 μg/mL and 1.2 μg/mL, respectively (Figure 7).

P. cuspidatum was collected from the San-Dei-Men area in Pingtung County, Taiwan and verified by Prof. C. S. Kuoh. The specimen was deposited in the herbarium of the National Cheng Kung University, Tainan, Taiwan. Emodin was purchased from Sigma Chemical Co. (St. Louis, MO, USA).

Ten grams of dried powder from the P. cuspidatum root was extracted three times in 100 mL of ethanol by refluxing at 85 °C for 2 h. After each extraction, the ethanol fraction was collected by filtration. The ethanol fractions were partitioned twice with hexane and water (10:10:1). The aqueous fractions were collected, concentrated under reduced pressure, and called PcE(H). Dried PcE(H) (1 g) dissolved in 100 mL distilled water was partitioned with an equal volume of ethyl acetate (EtOAc). The EtOAc fractions were collected, concentrated under reduced pressure, and called PcE(H)E. The PcE(H)E soluble fraction was subjected to semi-preparative HPLC using a HYPERPREP C18 (150 × 10 mm i.d., 8 μm) column (Thermo Fisher, Waltham, MA, USA) and eluted with a mobile phase consisting of (A) water and (B) methanol. Gradient elution was performed as follows: 30%–50% B in 0–15 min, 50%–90% B in 15–35 min, and 95% B in 35–45 min. An ethyl acetate subfraction F3 and a yield of 0.31% were obtained. The resulting residues were finally dissolved in dimethyl sulfoxide (DMSO).

P3HR1 cells were plated on poly-L-lysine-coated overslips and fixed with 4% paraformaldehyde at 4 °C for 15 min, followed by treatment with PBS containing with 0.5% Triton X-100 for 10 min at room temperature. After blocking with 1% BSA in PBS at room temperature for 30 min, monoclonal anti-Rta, anti-Zta, and anti-EA-D antibodies were applied at a dilution of 1:200 and 1:1000, respectively and incubated at room temperature for 1 h. Next, the cells were washed with PBS and incubated with the Alexa Fluor 488-conjugated goat anti-mouse IgG for 1 h. DNA was visualized by staining with 4',6'-diamidio-2-phenylindole (DAPI). Cells were examined under the Axioskop 2 plus fluorescence microscope (Zeiss, Thornwood, NY, USA).

For mRNA analysis, quantitative PCR (qPCR) was performed with the use of SYBR green (Applied Biosystems), for DNA analysis was performed with Taqman probe (5'-6-FAM-GGAGACACATCTGGACCAG-MGBNFQ-3') on an ABI StepOne™ real-time PCR system with StepOne™ software v 2.1. All reactions were run in triplicate. Mean cycle threshold (CT) values were normalized to β-actin, yielding a normalized CT (ΔCT). The ΔΔCT value was calculated by subtracting respective control from the ΔCT, and expression level was then calculated by 2 raised to the power of the respective −ΔΔCT value. Relative mRNA (DNA) level (%) = 2−ΔΔCT (SB and F3 treatment)/2−ΔΔCT (SB treatment) × 100. Primers for mRNA analysis include the following: BRLF1 forward (5'-TCACTACACAAACAGACGCAGCCA-3') and reverse (5'-AATCTCCACACTCCCGGCTGTAA-3'); BZLF1 forward (5'-AGAAGCACCTCAACCTGGAGACAA-3') and reverse (5'-CAGCGATTCTG GCTGTTGTGGTTT-3'); and β-actin forward (5'-CGTCTTCCCCTCCATCG) and reverse (5'-CTCG TTAATGTCACGCAC-3'). Primers for DNA analysis, EBNA1 forward (5'-TACAAGACCTGGAAA GGCC-3') and reverse (5'-TCTTTGAGGTCCACTGCC -3').

Data were analyzed statistically by one-way analysis of variance (ANOVA) followed by Dunnett’s post hoc test using the SAS JMP 8.0 software package. Values are expressed as mean ± SD of three replicates and a p value of <0.05 was regarded as significant.

The results of this study clearly demonstrated that F3 and emodin inhibit the transcription of lytic genes and the lytic cycle of EBV to reduce viral DNA replication. Thus, F3 and emodin could potentially be used for the development of anti-EBV drugs.

This work was supported by research grants NSC100-2320-B-041-004-MY3 from the National Science Council, Taiwan, and CLFHR9909 from Chi Mei Medical Center, Liouying, Taiwan.