The Development of Aromas in Ruminant Meat
Previous Article in Journal

Article
Carvacrol: From Ancient Flavoring to Neuromodulatory Agent
by

:
Oregano and thyme essential oils are used for therapeutic, aromatic and gastronomic purposes due to their richness in active substances, like carvacrol; however, the effects of the latter on the central nervous system have been poorly investigated. The aim of our study was to define the effects of carvacrol on brain neurochemistry and behavioural outcome in rats. Biogenic amine content in the prefrontal cortex and hippocampus after chronic or acute oral carvacrol administration was measured. Animals were assessed by a forced swimming test. Carvacrol, administered for seven consecutive days (12.5 mg/kg p.o.), was able to increase dopamine and serotonin levels in the prefrontal cortex and hippocampus. When single doses were used (150 and 450 mg/kg p.o.), dopamine content was increased in the prefrontal cortex at both dose levels. On the contrary, a significant dopamine reduction in hippocampus of animals treated with 450 mg/kg of carvacrol was found. Acute carvacrol administration only significantly reduced serotonin content in either the prefrontal cortex or in the hippocampus at the highest dose. Moreover, acute carvacrol was ineffective in producing changes in the forced swimming test. Our data suggest that carvacrol is a brain-active molecule that clearly influences neuronal activity through modulation of neurotransmitters. If regularly ingested in low concentrations, it might determine feelings of well-being and could possibly have positive reinforcer effects.
Keywords:
carvacrol; dopamine; serotonin; behavior

Carvacrol [2-Methyl-5-(1-methylethyl) phenol] is the major natural constituent in the essential oil fraction of aromatic plants belonging to the family Lamiaceae, such as oregano and thyme. It is a monoterpenic phenol biosynthesized from γ-terpinene, through p-cymene and containing methyl and isopropyl functions in the para position to each other on a phenol ring [1].
Carvacrol has been approved by the Food and Drug Administration for food use and it is included by the Council of Europe in the list of approved chemical flavorings [2,3]. The biological activities of oregano, actually used in food, spice and pharmaceutical industries, were suggested to parallel the carvacrol content [4]. Drugs and/or essential oils containing carvacrol have been widely used in traditional medicine, and a large number of feed additives based on this molecule are at present commercially available [5]. Moreover, an experimental study of mental attitudes among general practitioners and the general population with respect to the use of pharmaceuticals and natural remedies by healthy people demonstrated that natural remedies were more acceptable to the general public than the use of pharmaceuticals for improving concentration, mood and memory [6]. However, in spite of the widespread use of plant-derived metabolites, such as carvacrol, to improve mood and cognition in healthy individuals, additional data to clarify the mechanism of action are needed.
Several reports indicated that carvacrol exhibits fungicidal [7,8], insecticidal [9] and antimicrobial activities [10]. In vitro studies attributed to carvacrol anticarcinogenic and antitumor activities [11,12], “strong antimutagenic effects” and antioxidant properties [13,14]. A recent study showed that this phytochemical protects liver against ischemia/reperfusion (I/R) injury in rats [15]. Due to its lipophilicity and capacity to readily cross membranes, such as the blood-brain barrier [16], this volatile molecule can accumulate in the brain, interacting with different receptor sites in the central nervous system (CNS) showing centrally active properties [17,18]. However, up to now, few and sporadic studies have been carried out on its in vivo effects on the CNS. Recent findings showed that carvacrol inhibits the Transient Receptor Potential (TRP) Cation channel, subfamily M, member 7 (TRPM7) of the TRP family expressed in both HEK cells and CA3–CA1 hippocampal primary cultured cells. It was demonstrated that TRPM7 is an essential mediator of anoxic neuronal death [19]. Therefore, inhibition of TRPM7 is expected to reduce cell death following ischemia and brain damage. It has been recently shown that carvacrol may play a role to protect against cerebral I/R injury [20]. Moreover, carvacrol exerts a strong acetylcholinesterase (AChE) inhibitory effect due to the molecule hydroxyl group binding to AChE, causing a loss of function of AChE, thus suggesting a possible application in Alzheimer’s disease treatment [21]. In addition, recent experimental data indicated that carvacrol induces anxiolytic-like effect and antidepressant-like properties in tasks for anxiety and depression behaviour in mice [22,23]. It is likely that the bioactivity of this specific compound, having the ability to modulate mood and cognitive processes, involves several neurotransmitter systems in the brain. To this end, in the present study in vivo and ex-vivo investigations were performed in rats to clarify the involvement of neurotransmitter systems that control affective state and emotional responses, in the pharmacological action of carvacrol. In particular, possible alterations induced by low chronic and high acute doses of carvacrol on monoaminergic transmission were investigated in the prefrontal cortex (PFC) and hippocampus (HIPP) of male Wistar rats. These two ranges of treatments were chosen in order to partially mimic carvacrol accumulation after daily consumption, in one case, and to investigate on a possible acute effect in the other one. Moreover, the effects of this compound were analysed in a behavioural test sensitive to antidepressant-like activity.

Oral administration of 12.5 mg/kg of carvacrol for seven consecutive days caused a significant increase in dopamine (DA) tissue content, either in PFC or in the HIPP, with respect to controls (P < 0.05; Figure 1). Moreover, subchronic treatment with carvacrol induced a significant increase in serotonin (5-HT) levels only in the HIPP (P < 0.05; Figure 1). 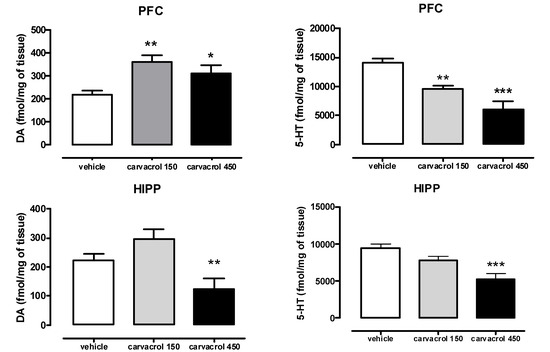 In order to study if neurochemical alterations were accompanied by behavioural outcomes, a forced swimming test (FST) was performed. In this behavioural paradigm, carvacrol was tested only at the higher dose (450 mg/kg p.o.), which was found able to evoke alterations on both neurotransmitters in the two brain areas considered in the study. Carvacrol was ineffective in producing changes in immobility, swimming or climbing activities during the test compared to controls animals (Figure 3).

Adult male Wistar rats (Harlan, S. Pietro al Natisone, UD, Italy) weighing 200–250 g were used. They were housed in standard cages in a controlled temperature room (22 ± 1 °C), and relative humidity (55 ± 5%) under a 12-h light/dark cycle (lights on from 8:00 AM to 8:00 PM). Standard laboratory chow and tap water were available ad libitum. Procedures involving animals and their care were conducted in conformity with the institutional guidelines of the Italian Ministry of Health (D.L. 116/92), the Declaration of Helsinki, the Guide for the Care and Use of Mammals in Neuroscience and Behavioral Research (National Research Council 2004), the Directive 2010/63/EU of the European Parliament and of the Council of 22 September 2010 on the protection of animals used for scientific purposes. All efforts were made to minimise the number of animals used and their suffering. Carvacrol (purity > 98%, Sigma Aldrich s.r.l., Milan, Italy) was dissolved in peanut oil and administered per os, by gavage, at different doses, (12.5 mg/kg for 7 consecutive days; 150 or 450 mg/kg for acute administration), accordingly to literature data and preliminary experience [18,22,23,31]. Control animals received oral administration of peanut oil (vehicle). Carvacrol and vehicle were administered in a volume of 1 mL/kg. Experimental procedures were performed 2h after acute doses; in the subchronic condition experiments were performed 2 h after last administration. Different sets of animals were used for neurochemical analysis (n = 8/group for acute and n = 8/group for subchronic experiments) and behavioural test (n = 10/group) for a total of 60 animals.

Rats were anesthetized intra-peritoneally with 3.6 mL/kg equithesin (composition: 1.2 g sodium pentobarbital; 5.3 g chloral hydrate; 2.7 g MgSO4; 49.5 mL propylene glycol; 12.5 mL ethanol and 58 mL distilled water), then were killed by decapitation and brains were immediately removed. For dissection, the brains were placed dorsal side up in an ice chilled rat brain matrix (World Precision Instruments, Inc. Sarasota, FL, USA) with slits spaced at 1 mm using an ice-chilled razor blade. Target regions were dissected out and weighted, according to the atlas of Paxinos and Watson [50]. Thereafter, PFC and HIPP were collected and immediately frozen on dry ice. Tissues were stored frozen at −80 °C until monoamine neurotransmitter levels quantification. At the time of analysis, samples were homogenized in 10 volumes (w/V) of perchloric acid 0.1 M. The homogenates were stored on ice for 30 min and then centrifuged at 10.000 x g for 10 min at 4 °C. The supernatants were then filtered and diluted before high performance liquid chromatography (HPLC) analysis.
DA and 5-HT concentrations were determined by HPLC coupled with an electrochemical detector (INTRO, Antec Leyden, The Netherlands). Amines separation was performed by a LC18 reversed phase cartridge column (Sphereclone, 150 mm × 2 mm, ODS 3 µm; Phenomenex, Castelmaggiore, Italy). The detection was accomplished by a Unijet cell (BASi, Kenilworth, U.K.) with a 6 mm diameter glassy-carbon electrode at a working potential of 0.65 V vs Ag/AgCl. The mobile phase used was 85 mM CH3COONa, 0.8 mM octanesulfonic acid, 0.3 mM EDTA, 15 mM NaCl, methanol 6%, in distilled water, buffered at pH 4.85. The flow rate was maintained by an isocratic pump (Shimadzu LC-10AD, Kyoto, Japan) at 0.220 mL/min. Data were acquired and integrated using Chromeleon software (version 6.60, Dionex, San Donato Milanese, Italy). Substrate concentration was expressed as fmol per milligram of wet tissue.

The test was performed according to Cryan et al., [51]. Rats were individually forced to swim inside vertical Plexiglas cylinders (diameter 23 cm; height 70 cm) containing 30 cm of water maintained at 25 °C . During a preconditioning period, animals were placed into the cylinders and after 15 min in the water, they were removed and allowed to dry before being returned to their home cages. Twenty-four hours later, each rat was returned to the water-filled cylinder for 5 min and recorded by video camera. During the test sessions, the frequencies (5 min counts) of the following behaviours were measured: climbing (time spent in tentative of escaping), swimming (time spent moving around the cylinder) and immobility (time spent remaining afloat making only the necessary movements to keep its head above the water).

In summary, our data demonstrated that carvacrol possess neuromodulatory properties in specific areas of the brain. Even though the specific mechanism through which carvacrol exerts its action and the functional meaning of the observed effects still remains unclear, our findings stimulate interest into deeply investigating this volatile compound. Since it is widely used not only as feed additive, but also as an essence for cosmetics and as a herbal remedy, further studies are required to establish its potential clinical efficacy as well as potential toxicity, before any recommendations can be made on its use.