Atractylenolide I (ATL-1) is the major sesquiterpenoid of Atractylodes macrocephala. This study was designed to investigate whether ATL-1 induced apoptosis in A549 and HCC827 cells in vitro and in vivo. In our results, ATL-1 significantly decreased the percentage of in vitro viability, in a dose-dependent manner. In addition, DAPI staining and flow cytometry tests demonstrated the induction of apoptosis by ATL-I. Western blot analysis indicated that the protein levels of caspase-3, caspase-9 and Bax were increased in A549 and HCC827 cells after ATL-I exposure; to the contrary, the expressions of Bcl-2, Bcl-XL were decreased after treatment with ATL-1. In the in vivo study, ATL-I effectively suppressed tumor growth (A549) in transplanted tumor nude mice with up-regulation of caspase-3, caspase-9, and Bax and down-regulation of Bcl-2 and Bcl-XL. In conclusion, our results demonstrated that ATL-I has significant antitumor activity in lung carcinoma cells, and the possible mechanism of action may be related to apoptosis induced by ATL-I via a mitochondria-mediated apoptosis pathway. View Full-Text
Keywords: atractylenolide I; Atractylodes macrocephala; antitumor activity; apoptosis; lung cancer atractylenolide I; Atractylodes macrocephala; antitumor activity; apoptosis; lung cancer
►▼ Show Figures 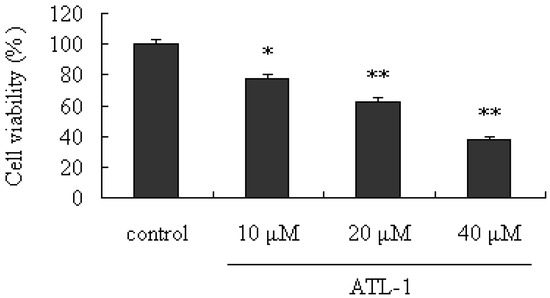