Triptolide (TP) often causes adverse reactions in the gastrointestinal tract when it is administered orally. This study aimed to prepare and optimize triptolide-loaded solid lipid nanoparticles (TP-SLN) with reduced gastric irritation. The microemulsion technique was used to formulate TP-SLN employing a five-level central composite design (CCD) that was developed for exploring the optimum levels of three independent variables on particle size, encapsulation efficiency (EE) and drug loading (DL). Quadratic polynomial models were generated to predict and evaluate the three independent variables with respect to the three responses. The optimized TP-SLN was predicted to comprise fraction of lipid of 49.73%, surfactant to co-surfactant ratio of 3.25, and lipid to drug ratio of 55.27, which showed particle size of 179.8 ± 5.7 nm, EE of 56.5 ± 0.18% and DL of 1.02 ± 0.003% that were in good agreement with predicted values. In addition, the optimized nanoparticles manifested a sustained-release pattern in vitro and were stable during 3 h of incubation in simulated gastric fluids without significant size change and the majority (91%) of the drug was protected. Furthermore, the nanoparticles did not show obvious gastric irritation caused by oral administration of TP in rats. View Full-Text
Keywords: triptolide; solid lipid nanoparticles; microemulsion technique; central composite design; sustained release; gastric irritation triptolide; solid lipid nanoparticles; microemulsion technique; central composite design; sustained release; gastric irritation
►▼ Show Figures 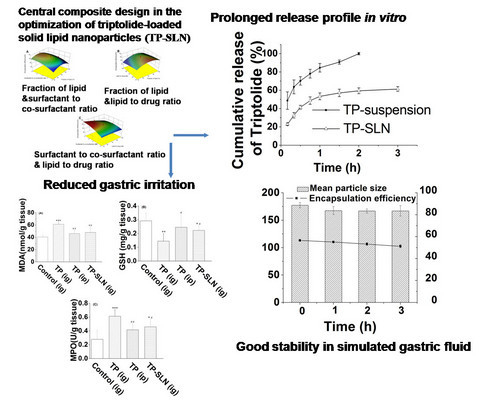