Dermatophytoses are mycoses that affect keratinized tissues in both humans and animals. The aim of this study was to investigate the antifungal activity of the oleoresin extracted from Copaifera langsdorffii Desf. against the strains Microsporum canis ATCC 32903, Microsporum gypseum ATCC 14683, Trichophyton mentagrophytes ATCC 11481 and Trichophyton rubrum CCT 5507. The antimicrobial activity was determined by minimum inhibitory concentration (MIC) and minimum fungicidal concentration (MFC) values. Ketoconazole and terbinafine were used as reference drugs. The copaiba oleoresin showed moderate fungicidal activity against T. mentagrophytes ATCC 11481 (MIC and MFC = 170 μg mL−1) and weak fungicidal activity against T. rubrum CCT 5507 (MIC = 1,360 μg mL−1 and MFC = 2,720 μg mL−1). There was no activity against M. canis ATCC 32903 and M. gypseum ATCC 14683. SEM analysis revealed physical damage and morphological alterations such as compression and hyphae clustering in the structure of the fungi exposed to the action of the oleoresin. The results stimulate the achievement of in vivo assays to confirm the benefits of the application of oleoresin extracted from copaiba in the treatment of dermatophytosis, both in humans and in animals. View Full-Text
Keywords: antifungal agent; Copaifera spp.; dermatophytosis antifungal agent; Copaifera spp.; dermatophytosis
►▼ Show Figures 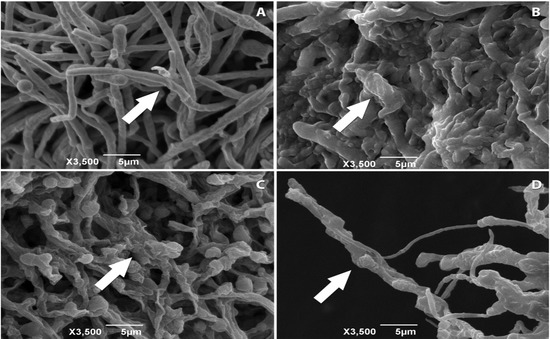