Lepidotrichilins A and B, New Protolimonoids with Cytotoxic Activity from Trichilia Lepidota (Meliaceae)

A rapid resolution liquid chromatography/time-of-flight tandem mass spectrometry (RRLC-TOF/MS) method was developed for qualitative and quantitative analysis of the major chemical constituents in Andrographis paniculata. Fifteen compounds, including flavonoids and diterpenoid lactones, were unambiguously or tentatively identified in 10 min by comparing their retention times and accurate masses with standards or literature data. The characteristic fragmentation patterns of flavonoids and diterpenoid lactones were summarized, and the structures of the unknown compounds were predicted. Andrographolide, dehydroandrographolide and neoandrographolide were further quantified as marker substances. It was found that the calibration curves for all analytes showed good linearity (R2 > 0.9995) within the test ranges. The overall limits of detection (LODs) and limits of quantification (LOQs) were 0.02 μg/mL to 0.06 μg/mL and 0.06 μg/mL to 0.2 μg/mL, respectively. The relative standard deviations (RSDs) for intra- and inter-day precisions were below 3.3% and 4.2%, respectively. The mean recovery rates ranged from 96.7% to 104.5% with the relative standard deviations (RSDs) less than 2.72%. It is concluded that RRLC-TOF/MS is powerful and practical in qualitative and quantitative analysis of complex plant samples due to time savings, sensitivity, precision, accuracy and lowering solvent consumption. View Full-Text
Keywords: Andrographis paniculata; rapid resolution liquid chromatography; time-of-flight tandem mass; diterpenoid lactones Andrographis paniculata; rapid resolution liquid chromatography; time-of-flight tandem mass; diterpenoid lactones
►▼ Show Figures 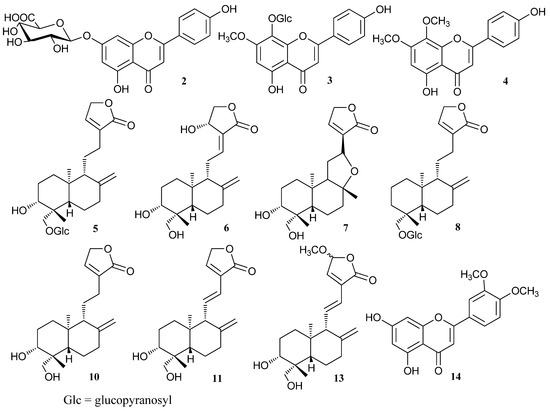