The technology of RNAi has attracted particular attention as the most powerful tool for suppressing gene expression in mammalian cells [1,2]. Fire et al. discovered the phenomenon of RNAi using a long double-stranded RNA (dsRNA), which induced the sequence-specific degradation of homologous mRNAs [3]. In the cytoplasm of mammalian cells, a long dsRNA is cleaved to short dsRNAs by a Dicer enzyme [4,5]. Short dsRNAs of 21 to 23 nucleotides (nt) in length, having a phosphate at the 5′-end and a 2-nt overhang at the 3′-end, are named small interfering RNAs (siRNAs). These siRNAs are bound to a protein complex called an RNA-induced silencing complex (RISC) [6]. The RISC cleaves the target mRNA at a sequence-specific position, guided by the antisense strand of the siRNAs. Because RNAi works in a sequence-specific manner, strong gene suppression requires only a few siRNA molecules.
However, in mammalian cells, a long dsRNA induces an interferon response [7]. To prevent interferon activation, Elbashir et al. have used chemically synthesized 21-nt siRNAs, which consist of a 19-nt duplex in the central region and a 2-nt overhang at the 3′-end [8]. Since 21-nt siRNAs prevented interferon activation and strongly affected gene expression (similar to the effect of long dsRNA), chemically synthesized 21-nt siRNAs are widely used [9,10,11,12,13].
Although RNAi has many advantages over other genetic drug technologies, several problems, such as cellular delivery, stability against nuclease degradation, and side effects (off-target effects and interferon responses at high concentrations), must be solved before it can be applied in the clinic [14,15,16,17,18,19,20]. To solve the problems associated with RNAi, by improving the properties of 21-nt siRNAs, many chemically modified 21-nt siRNAs have been developed [21,22,23,24,25,26,27]. It has been reported that amino-modified 21-nt siRNAs at the 3′-end are highly stable against nuclease degradation [21]. The 2′-modifications (2′-O-Me and 2′-F) of 21-nt siRNAs and sugar modifications [e.g., locked nucleic acid (LNA)] also demonstrate high nuclease stability [22,23,24]. Modification with unlocked nucleic acids (UNA), which is an acyclic nucleotide splitting the 2′-3′-bound, either at an overhang or at a specific position of the siRNAs, showed enhanced potency of RNAi with high stability and reduced off-target effects [25]. The modifications of a phosphate backbone (e.g., phosphorothioate and boranophosphate) result in high nuclease stability and strong gene suppression [26,27]. Direct conjugation with functional molecules, including polymers [28,29], peptides [30,31,32,33], and lipids [34,35,36,37,38], to 21-nt siRNAs has been reported to improve the biological properties of siRNAs in vitro and in vivo. Polyethylene glycols (PEGs)-siRNA conjugate showed much greater enhancement of stability against nuclease than nonmodified siRNAs [29]. To facilitate membrane permeability, cell-penetrating peptides (CPPs), such as TAT trans-activator protein from human immunodeficiency virus type-1 (HIV-1) and Penetratin from the homeodomain protein of Antennapaedia, were covalently conjugated to siRNAs using a heterobifunctional cross-linker [30,31]. Covalent conjugation of cholesterol, bile acids, and long-chain fatty acids to siRNAs at the 3′-end of the sense strand were also synthesized and mediated siRNA uptake in cell in vitro and in vivo [34,35,36,37,38]. These lipophilic siRNAs interacted with lipoprotein particles, lipoprotein receptors, and transmembrane proteins, and influenced uptake behaviors of the siRNAs. These conjugated siRNAs exhibited RNAi activity without any transfection reagent, but only at high (micromolar) concentrations. Although the modifications and conjugations of 21-nt siRNAs, as described above, could solve some of the problems of RNAi, such as nuclease stability or cell permeability, most of them weaken the gene-silencing efficacy.
On the other hand, it was recently found that blunt-ended 27-nt siRNAs have a much stronger gene silencing effect than 21-nt siRNAs [39,40]. The 27-nt siRNAs are cleaved by a Dicer enzyme, leading to the release of 21-nt siRNAs, and thus are incorporated into the RISC. We previously reported that the 27-nt siRNAs modified with amine at the 5′-end of the sense strand exhibited much better RNAi potency compared with the nonmodified 27-nt siRNAs [41,42,43].
In the present study, we synthesized 27-nt siRNA conjugated with nuclear export signal (NES) peptide, which used the human immunodeficiency virus type-1 (HIV-1) Rev sequence that consist of short amino acid sequences rich in leucine and the other aliphatic amino acids [44], at the 5′-end of the sense strand, and investigated its biological properties, such as prossecing by Dicer enzyme, cell membrane permeability, and RNAi efficacy.

Amino-modified 21-nt and 27-nt single-stranded RNAs (ssRNAs) at the 5′-end corresponding to the sense-strand of the target site of Renilla luciferase gene were conjugated with HIV-1 Rev NES peptide via an N-(6-maleimidocaproyloxy)succinimide (EMCS) linker (Scheme 1). Conjugates were purified by RP-HPLC, and the molecular masses were identified by MALDI-TOF mass spectrometry (Table 1). The peptide-conjugated 21-nt and 27-nt ssRNAs were obtained in 33.0% and 22.9% overall yields, respectively, after HPLC purification (Table 1), and were annealed with their antisense strands of 21-nt and 27-nt ssRNAs, respectively (Figure 1B). The 21-nt and 27-nt peptide-conjugated siRNAs (Peptide-siRNAs) were analyzed by 20% polyacrylamide gel electrophoresis (PAGE), and each corresponding band showed a different mobility in comparison with that of nonmodified 21-nt and 27-nt siRNAs (Figure 1C). These Peptide-siRNAs were clearly separable, and their purity for further use was confirmed.

Table 1. Characterizations of ssRNAs conjugated with peptide.
a A linear gradient condition of acetonitrile shifting the concentrations from 7% to 70% during 40 min in 20 mM triethylammoniumacetate (pH 7.0) using an ODS column; b A saturated solution of 2,4,6-trihydroxyacetophenone in 50 mg/mL diammonium hydrogen citrate in 50% acetonitrile was used as a matrix; c Overall yields of the products were determined by measuring absorbance at 260 nm after RP-HPLC purification; d The purified ssRNAs were purchased. 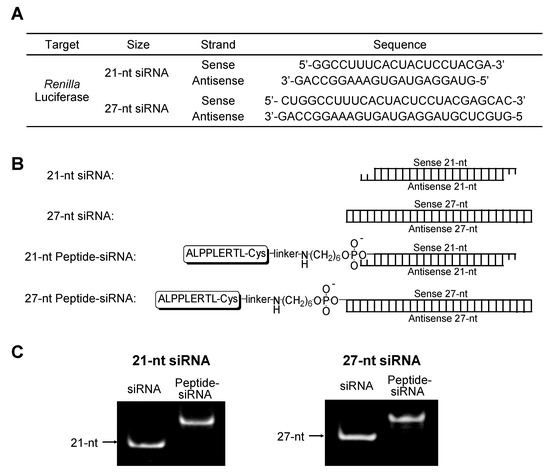 2.1.2. Processing of Peptide-siRNAs by Dicer 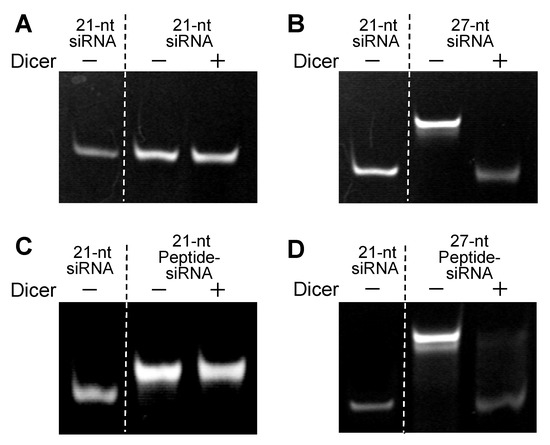 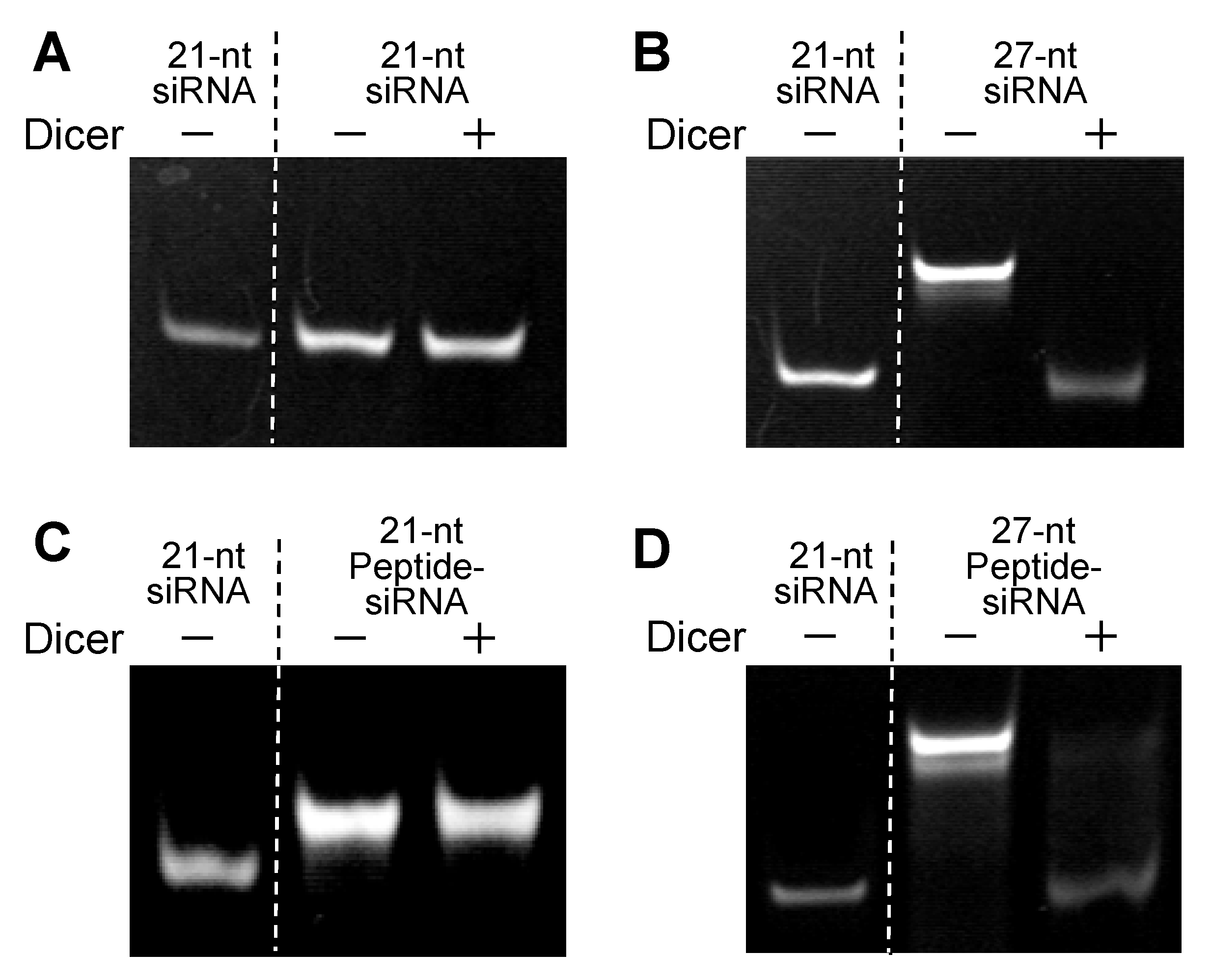 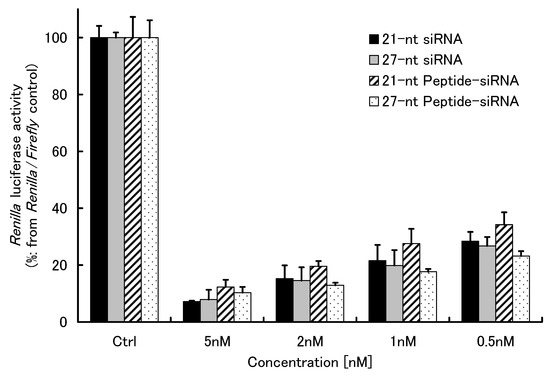 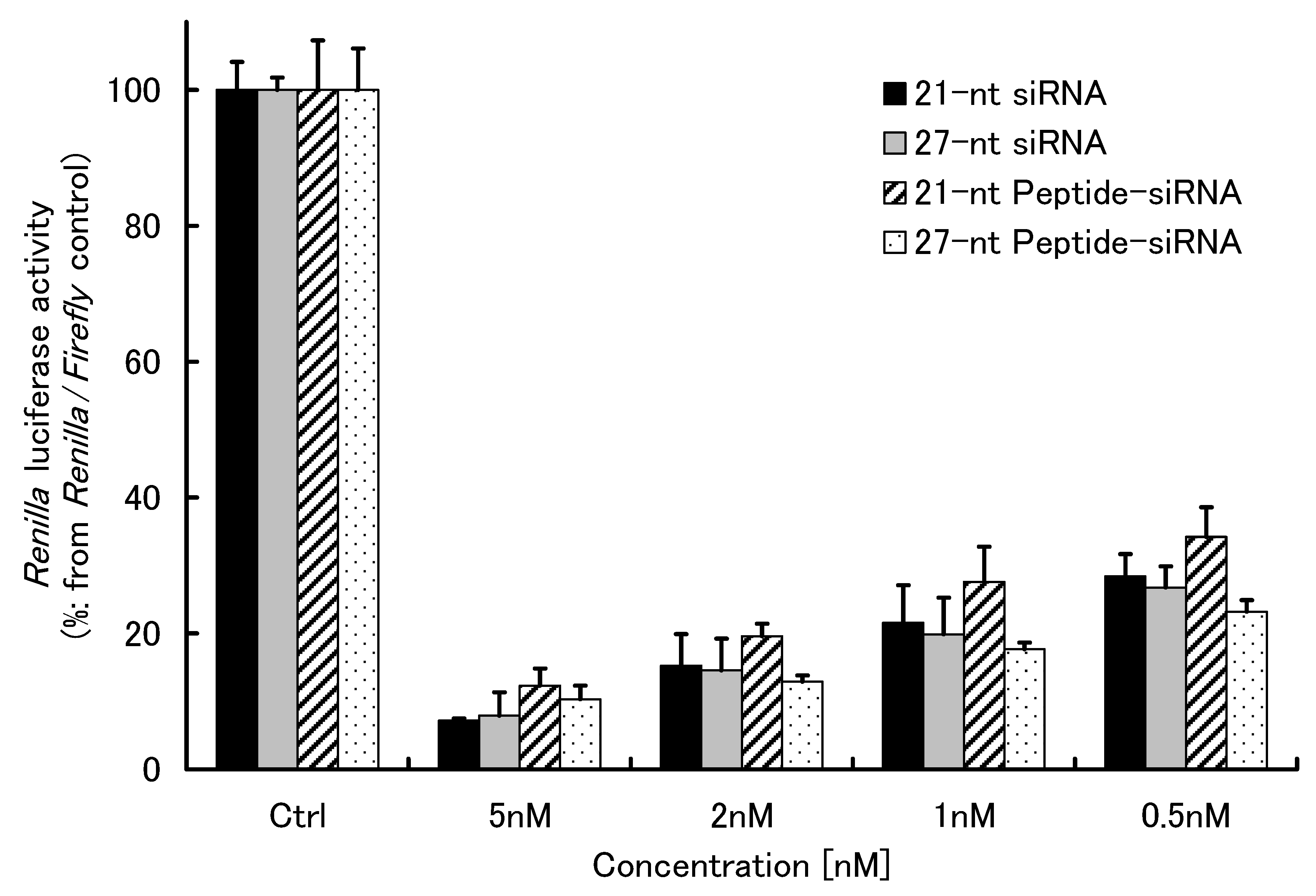 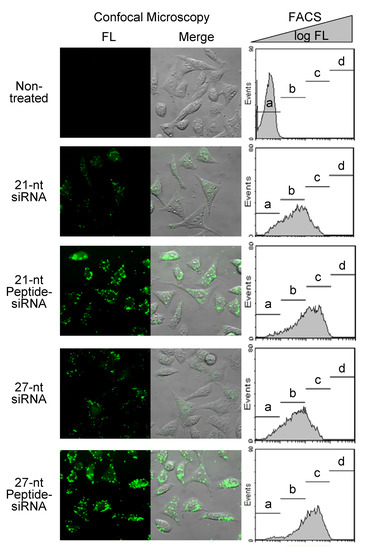 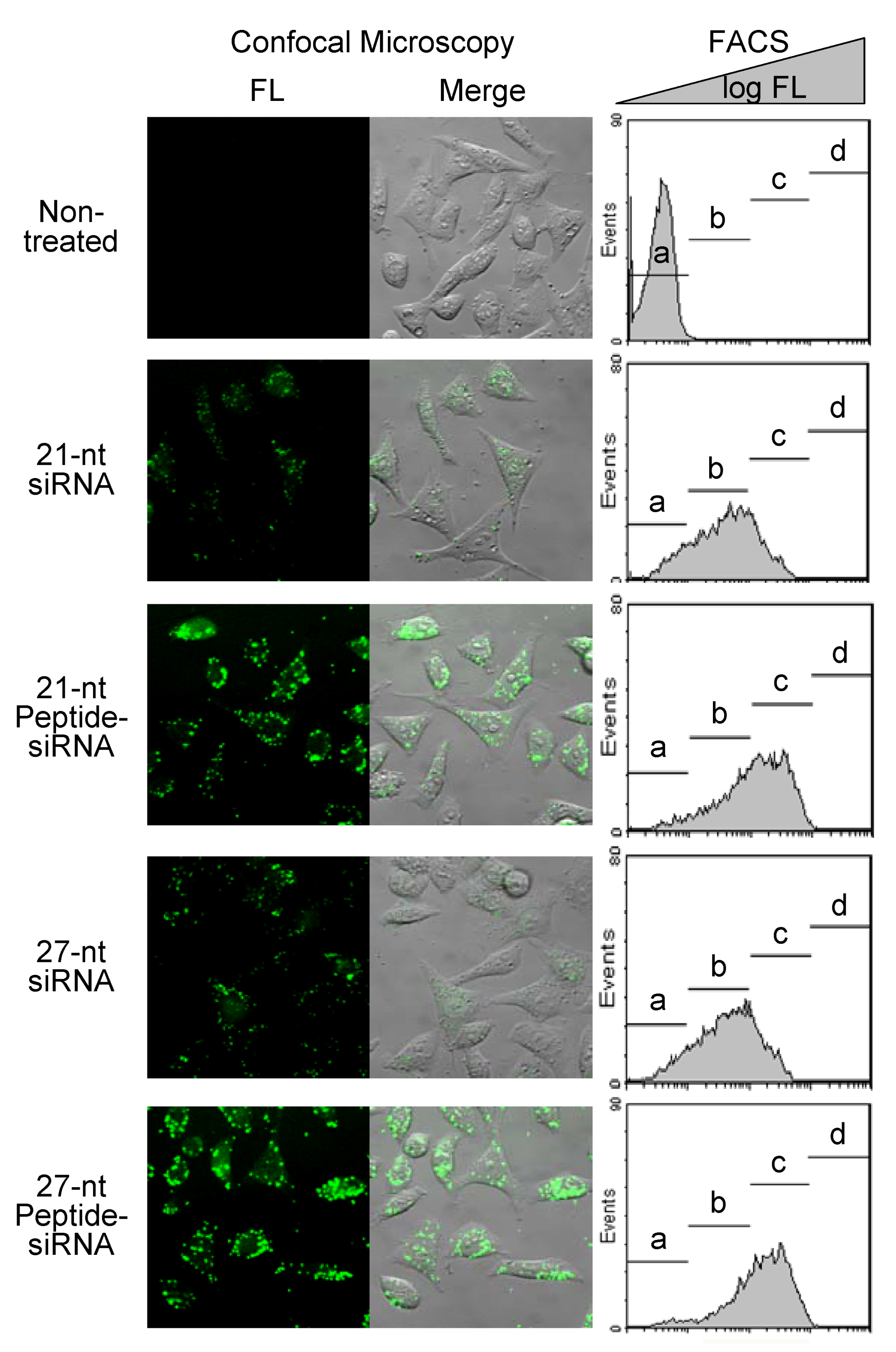 The sequences of siRNAs were designed to target the synthetic Renilla luciferase gene (Figure 1A). ssRNAs (21-nt and 27-nt), including 5′-amino-modified ssRNAs, were purchased from Integrated DNA Technologies (Coralville, IA, USA). The amino-modified ssRNAs (sense strand; 4 nmol) were reacted with 200 nmol EMCS linker (Dojindo, Kumamoto, Japan) in N,N-dimethylformamide (DMF)/ water mixtures for 2 h at room temperature. The ssRNAs coupled with the EMCS linker were purified using a Poly-Pak cartridge (Glen Research, Sterling, VA, USA) to remove any excess linker, and were used for peptide conjugation. The peptide in the present study was the NES peptide of HIV-1 Rev with a cysteine residue at the C-terminal (ALPPLERLTL-Cys). The coupling reaction of the peptide (40 nmol) and the EMCS-linked ssRNAs (4 nmol) mentioned above were carried out in 20 mM triethylammoniumacetate (TEAA) (pH 8.0) for 12 h at room temperature (Scheme 1). The peptide-ssRNA conjugates were purified by RP-HPLC. The molecular weights of the peptide-conjugated ssRNAs were confirmed by MALDI-TOF mass spectrometry (Ultraflex; Bruker Daltonics, Bremen, Germany) as predicted. The yield of the conjugates was spectrophotometrically calculated on the basis of absorbance at a 260 nm wavelength (V-670 spectrophotometer; JASCO, Tokyo, Japan). Antisense ssRNAs (21-nt and 27-nt) for the Renilla luciferase gene were prepared in order to generate Peptide-siRNAs in conjunction with the sense strands of the peptide-conjugated ssRNAs mentioned above.

3.2. In Vitro Cleavage of Peptide-siRNAs by Recombinant Dicer

All of the siRNAs (20 pmols each) including the peptide conjugates were mixed with 1 U of recombinant Dicer (Gene Therapy Systems, San Diego, CA, USA) in 10 μL of 20 mM Tris-HCl (pH 8.0) containing 15 mM NaCl and 2.5 mM MgCl2. The mixtures were incubated at 37 °C for 12 h, and the reaction was stopped by adding 2 μL of stop solution (Gene Therapy Systems). The reaction products were electrophoresed on 20% PAGE (30 mA, 70 min) and visualized by silver staining (DNA Silver Stain Kit; GE Healthcare, Piscataway, NJ, USA). The signals of the reacted products were photographed by the LAS4000 imaging system (Fujifilm, Tokyo, Japan).

The HeLa cells were adjusted to 1 × 105 cells/mL in 100 μL medium in each well of 96-well multiplates and were cultured. Twelve hours later, 0.02 μg of psiCHECK-2 vector (Promega, Madison, WI, USA) was first incubated with 0.2 μL of LF2000 (Invitrogen) in 10 μL of Opti-MEM (Invitrogen) for 30 min according to the manufacturer’s protocol, and then 10 μL of the mixture was added to each well containing the cells in 90 μL fresh culture medium without antibiotics. To investigate RNAi, the Peptide-siRNAs at different concentrations (0.5, 1, 2 and 5 nM) were pre-incubated with LF2000. Four hours after transfection of the vectors, 10 μL of the pre-incubated mixture of Peptide-siRNAs and LF2000 was added to each well containing 90 μL fresh culture medium. After an another 8 h incubation, the culture medium was replaced with 100 μL fresh medium, and the cells were cultured for 48 h for assessment of RNAi. Renilla and Firefly luciferase gene expressions in the cells were measured by the Dual-Glo Luciferase Assay System (Promega).

To prepare FAM-labeled 21-nt and 27-nt siRNAs including peptide conjugates, antisense 21-nt and 27-nt ssRNAs were labeled with 5′-fluorescein phosphoramidite at the 5′-end. The FAM-labeled antisense 21-nt and 27-nt ssRNAs were annealed with peptide-conjugated and nonmodified sense 21-nt and 27-nt ssRNAs, respectively, in annealing buffer.
To deliver the prepared siRNAs intracellularly to the HeLa cells, 200 pmol of each 21-nt or 27-nt siRNAs, including Peptide-siRNAs, labeled with FAM was incubated with 2 μL LF2000 in 100 μL Opti-MEM diluted twice for 30 min at room temperature. Then, 100 μL of each sample was added to 900 μL culture medium of HeLa cells (5 × 104 cells) and incubated for 6 h in the dark under a humidified atmosphere (5% CO2, 37 °C). The HeLa cells were washed several times with fresh medium, and the intracellularly incorporated quantity of siRNAs, including Peptide-siRNAs, labeled with FAM in HeLa cells was examined under a fluorescent confocal microscope (IX70; Olympus, Tokyo, Japan).
Another approach was used to investigate the intracellular delivery of 21-nt and 27-nt siRNAs, including Peptide-siRNAs, labeled with FAM by flow cytometry (FACSAria; BD Biosciences, Franklin Lakes, NJ, USA). The forward- and side-scatter parameters were adjusted to accommodate the inclusion of each of the dissociated cell lines with the aid of FAM as a marker. Five-thousand cells were analyzed and no cells were excluded from the analysis. Data were collected and analyzed using FACSDiva software (BD Bioscience).

This research was supported in part by The Science Research Promotion Fund from The Promotion and Mutual Aid Corporation for Private Schools of Japan.