Semiconducting thin films were grown on quartz substrates and crystalline silicon wafers, using dilithium phthalocyanine and the organic ligands 2,6-dihydroxyanthraquinone and 2,6-diaminoanthraquinone as the starting compounds. The films, thus obtained, were characterized by Fourier Transform infrared (FTIR), fast atomic bombardment (FAB+) mass and ultraviolet-visible (UV-Vis) spectroscopies. The surface morphology of these films was analyzed by means of atomic force microscopy (AFM) and scanning electron microscopy (SEM). It was found that the temperature-dependent electric current in all cases showed a semiconductor behavior with conductivities on the order of 10−6·S cm−1, whereas the highest value corresponded to the thin film based upon the bidentate amine. The Tauc and Cody optical band gap values of thin films were calculated from the absorption coefficients and were found to be around 1.5 eV, with another strong band between 2.3 and 2.43 eV, arising from non-direct transitions. The curvature in the Tauc plot influencing the determination of the optical gap, the Tauc optical gap corresponding to the thicker film is smaller. The dependence of the Cody optical gap on the film thickness was negligible. View Full-Text
Keywords: thin films; organic semiconductors; optical properties thin films; organic semiconductors; optical properties
►▼ Show Figures 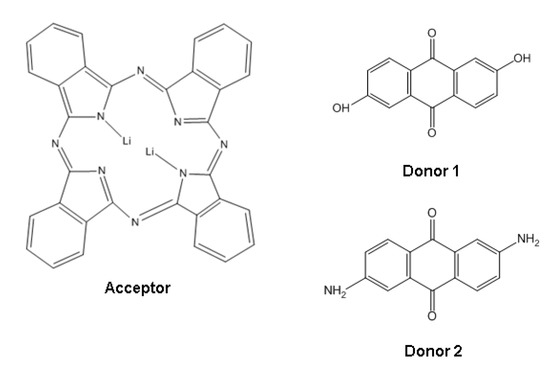