Radix Glycyrrhizae polysaccharide (GP), the most important component of Radix Glycyrrhizae, has been reported to have many immunopharmacological activities. However, the mechanism by which GP affects dendritic cells (DCs) has not been elucidated. In this study, we investigated the effect of GP on murine bone marrow-derived DCs and the potential pathway through which GP exerts this effect. Mononuclear cells (MNCs) were isolated from murine bone marrow and induced to become DCs by culturing with GM-CSF and IL-4. Six days later, DCs were divided into three groups: control group, GP group and LPS group. After 48 h of treatment, phenotypic figures and antigen uptake ability were determined by FACS analysis. The proliferation of DC-stimulated allogenic CD3+ T cells was detected by WST-1. IL-12 p70 and IFN-γ, which are secreted by DCs and CD3+ T cells respectively, were quantified by ELISA. Additionally, IL-12 p40 mRNA expression was determined by real-time PCR. Alterations in TLR4-related signaling pathways were examined by performing an antibody neutralization experiment. Treatment of DCs with GP resulted in the enhanced expression of the cell surface molecules CD80, CD86 and MHC I-A/I-E. GP also increased the production of IL-12 p70 by DCs in a time-dependent manner. The endocytosis of FITC-dextran by DCs was suppressed by GP administration. Furthermore, GP-treated DCs enhanced both the proliferation and IFN-γ secretion of allogenic CD3+ T cells. Finally, the effects of GP on DCs were partially reduced by using inhibitors of TLR4, NF-κB, p38 MAPK or JNK. In conclusion, GP can induce the maturation of DCs, and does so, in part, by regulating a TLR4-related signaling pathway. View Full-Text
Keywords: Radix Glycyrrhizae polysaccharide; dendritic cells; maturation; immune regulation Radix Glycyrrhizae polysaccharide; dendritic cells; maturation; immune regulation
►▼ Show Figures 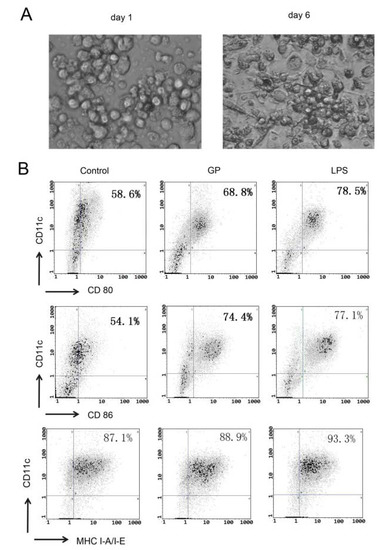