Despite the progress in colon cancer treatment, relapse is still a major obstacle. Hence, new drugs or drug combinations are required in the battle against colon cancer. α-Mangostin and betulinic acid (BA) are cytotoxic compounds that work by inducing the mitochondrial apoptosis pathway, and cisplatin is one of the most potent broad spectrum anti-tumor agents. This study aims to investigate the enhancement of BA cytotoxicity by α-mangostin, and the cytoprotection effect of α-mangostin and BA on cisplatin-induced cytotoxicity on HCT 116 human colorectal carcinoma cells. Cytotoxicity was investigated by the XTT cell proliferation test, and the apoptotic effects were investigated on early and late markers including caspases-3/7, mitochondrial membrane potential, cytoplasmic shrinkage, and chromatin condensation. The effect of α-mangostin on four signalling pathways was also investigated by the luciferase assay. α-Mangostin and BA were more cytotoxic to the colon cancer cells than to the normal colonic cells, and both compounds showed a cytoprotective effect against cisplatin-induced cytotoxicity. On the other hand, α-mangostin enhanced the cytotoxic and apoptotic effects of BA. Combination therapy hits multiple targets, which may improve the overall response to the treatment, and may reduce the likelihood of developing drug resistance by the tumor cells. Therefore, α-mangostin and BA may provide a novel combination for the treatment of colorectal carcinoma. The cytoprotective effect of the compounds against cisplatin-induced cytotoxicity may find applications as chemopreventive agents against carcinogens, irradiation and oxidative stress, or to neutralize cisplatin side effects. View Full-Text
Keywords: α-mangostin; betulinic acid; cisplatin; apoptosis; cytotoxicity enhancement; cytoprotection effects α-mangostin; betulinic acid; cisplatin; apoptosis; cytotoxicity enhancement; cytoprotection effects
►▼ Show Figures 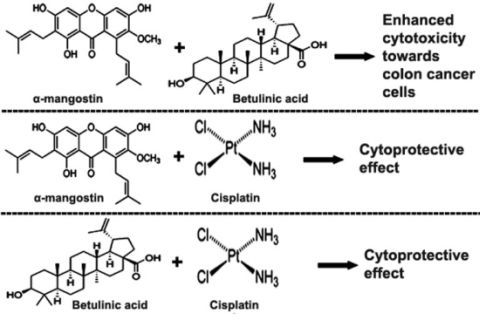