Breast cancer is one of the most commonly diagnosed types of cancer in women. In the United States, breast cancer is the second leading cause of death from cancer in women. About two-thirds premenopausal and three-quarters of postmenopausal breast cancer patients have estrogen-dependent cancer, which means estrogens play a critical role in stimulating breast cancer cell proliferation [1]. Therefore, antagonizing the action of estrogen can depress the development of breast cancer. According to the previous studies, there are two main approaches to control the pathological activity of estrogens [2]. The first is targeting the estrogen receptor directly, which results in the discovery of estrogen receptor antagonists tamoxifen and raloxifene [3,4]. The second is inhibiting aromatase (also called CYP19), a key enzyme that belongs to one of the subfamilies of cytochrome P450s and catalyzes the conversion of androgens to estrogens by altering the steroid enone A-ring to aromatic phenolic ring (Figure 1) [5]. From this point of view, aromatase is a seemly molecular target in the treatment of estrogen receptor sensitive breast cancer. Many aromatase inhibitors (AIs) were developed for the treatment of breast cancer, such as aminoglutethimide (AG), the first AI used in clinic and was ultimately withdrew due to its high toxicity and low selectivity [6]. Other effective AIs were formestane, exemestane, anastrozole and letrozole, which are remarkably potent and sufficiently selective drugs. AIs can be both steroidal and non-steroidal compounds [7].
The rhizomes of Atractylodes macrocephala Koidz (“Baizhu” in Chinese) is one of the most popular Traditional Chinese Medicines (TCMs), which has a long history of use for the treatment of splenic asthenia, anorexia, oedema, excessive perspiration and abnormal fetal movement. Previous chemical investigations on the rhizomes of A. macrocephala demonstrated that the main active constituents in them were sesquiterpenes and acetylenic compounds [8,9,10], which have been proven to possess anti-tumor and anti-inflammatory activities [11,12]. In the present study, ten compounds were isolated from the dichloromethane extract of A. macrocephala, which presented potent aromatase inhibiting activities. 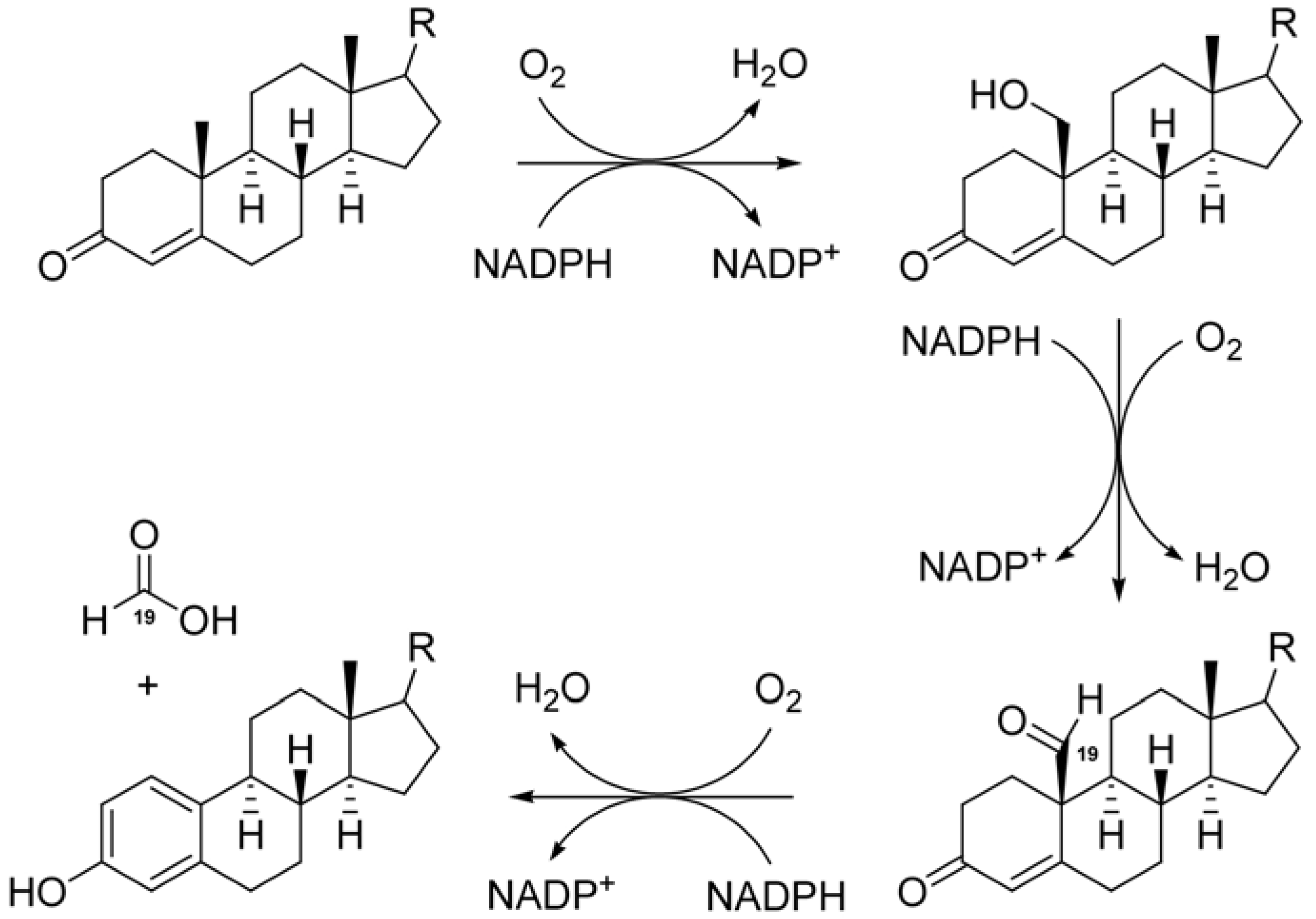 The dichloromethane extract of A. macrocephala yielded ten known compounds (Figure 2): atractylenolide I (1), atractylenolide II (2), atractylenolide III (3), biatractylenolide (4), taraxeryl acetate (5), β-sitosterol (6), stigmasterol (7), juniper camphor (8), atractyloside A (9) and eudesm-4(15),7-diene-9α,11-diol (10). Their structures were elucidated on the basis of the results of NMR, MS and IR spectroscopic analysis and compared with the precious references [11,12,13,14].

The rhizomes of A. macrocephala were purchased from the traditional Chinese medicine market at Hangzhou City, Zhejiang Province, P.R. China, in June 2008 and identified by the authors. A voucher specimen (No. AM080603) was deposited in the herbarium of Department of Pharmacy, Zhejiang Medical College.

Aromatase inhibition was evaluated by measuring the fluorescent intensity of fluorescein, the hydrolysis product of dibenzylfluorescein (DBF), by aromatase as described previously [15]. Compounds 1-10 and the dichloromethane extract of A. macrocephala were tested for their aromatase inhibiting activities. Briefly, the test sample (10 μL) was preincubated with a NADPH regenerating system (2.6 mM NADP+, 7.6 mM glucose-6-phosphate, 0.8 U/mL glucose-6-phosphate dehydrogenase, 13.9 mM MgCl2, and 1 mg/mL albumin in 90 μL of 50 mM potassium phosphate, pH 7.4) for 10 min at 37 °C. The final concentration of extract and each compound were 100 μg/mL and 10 μM, respectively. Then the enzyme and substrate mixture (0.8 μL DBF, 40 pmol/mL of aromatase, and 4 mg/mL albumin in 100 μL of 50 mM potassium phosphate, pH 7.4) were added to incubate for an additional 30 min at 37 °C. Finally, the fluorescence of reaction solvent was measured using infinite F200 scanning fluorescence plate reader (Tecan, Mannedorf, Switzerland) with excitation at 485 nm and emission at 535 nm. Chrysin was tested as positive control. Experiments were carried out three times on separate occasions.

© 2011 by the authors; licensee MDPI, Basel, Switzerland. This article is an open access article distributed under the terms and conditions of the Creative Commons Attribution license ( http://creativecommons.org/licenses/by/3.0/).