Cissampelos capensis, commonly known by the Afrikaans name “dawidjies” or “dawidjieswortel”, is the most important and best known medicinal plant of the family Menispermaceae used by the Khoisan and other rural people in the western region of South Africa. The main alkaloids in the leaves, stems and rhizomes were isolated and identified. Several of the main compounds were previously found in species of the related genus Antizoma and this similarity indicates that the two genera are closely related if not congeneric. Bulbocapnine (an aporphine alkaloid), dicentrine (an aporphine alkaloid) and salutaridine (a morphinane alkaloid) were the main alkaloids in the leaves, while bulbocapnine, cissacapine, cycleanine and insularine (the last three are bisbenzyltetrahydro-isoquinoline alkaloids) are the major compounds in the stems. The rhizome contains mostly bisbenzyltetrahydroisoquinoline alkaloids, with 12-O-methylcurine, cissacapine and cycleanine as the main ones. Alkaloids appear to be quite variable within different plant parts and different provenances, as confirmed by the difference in alkaloid patterns between coastal and inland forms of Cissampelos capensis (the morphinane alkaloid salutaridine, for example, is the major leaf alkaloid along the coast but is practically absent from the inland form of the species). The variety of alkaloids identified may contribute to the medicinal value of this species. The data on alkaloidal variation in the species has potential value and practical applications in chemotaxonomy, toxicology and pharmacognosy. View Full-Text
Keywords: Menispermaceae; Cissampelos capensis; major alkaloids; medicinal uses; southern Africa Menispermaceae; Cissampelos capensis; major alkaloids; medicinal uses; southern Africa
►▼ Show Figures 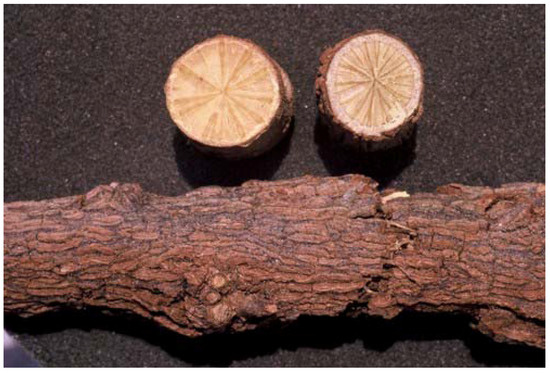