Neurogenesis is a complex process, which contributes to the ability of the adult brain to function normally and adapt to diseases. Epidermal growth factor (EGF) is known to play an important role in neurogenesis; however, the underlying mechanism is still unclear. Here, we hypothesized that brain-derived neurotrophic factor (BDNF) can enhance the effect of EGF on neurogenesis. Using in vitro cell culture of aborted human fetal brain tissues, we investigated proliferation and migration of neural stem/progenitor cells (NSPCs) after treatment with EGF and different concentrations of BDNF. EGF stimulated proliferation and migration of NSPCs, and this effect was significantly enhanced by co-incubation with BDNF. In the NSPCs treated with 50 ng/mL BDNF, BrdU incorporation was significantly increased (from 7.91% to 17.07%), as compared with that in the control. Moreover, the number of migrating cells was at least 2-fold higher than that in the control. Furthermore, phosphorylation of Akt-1 was increased by BDNF treatment, as well. By contrast, the enhancing effect of BDNF on EGF-induced proliferation and migration of NSPCs were abolished by an inhibitor of PI3K, LY294002. These findings suggest that BDNF promotes EGF-induced proliferation and migration of NSPC through the PI3K/Akt pathway, providing significant insights into not only the mechanism underlying EGF-induced neurogenesis but also potential neuronal replacement strategies to treat brain damage. View Full-Text
Keywords: neural stem/progenitor cells; epidermal growth factor; brain-derived neurotrophic factor; proliferation; migration neural stem/progenitor cells; epidermal growth factor; brain-derived neurotrophic factor; proliferation; migration
►▼ Show Figures 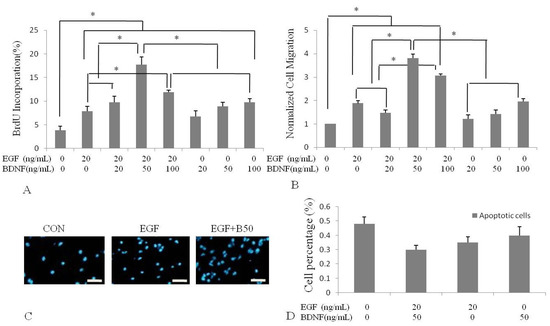