Clitoria ternatea L. (CT) (Family: Fabaceae) is an ornamental perennial climber, up to 2–3 m in height, bearing conspicuous blue or white flowers resembling a conch shell and found growing in the wild and also in cultivated gardens [1]. The leaves and roots are used in the treatment of a number of ailments including body aches, infections, urinogenital disorders, and as an anthelmentic and antidote to animal stings [2]. The young shoots, leaves, flowers and tender pods are eaten as a vegetable in Kerala (India) and in the Philippines. In Malaysia, the leaves are employed to impart a green color to food and the flowers to impart a bright blue color to rice cakes [1]. Furthermore, the leaves are useful in otalgia and hepatopathy, whereas seeds are cathartic Anonymous, 1995 Anonymous, Indian medicinal plants, vol. 2 Orient Longman, Madras (1995), pp. 129–132. [3]. Moreover, the root, stem and flower are recommended for the treatment of snakebites and scorpion stings in India [4]. Various pharmacological activities of C. ternatea were reported in literature such as antimicrobial, antipyretic, anti-inflammatory, analgesic, diuretic, local anaesthetic, antidiabetic, insecticidal, blood platelet aggregation inhibiting and vascular smooth muscle relaxant properties [1]. C. ternatea is commonly used in Ayurvedic medicine to treat various types of ailments including as memory enhancer, nootropic, antistress, anxiolytic, antidepressant, anticonvulsant, tranquilizing and sedative agent [1]. Various secondary metabolites such as polyphenolic flavonoids, anthocyanin glycosides, pentacyclic triterpenoids and phytosterols have been reported from this plant. Flavonols i.e., kaempherols, quercetin and myricetin and their glycosides were also isolated from this plant [5]. Since various antioxidant compounds were isolated from this plant, C. ternatea has good potential for development as an antioxidant and hepatoprotective agent.
Despite remarkable advances in modern medicine, hepatic disease remains a worldwide health problem, thus the search for new medicines is still ongoing. Hepatic cells participate in a variety of metabolic activities, therefore the development of liver protective agents is of paramount importance in the protection from liver damage. The literature has constantly shown that hepatoprotective effects are associated with plant extracts rich in antioxidants [6,7,8,9,10]. Many compounds and extracts from plants have thus been evaluated for hepatoprotective and antioxidant effects against chemically-induced liver damage [11,12,13]. Moreover, research on hepatoprotective medicinal plants as a major indicator of the general screening systems can trigger the safety evaluation in the early phase of drug discovery because most of the toxic compounds are metabolized in liver [14,15,16,17,18]. To the best of our knowledge, the hepatoprotective effect of C. ternatea leaves against paracetamol-induced liver injury in mice has not been demonstrated. Hence, the present study focused on evaluating the potential hepatoprotective effect of methanolic extract from C. ternatea leaves on paracetamol-induced liver injury in mice.

The antioxidant potential of methanolic C. ternatea leave extract was investigated in this with the aim of identifying potentially new antioxidant bioactive medicinal plant extracts. The measured DPPH radical scavenging activity is summarized in Figure 1. The percentages of free radical scavenging activities were 67.85%, 43.30% and 68.10% for the C. ternatea extract, vitamin E and BHT, respectively. The IC50 value, which is the concentration of crude extract that decreases the initial DPPH radical concentration by 50%, was 420.00 µg/mL. As mentioned above, flavonols their glycosides have been isolated from C. ternatea [5], and these flavonols may be responsible for the good antioxidant activity observed in this study. 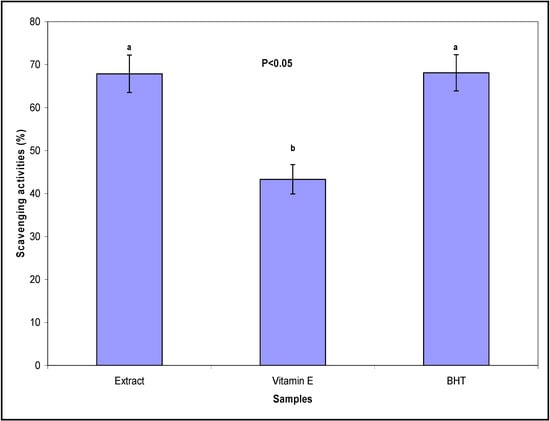 The effects of C. ternatea extract on liver marker enzymes and serum bilirubin content are given in Table 1. The data showed that the control group demonstrated a normal range of AST, ALT and billirubin levels, while the paracetamol-treated group showed elevated levels of AST, ALT and bilirubin, confirming that paracetamol caused liver injury at higher doses. The elevation of cytoplasmic AST and ALT is considered an indicator for the release of enzymes from disrupted cells. Bilirubin concentration has been used to evaluate chemically induced hepatic injury. Besides its various normal functions, the liver excretes the breakdown product of hemoglobin, namely bilirubin, into bile. It is well known that necrotizing agents like paracetamol produce sufficient injury to the hepatic parenchyma to cause large increases in bilirubin content [20]. On the other hand, the extract-treated group showed a very interesting result. Based on the Table 1 data, the biochemical parameters of the extract treated group were higher than those of the control group (p < 0.05), but it showed much lower levels of AST, ALT and billirubin than the paracetamol-treated group, that is, the extract treatment significantly reduced the previously raised levels of AST, ALT and billirubin in hepatotoxic mice. The decrease in the serum levels of these enzymes might be due to the presence of various phenolic and flavonoid compounds in the leaf extract that enhanced the liver’s regeneration ability. One way Analysis of Variance (ANOVA) was done, where p is less than 0.05 and n = 6 to prove the significance of the obtained results.

The results of light microscopy examination of the transverse section of control, paracetamol-treated and extract-treated mice livers are shown in Figure 2,Figure 3,Figure 4. Figure 2 shows the liver cells of mice in the control group. From that image it can be observed that the liver cells are normal in shape, the cell nuclei are intact and most importantly, the portal vein has a regular shape. Overall, a healthy set of cells can be observed. Figure 3 shows the liver of paracetamol intoxicated mice showing wide necrosis across the cells. The liver sections of these mice showed necrosis, ballooning and degeneration in hepatic plates and loss of cellular boundaries. There was also a heavy accumulation of neutrophils surrounding the portal vein. These neutrophils act as an indicator of the occurrence of cell damage as they are absent in normal healthy tissues. The hepatocytes are disrupted and sinusoids are damaged as well. Figure 4 shows the histological architecture of treated liver sections with a mild degree of degeneration and necrosis. The hepatocytes nucleases are at a recovery stage and there are very minimal numbers of neutrophils surrounding the portal vein. Therapy with C. ternatea extract was effective in restoring the paracetamol induced histopathological lesions and almost normal liver architecture was exhibited, with well-formed hepatocytes separated by sinusoids and maintained cord arrangement. The histopathological examination thus verified the hepatoprotective effect of C. ternatea extract against the model hepatotoxicant paracetamol. 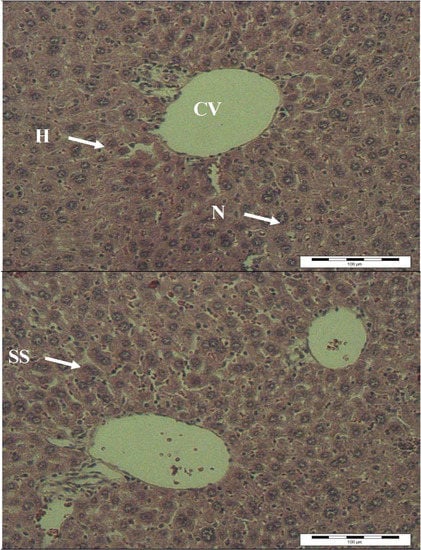 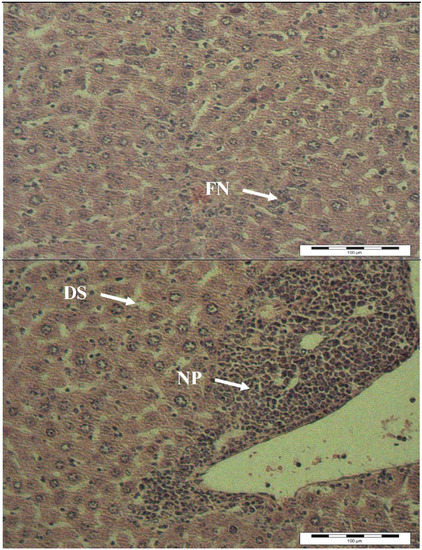 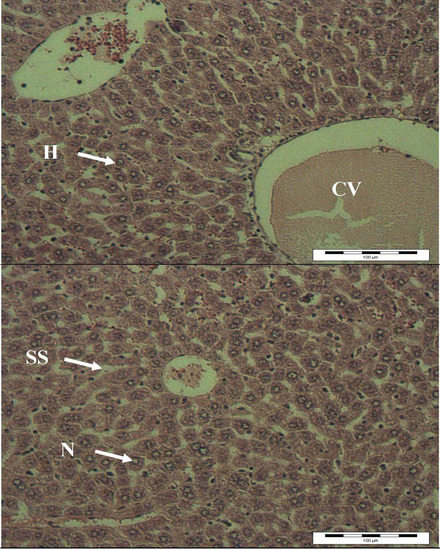 Fresh leaves of C. ternatea were collected from various areas in AIMST University, Kedah, Malaysia in January 2011. The leaves were separated and cut into small pieces, which were first washed with tap water and then with distilled water. The leaves were then dried in an oven at 60 °C for 7 days, after which the dried leaves were ground into fine powder using a grinder.

Dried sample (approximately 100 g) was added to methanol (300 mL) and soaked for 4 days at room temperature (30 ± 2 °C). The suspension was stirred from time to time to allow the leaf powder to fully dissolve in the methanol. Removal of the sample from the solvents was done by filtration through cheesecloth followed by filter paper (Whatman No. 1); the filtrate was concentrated under vacuum to one-fifth its volume using a rotary evaporator at 60 °C and then sterilized by filtration using a 0.22-mm membrane. The thick paste obtained was further dried in an oven at 40 °C. The resultant extract was kept at 4 °C for further analysis. The methanol was used for the extraction in this study to mimic the usage of water by the traditional healers to prepare plant extract as a decoction. Water and methanol have the highest polarity in the polar protic solvent group. Moreover, the usage of methanol makes the process of evaporation easier compared to water.

2,2-Diphenyl-1-picrylhydrazyl radical (DPPH) scavenging assay quantitative measurement of radical scavenging activity (RSA) was carried out in a universal bottle. The reaction mixture contained test sample (50 μL) ranging in concentration from 0.5 mg/mL to 6 mg/mL and 0.004 w/v % DPPH solution in methanol (5 mL, 80% v/v). The mixture without test sample was used as blank and spiked with blank methanol (50 μL). The commercial antioxidants butylated hydroxytoluene (BHT, Sigma) and vitamin E were used for comparison or as a positive control. Discoloration was measured at 517 nm after incubation for 30 min. Measurements were taken in triplicate. The DPPH radical concentration was calculated using the following equation: DPPH scavenging effect (%) = A0 − A1/A0 × 100 where A0 is control absorbance and A1 is the absorbance in the presence of the sample (mushroom extract) [21]. The actual decrease in the absorbance induced by the test sample was compared with the positive controls.

The IC50 was defined as the amount of the sample that is sufficient to elicit 50% reduction of the initial DPPH radical concentration. This was calculated from the linear part of the inhibition of DPPH radical [22].

The amount of total flavonoid in the C. ternatea leaf extract was measured spectrophotometrically following method described by Djeridane et al. [24]. Catechin was used as standard to construct a calibration curve. Various concentrations of C. ternatea leaf extract (1.5 mL) were mixed with of 2% methanolic AlCl3 solution (1.5 mL). After incubation at room temperature for 15 min, the absorbance of the reaction mixture was measured at 430 nm. The flavonoids content was expressed as mg catechin equivalents (CE) in 1 g extract (mg CE/g).

Eighteen specific pathogen free and age-matched (7- to 10-week-old) male Wister albino mice were used to study the hepatoprotective activity of the C. ternatea leaf extract. The Institution Animal Ethics Committee of AIMST University has approved the animal study for this project. The animals were kept at 27 ± 2 °C, relative humidity 44–56% and light and dark cycles of 10 and 14 h respectively, for a week before and during the experiments. Animals were provided with standard diet (Lipton, India) and water ad libitum. The food was withdrawn 18–24 h before starting the experiment. All experiments were performed in the morning according to current guidelines for the care of the laboratory animals and the ethical guidelines for the investigation of experimental pain in conscious animals [25].

Paracetamol tablets were obtained from a nearby clinic. Each tablet contains 500 mg of paracetamol. The dose administered to the mice to induce hepatotoxicity was set as 1 g/kg. The paracetamol was turned into a fine powder using a mortar and pestle to increase the dissolution. The powdered paracetamol was suspended in saline and was administered orally according to the body weight of mice.

3.7.3. Grouping of Mice and Treatments

The liver was removed carefully after euthanizing and killing the animals by cervical dislocation. The livers were fixed in 10% buffered formalin. After fixation, the livers were dehydrated in a graded series of alcohol, cleared in xylene and embedded in paraffin wax. Multiple 5 μm sections from each block were mounted on slides and stained with hematoxylin and eosin.

The mice of each group were anaesthetized with ether, and blood was collected directly from the heart. It was centrifuged at 2,000 g for 10 min at 4 °C to separate the serum and kept at 4 °C to assay the activities of serum enzymes. Aspartate aminotransferase (AST) and alanine aminotransferase (ALT) were determined by the method described by Reitman and Frankel, [28]. Serum bilirubin level was estimated according to Malloy and Evelyn [29].

All values are mean ± S.E.M. obtained from six animals. For statistical analysis, one-way ANOVA with Duncan’s variance (SPSS 15) was used to compare the groups. In all the cases a difference was considered significant when p < 0.05.

© 2011 by the authors; licensee MDPI, Basel, Switzerland. This article is an open access article distributed under the terms and conditions of the Creative Commons Attribution license ( http://creativecommons.org/licenses/by/3.0/).