Studies on the Synthesis of DMAP Derivatives by Diastereoselective Ugi Reactions

The anti-inflammatory and anticancer activities of a methanol extract of the rhizome of Cnidium officinale were investigated. Four compounds, namely falcarindiol (1), 6-hydroxy-7-methoxy-dihydroligustilide (2), ligustilidiol (3), and senkyunolide H (4) were isolated from the extract of the rhizome of Cnidium officinale and their structures were elucidated by analysis of their spectroscopic data and by comparison with previously reported data. These compounds showed anti-inflammatory activities, measured as inhibition of nitric oxide (NO) release in lipopolysaccharide (LPS)-stimulated RAW 264.7 macrophage cells, with IC50 values of 4.31 ± 5.22, 152.95 ± 4.23, 72.78 ± 5.13, and 173.42 ± 3.22 μM, respectively. They also inhibited inducible nitric oxide synthase (iNOS) and cyclooxygenase-2 (COX-2) mRNA expression induced by LPS. Among these compounds, falcarindiol (1) was found to have anti-proliferative effect against MCF-7 human breast cancer cells by induction of a G0/G1 cell cycle block of the cells, with an IC50 value of 35.67 μM. Typical apoptotic effects were observed by phase contrast microscopy and were also exhibited in fluorescence microscopy with Hoechst 33342 staining. In addition, falcarindiol induced apoptosis through strongly increased mRNA expression of Bax and p53, and slightly reduced Bcl-2 mRNA levels in a dose dependent manner. This study suggested that C. officinale extract and its components would be valuable candidates in therapeutic applications for anti-inflammatory and anti-cancer agents. View Full-Text
Keywords: nitric oxide synthase (NOS); cyclooxygenase-2 (COX-2); Bax; p53, Bcl-2; falcarindiol nitric oxide synthase (NOS); cyclooxygenase-2 (COX-2); Bax; p53, Bcl-2; falcarindiol
►▼ Show Figures 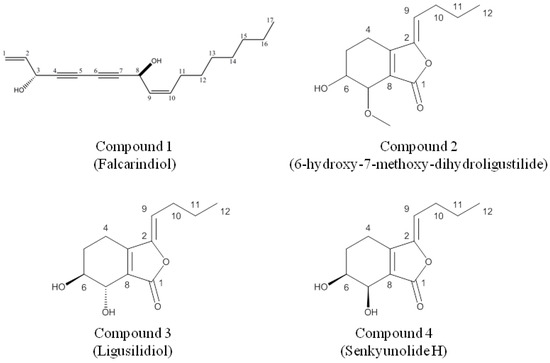