The Biosynthesis of Artemisinin (Qinghaosu) and the Phytochemistry of Artemisia annua L. (Qinghao)
Previous Article in Journal

Flavonoids from Artemisia annua L. as Antioxidants and Their Potential Synergism with Artemisinin against Malaria and Cancer

Artemisia annua is currently the only commercial source of the sesquiterpene lactone artemisinin.Since artemisinin was discovered as the active component of A. annua in early 1970s, hundreds of papers have focused on the anti-parasitic effects of artemisinin and its semi-synthetic analogs dihydroartemisinin, artemether, arteether, and artesunate. Artemisinin per se has not been used in mainstream clinical practice due to its poor bioavailability when compared to its analogs. In the past decade, the work with artemisinin-based compounds has expanded to their anti-cancer properties. Although artemisinin is a major bioactive component present in the traditional Chinese herbal preparations (tea), leaf flavonoids, also present in the tea, have shown a variety of biological activities and may synergize the effects of artemisinin against malaria and cancer. However, only a few studies have focused on the potential synergistic effects between flavonoids and artemisinin. The resurgent idea that multi-component drug therapy might be better than monotherapy is illustrated by the recent resolution of the World Health Organization to support artemisinin-based combination therapies (ACT), instead of the previously used monotherapy with artemisinins. In this critical review we will discuss the possibility that artemisinin and its semi-synthetic analogs might become more effective to treat parasitic diseases (such as malaria) and cancer if simultaneously delivered with flavonoids. The flavonoids present in A. annua leaves have been linked to suppression of CYP450 enzymes responsible for altering the absorption and metabolism of artemisinin in the body, but also have been linked to a beneficial immunomodulatory activity in subjects afflicted with parasitic and chronic diseases. View Full-Text
Keywords: Artemisia annua; artemisinin;flavonoids; antimalarial; anticancer; synergism Artemisia annua; artemisinin;flavonoids; antimalarial; anticancer; synergism
►▼ Show Figures 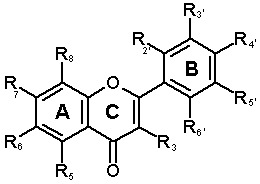