Leaves and bark infusions Anacardium humile St. Hil. (Anacardiaceae), known as in Brazil as “cajuzinho do cerrado”, have been used in folk medicine as an alternative treatment for ulcers and gastritis. This study evaluated the gastroprotective activity of an ethyl acetate extract of the leaves of A. humile (AcF) and the mechanism involved in this gastroprotection. Pretreatment concentrations (50, 100, 200 mg.kg−1) were administered by gavage. Following a 60 min. period, all the rats were orally administered 1 mL of absolute ethanol. One hour after the administration of ethanol, all groups were sacrificed, and the gastric ulcer index was calculated. Prostaglandin PGE2 concentration, gastric adherent mucous, and the participation of nitric oxide (NO) and sulfhydryl compounds in the gastroprotection process were also analyzed using the most effective tested dose (50 mg·kg−1). A histological study of the glandular stomach for the evaluation of the epithelial damage and mucus content was also performed. AcF significantly reduced the gastric damage produced by ethanol. This effect was statistically significant for the 50 mg·kg−1 group compared to control. Also, it significantly increased the PGE2 (by 10-fold) and mucous production, while pretreatment with NG-nitro-L-arginine methyl ester (L-NAME) or N-ethylmaleimide (NEM) completely abolished the gastroprotection. AcF has a protective effect against ethanol, and this effect, might be due to the augmentation of the protective mechanisms of mucosa. View Full-Text
Keywords: Anacardium humile; antiulcer activity; cytoprotection; medicinal plants Anacardium humile; antiulcer activity; cytoprotection; medicinal plants
►▼ Show Figures 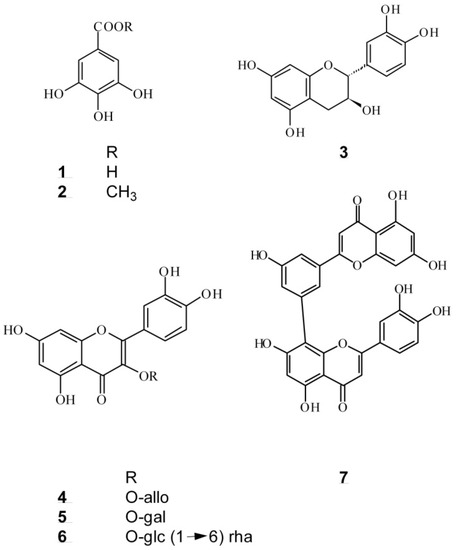