β-Adrenoceptors are among the most thoroughly studied members of the G protein-coupled receptors (GPCRs), the largest signaling family of the human genome. β-Adrenergic receptors have been subdivided into at least three distinct groups: β1, β2 and β3 [1], found predominately in cardiac muscle, airway smooth muscle and adipose tissue, respectively. Stimulation of β2-adrenoreceptor induces relaxation of the bronchiolar, improvement of mucociliary clearance and inhibition of extravasation of plasma proteins [2]. Therefore, β2-agonists are the first-line drugs for treatment of asthma and chronic obstructive pulmonary disease (COPD).
To avoid unwanted β-adrencoptor mediated effects like tachycardia, hypokalemia or muscle tremors, the sub-type specificity of the human β-receptors is considered as one of the main aspects in development of β2-agonists [3]. During the past decades, a lot of selective β2-agonists have been well developed [4]. To simplify the management of asthma and COPD, there has been a renewed interest in the development of β2-adrenoceptor agonists with long duration of action [5]. The key interactions between the β2-adrenoceptor and agonists were identified by a combination of site-directed mutagenesis and molecular modeling. The protonated nitrogen atom formed an ion pair with the carboxylate side chain of Asp113 in transmembrane (TM) 3 [6]. The catechol mimic interacted with Ser203, Ser204 and Ser207 on TM5 [7,8], and the benzylic alcohol bound to the chirally discriminating Asn293 on TM6 [9]. Besides, Tyr308 on TM7 was identified to interact with the amino-substituents of formoterol and salmeterol [10].
Until 2007, no X-ray structures of the human β2-adrenoreceptor had been reported [11,12,13]. Since then, many researchers have devoted themselves to the discovery of novel chemical classes targeting the β2-adrenergic receptor [14,15,16,17,18]. In the case of β2-agonists, biophysical studies revealed that a single small ligand could induce at least two kinetically and functionally distinct conformational states [19]. For an inactive state, the crystal structure of β2-adrenoceptor bound to the inverse agonist carazolol was unsuitable to directly find the pharmacophoric features for the binding of agonists in the absence of crystal packing effects.
The increasing knowledge of the β2-adrenoceptor structure, activity and the mode of interaction between receptor and agonists, is giving momentum to the development of computational models, such as a pharmacophore. Pharmacophore modeling has been one of the important and successful ligand-based approaches for new drug discovery in the last few years [20,21,22]. A pharmacophore hypothesis collects common features distributed in three-dimensional space representing groups in a molecule that participate in important interactions between drug and active site [23].
Since there is no literature concerning pharmacophore modeling for β2-agonists, we collected several selective β2-agonists with long duration of action to construct selective pharmacophore model to shed more light on the chemical features which might contribute to the β2-adrenogic receptor agonistic activity.

The HipHop module within Catalyst is the common features hypotheses generation program which is widely used in ligand-based approaches to rational drug design [24]. HipHop attempts to derive a pharmacophore based on features that are common to active molecules. The constructed 3D pharmacophore model can be used for identiﬁcation of original lead compounds from a database [25,26].
Based on the published literature, we selected a series of potent and selective β2-agonists (Figure 1) to generate a pharmacophore model. These compounds were taken from different literature sources [10,27,28,29,30,31,32,33,34,35,36,37,38,39,40], and the activity values were measured in various systems. In addition, due to limited structural diversity, qualitative HipHop pharmacophore modeling was performed based on the collected β2-agonists. 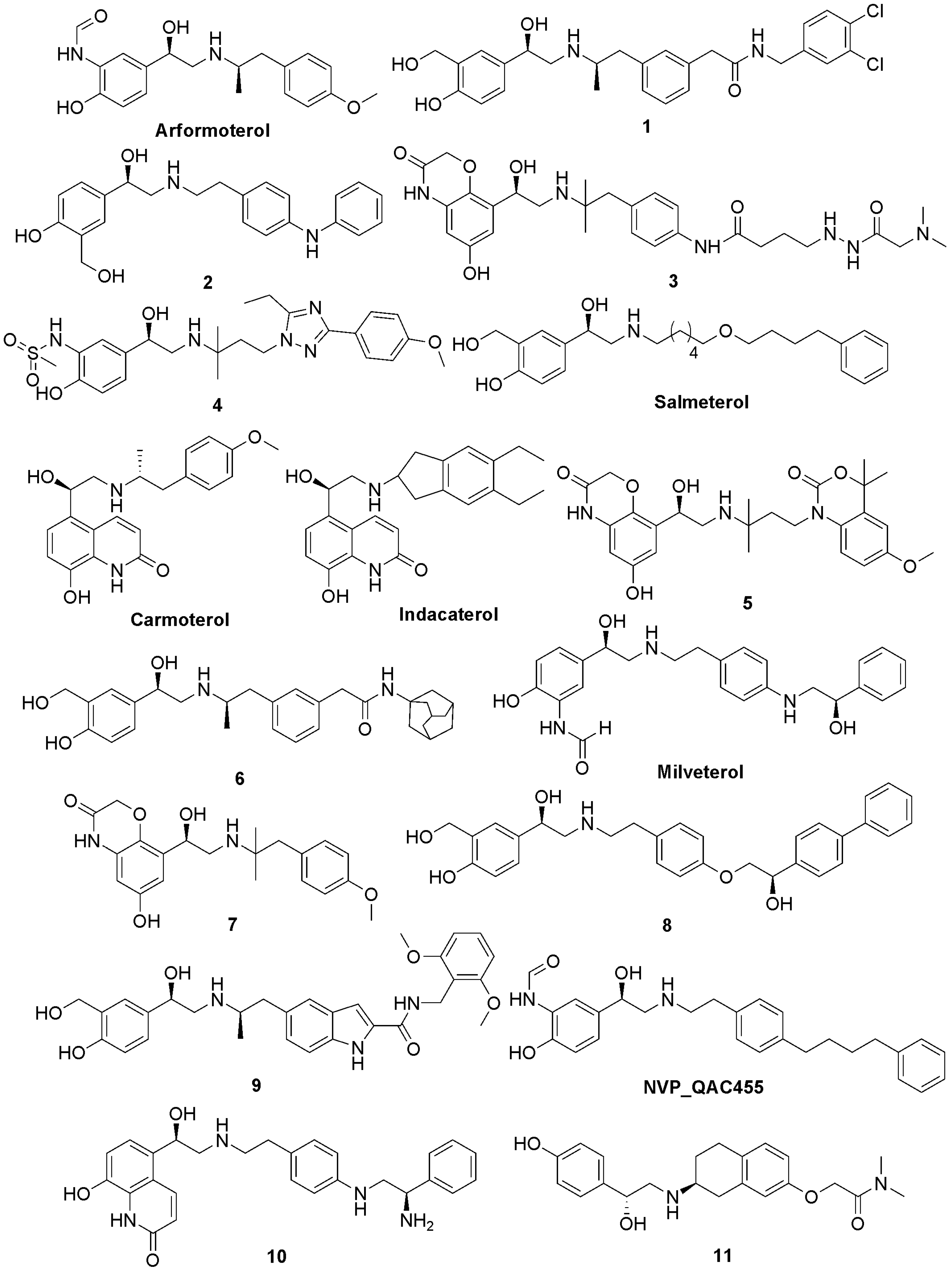 Finally ten pharmacophore hypotheses were automatically generated with alignment scores ranging from 232.507 to 240.129. (Table 1) The best hypothesis (referred to as Hypo1_I) was found to be associated with a five point pharmacophore containing one hydrogen-bond acceptor (A), one hydrogen-bond donor (D), two ring aromatic (R) and one positive ionizable feature (P). It was denoted as RRPDA and is depicted in Figure 2 showing the 3D space and distance between pharmacophoric sites.
Table 1. The results of the top 10 hypotheses for β2-adrenoreceptor agonists generated by the HipHop program.

The alignment of the most potent compound arformoterol onto Hypo1_I is shown in 3A. It was revealed that one hydrogen-bond acceptor and one hydrogen-bond donor matched the 3-formamido group on the benzene ring and the benzylic alcohol, respectively. One positive ionizable feature was at the protonated nitrogen atom and the two ring aromatic features are located in the mother ring and amino-substituents. All the pharmacophores were located in the proximity, which was in good agreement with the key interactions between the β2-adrenoceptor and agonists.
Table 2. The information about the alignment of β2-adrenoreceptor agonists onto Hypo1_I.

Molecular field-based similarity analysis with the FieldTemplater software provided the necessary three-dimensional molecular field properties of the β2-adrenoceptor agonists. FieldTemplater took three β2-adrenoceptor agonists (arformoterol, salmeterol and indacaterol), optimally aligned their conformer fields and yielded a series of templates which were ranked according to an incorporated score. The top-ranking multi structural template (T1) from FieldTemplater is shown in Figure 4. Four types of 3D molecular field descriptors were produced for describing electrostatic (negative and positive), van der Waals and hydrophobic properties of the β2-adrenoceptor agonists. As shown in the field point patterns (large points indicating strong interactions), it was abundant in hydrophobic fields along the amino-substituents, positive ionic fields surrounding protonated nitrogen atoms (strong interactions) and para-positions of aromatic ring and negative fields near the meta-positions of aromatic rings (strong interactions) and surrounding the benzylic hydroxyl group. This pharmacophore shared enough similar features with Hypol_I and they were almost consistent. The results reflected the validity of the pharmacophore model Hypol_I. 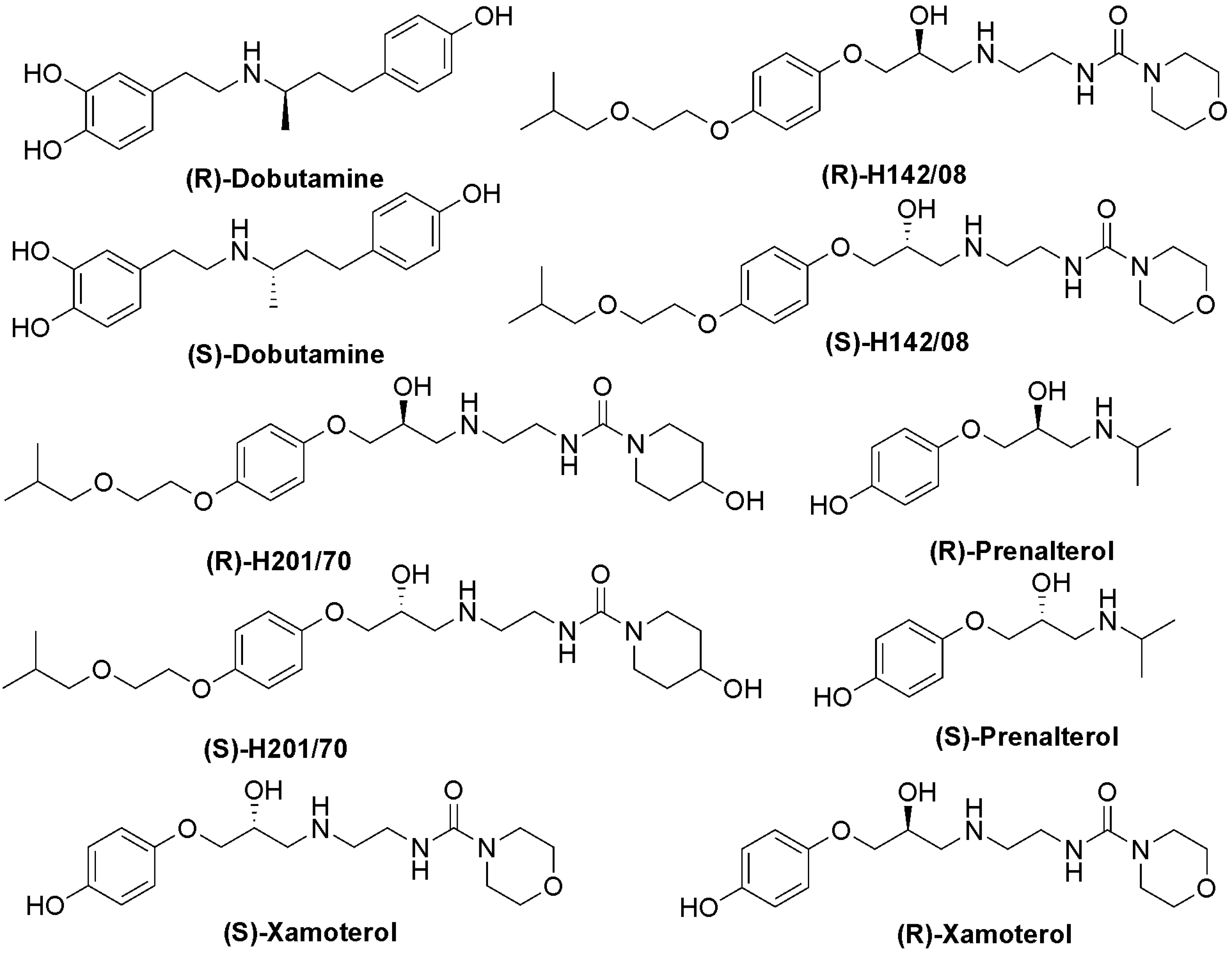 To test the selectivity of pharmacophore over β1-adrenoceptor, several selective β1-adrenoceptor agonists (Figure 5) were collected and aligned with the Hypol_I model. As a result, no β1-adrenoceptor agonists could map the features using the Hypol_I model, except for dobutamine. The fit values for (R)-dobutamine and (S)-dobutamine were only 0.803 and 1.528, respectively. The alignment of (R)-dobutamine and (S)-dobutamine onto the pharmacophore is shown in Figure 3B, Figure 3C. It was found that the mapping could not match the hydrogen-bond donor and one ring aromatic feature encoded in Hypol_I. According to this partial mapping, it suggested this hydrogen-bond donor and one ring aromatic feature on the N-substituent might be the key areas for the differentiation of β2-agonists from β1-agonists. It has been reported that the substituent on the amino portion was important for subtype selective agonist binding [41], which further validated our phamacophore. In summary, it may be concluded that our pharmacophore model for β2-agonists could predict the sub-type specificity of the human β-receptors.
Molecular docking has established itself as a valuable in silico technique alongside traditional high-throughput screening (HTS) for discovering new active compounds in the pharmaceutical industry. However, virtual screening of large databases via docking is expensive in terms of CPU-time, especially for GPCRs where the protein conformation changes upon binding with different ligands (ligand-induced fit). Therefore, pharmacophore models can be used as a first-screen before docking studies. Our pharmacophore model for β2-adrenergic receptor agonists can be used for virtual screening of new potent and selective candidates targeting the β2-adrenergic receptor.

A common-features pharmacophore model was derived with the HipHop module of Catalyst. All molecules were built in 2D Visualizer using the Discovery Studio software package and the nitrogen atom of aliphatic amine in each structure was protonated. Arformoterol was considered as ‘reference compound’ specifying a ‘Principal’ value of 2 and a ‘MaxOmitFeat’ value of 0, meaning its structure and conformation would have the strongest influence in the model building phase. The ‘Principal’ value and ‘MaxOmitFeat’ value for the remaining compounds were set to 1 and 0, respectively. Diverse conformational models for each compound were generated using the ‘best conformational analysis’ method and an energy threshold of 20 kcal/mol above the global energy minimum for conformation searching. The maximum number of conformers for each molecule was specified as 250 to ensure maximum coverage of the conformational space. Due to the basic structures of the compounds, five kinds of features including hydrogen-bond acceptor (A), hydrogen-bond donor (D), hydrophobic group (H), positive ionizable (P) and ring aromatic (R) features were selected to initiate the pharmacophore hypotheses generation process.

Using the XEDEX software, a conformational search was performed with the XED force field. Three β2-adrenoceptor agonists (arformoterol, salmeterol and indacaterol) were submitted to the FieldTemplater software for generation of putative bioactive field template [42,43]. FieldTemplater overlaid the field patterns of all conformers of these compounds to find a single common field pattern assumed to reflect the binding requirements for the β2-adrenoreceptor agonists.

The β1-agonists were built in 2D Visualizer using Discovery Studio software package and the nitrogen atom of aliphatic amine in each structure was protonated. Diverse conformational models for each compound were generated using the ‘best conformational analysis’ method and an energy threshold of 20 kcal/mol above the global energy minimum for conformation searching. A flexible fitting method was adopted to map these β1-agonists with Hypol_I.

In summary, we have presented the first study using a ligand-based computational approach to generate specific 3D pharmacophore hypotheses for the β2 aderonergic receptor from its selective agonists. The best hypothesis with a five point pharmacophore was consistent with the interactions between the β2-adrenoceptor and agonists, and it was further validated by molecular field-based similarity analysis with FieldTemplater. Moreover, the best pharmacophore hypothesis could perfectly differentiate β2-agonists from β1-agonists, so this pharmacophore model may be considered a valuable tool to predict agonist activity and identify diverse structures with desired biological activity and selectivity by 3D virtual screening.

This work was supported by the National High Technology Research and Development Program of China (863 Program, 2005AA233030). The authors would like to thank Cresset BioMolecular Discovery Ltd. for kindly allowing us a free evaluation of their software packages.

© 2009 by the authors; licensee Molecular Diversity Preservation International, Basel, Switzerland. This article is an open access article distributed under the terms and conditions of the Creative Commons Attribution license ( http://creativecommons.org/licenses/by/3.0/).