(-)-Epicatechin-3-gallate, a Green Tea Polyphenol Is a Potent Agent Against UVB-induced Damage in HaCaT Keratinocytes
Previous Article in Special Issue

The enterohepatic circulation of bile acids is one of the most efficient recycling routes in the human body. It is a complex process involving numerous transport proteins, which serve to transport bile acids from the small intestine into portal circulation, from the portal circulation into the hepatocyte, from the hepatocyte into the bile, and from the gall bladder to the small intestine. The tremendous transport capacity and organ specificity of enterohepatic circulation combined with versatile derivatization possibilities, rigid steroidal backbone, enantiomeric purity, availability, and low cost have made bile acids attractive tools in designing pharmacological hybrid molecules and prodrugs with the view of improving intestinal absorption, increasing the metabolic stability of pharmaceuticals, specifically targeting drugs to organs involved in enterohepatic circulation, as well as sustaining therapeutically reasonable systemic concentrations of active agents. This article briefly describes bile acid transport proteins involved in enterohepatic circulation, summarizes the key factors affecting on the transport by these proteins, and reviews the use of bile acids and their derivatives in designing prodrugs capable of exploiting the bile acid transport system. View Full-Text
Keywords: Bile acids; Prodrugs; Active Transport; Carrier-Mediated Transport; Drug Targeting Bile acids; Prodrugs; Active Transport; Carrier-Mediated Transport; Drug Targeting
►▼ Show Figures 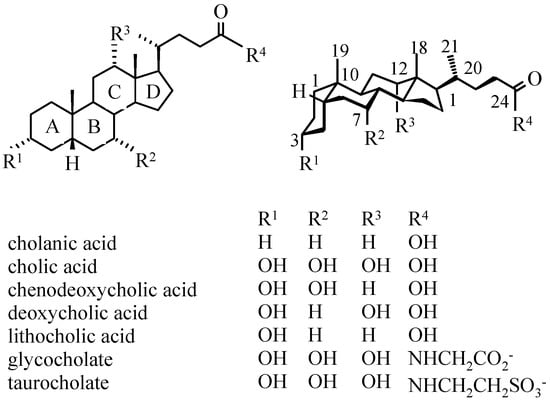