Models of consciousness are usually developed within physical monist or dualistic frameworks, in which the structure and dynamics of the mind are derived from the workings of the physical brain. Little attention has been given to modelling consciousness within a mental monist framework, deriving the structure and dynamics of the mental world from primitive mental constituents only—with no neural substrate. Mental monism is gaining attention as a candidate solution to Chalmers’ Hard Problem on philosophical grounds, and it is therefore timely to examine possible formal models of consciousness within it. Here, I argue that the austere ontology of mental monism places certain constraints on possible models of consciousness, and propose a minimal set of hypotheses that a model of consciousness (within mental monism) should respect. From those hypotheses, it would be possible to construct many formal models that permit universal computation in the mental world, through cellular automata. We need further hypotheses to define transition rules for particular models, and I propose a transition rule with the unusual property of deep copying in the time dimension. View Full-Text
Keywords: idealism; consciousness; Hard Problem; automata theory; mental models idealism; consciousness; Hard Problem; automata theory; mental models
►▼ Show Figures 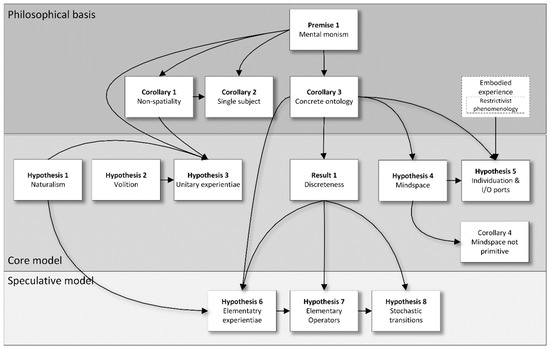