We review the experimental evidence, from both historic and modern literature of thermodynamic properties, for the non-existence of a critical-point singularity on Gibbs density surface, for the existence of a critical density hiatus line between 2-phase coexistence, for a supercritical mesophase with the colloidal characteristics of a one-component 2-state phase, and for the percolation loci that bound the existence of gaseous and liquid states. An absence of any critical-point singularity is supported by an overwhelming body of experimental evidence dating back to the original pressure-volume-temperature (p-V-T) equation-of-state measurements of CO2 by Andrews in 1863, and extending to the present NIST-2019 Thermo-physical Properties data bank of more than 200 fluids. Historic heat capacity measurements in the 1960s that gave rise to the concept of “universality” are revisited. The only experimental evidence cited by the original protagonists of the van der Waals hypothesis, and universality theorists, is a misinterpretation of the isochoric heat capacity Cv. We conclude that the body of extensive scientific experimental evidence has never supported the Andrews–van der Waals theory of continuity of liquid and gas, or the existence of a singular critical point with universal scaling properties. All available thermodynamic experimental data, including modern computer experiments, are compatible with a critical divide at Tc, defined by the intersection of two percolation loci at gaseous and liquid phase bounds, and the existence of a colloid-like supercritical mesophase comprising both gaseous and liquid states. View Full-Text
Keywords: gas-liquid; critical point; supercritical fluid; supercritical mesophase; universality hypothesis gas-liquid; critical point; supercritical fluid; supercritical mesophase; universality hypothesis
►▼ Show Figures 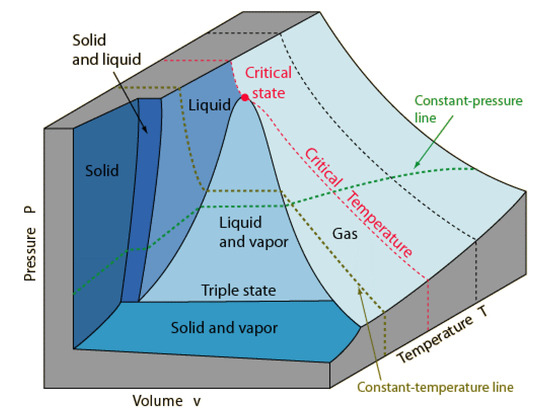