The Meta-Dynamic Nature of Consciousness

Deep Neural Networks (DNNs) are often examined at the level of their response to input, such as analyzing the mutual information between nodes and data sets. Yet DNNs can also be examined at the level of causation, exploring “what does what” within the layers of the network itself. Historically, analyzing the causal structure of DNNs has received less attention than understanding their responses to input. Yet definitionally, generalizability must be a function of a DNN’s causal structure as it reflects how the DNN responds to unseen or even not-yet-defined future inputs. Here, we introduce a suite of metrics based on information theory to quantify and track changes in the causal structure of DNNs during training. Specifically, we introduce the effective information (EI) of a feedforward DNN, which is the mutual information between layer input and output following a maximum-entropy perturbation. The EI can be used to assess the degree of causal influence nodes and edges have over their downstream targets in each layer. We show that the EI can be further decomposed in order to examine the sensitivity of a layer (measured by how well edges transmit perturbations) and the degeneracy of a layer (measured by how edge overlap interferes with transmission), along with estimates of the amount of integrated information of a layer. Together, these properties define where each layer lies in the “causal plane”, which can be used to visualize how layer connectivity becomes more sensitive or degenerate over time, and how integration changes during training, revealing how the layer-by-layer causal structure differentiates. These results may help in understanding the generalization capabilities of DNNs and provide foundational tools for making DNNs both more generalizable and more explainable. View Full-Text
Keywords: artificial neural networks; causation; information theory artificial neural networks; causation; information theory
►▼ Show Figures 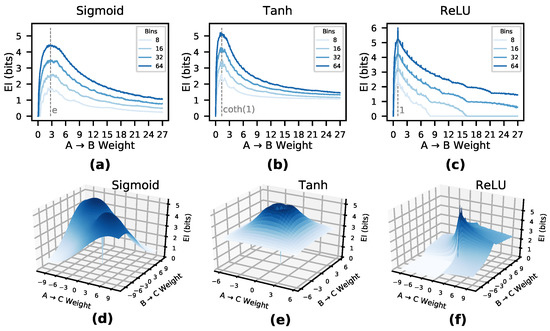