Bit-level and pixel-level methods are two classifications for image encryption, which describe the smallest processing elements manipulated in diffusion and permutation respectively. Most pixel-level permutation methods merely alter the positions of pixels, resulting in similar histograms for the original and permuted images. Bit-level permutation methods, however, have the ability to change the histogram of the image, but are usually not preferred due to their time-consuming nature, which is owed to bit-level computation, unlike that of other permutation techniques. In this paper, we introduce a new image encryption algorithm which uses binary bit-plane scrambling and an SPD diffusion technique for the bit-planes of a plain image, based on a card game trick. Integer values of the hexadecimal key SHA-512 are also used, along with the adaptive block-based modular addition of pixels to encrypt the images. To prove the first-rate encryption performance of our proposed algorithm, security analyses are provided in this paper. Simulations and other results confirmed the robustness of the proposed image encryption algorithm against many well-known attacks; in particular, brute-force attacks, known/chosen plain text attacks, occlusion attacks, differential attacks, and gray value difference attacks, among others. View Full-Text
Keywords: image encryption; modular addition; scrambling plus diffusion (SPD); SHA-512; security; entropy image encryption; modular addition; scrambling plus diffusion (SPD); SHA-512; security; entropy
►▼ Show Figures 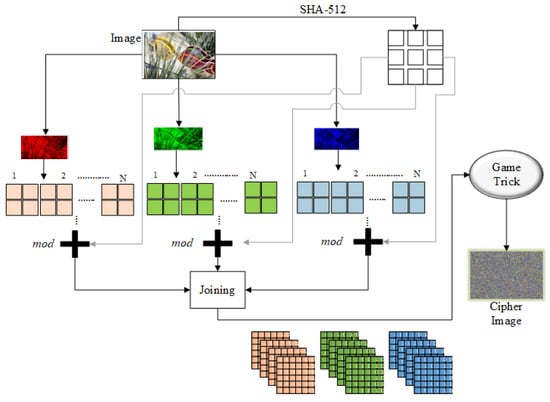