Towards Quantum-Secured Permissioned Blockchain: Signature, Consensus, and Logic
Next Article in Special Issue

In this paper, the security analysis of an image chaotic encryption algorithm based on Latin cubes and bit cubes is given. The proposed algorithm adopts a first-scrambling-diffusion- second-scrambling three-stage encryption scheme. First, a finite field is constructed using chaotic sequences. Then, the Latin cubes are generated from finite field operation and used for image chaotic encryption. In addition, according to the statistical characteristics of the diffusion image in the diffusion stage, the algorithm also uses different Latin cube combinations to scramble the diffusion image for the second time. However, the generation of Latin cubes in this algorithm is independent of plain image, while, in the diffusion stage, when any one bit in the plain image changes, the corresponding number of bits in the cipher image follows the change with obvious regularity. Thus, the equivalent secret keys can be obtained by chosen plaintext attack. Theoretical analysis and experimental results indicate that only a maximum of plain images are needed to crack the cipher image with resolution. The size of equivalent keys deciphered by the method proposed in this paper are much smaller than other general methods of cryptanalysis for similar encryption schemes. View Full-Text
Keywords: image chaotic encryption; cryptography; Latin cube; bit cube; chosen plaintext attack image chaotic encryption; cryptography; Latin cube; bit cube; chosen plaintext attack
►▼ Show Figures 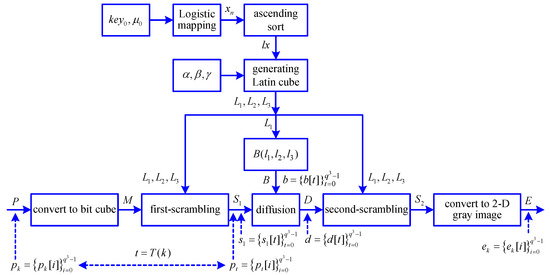