We study the time series of the output intensity of a Raman fiber laser with an ordinal patterns analysis in the laminar-turbulent transition. We look for signatures among consecutive events that indicate when the system changes from triggering low-intensity to high-intensity events. We set two thresholds, a low one and a high one, to distinguish between low intensity versus high-intensity events. We find that when the time series is performing low-intensity events (below the low threshold), it shows some preferred temporal patterns before triggering high-intensity events (above a high threshold). The preferred temporal patterns remain the same all through the pump current range studied, even though two clearly different dynamical regimes are covered (laminar regime for low pump currents and turbulent regime for high pump currents). We also find that the turbulent regime shows clearer signatures of determinism than the laminar regime.
Keywords: forecasting; complex dynamics; fiber laser; chaos; ordinal patterns forecasting; complex dynamics; fiber laser; chaos; ordinal patterns

Besides the innumerable technological applications, lasers are a fascinating tool for the study and characterization of nonlinear dynamics in a laboratory-controlled manner [1]. Being able to generate and control complex dynamics with lasers has been important for studying and understanding chaos [2,3], stochastic and coherent resonance [4,5], rogue waves [6], for generating encrypted communications with chaos [7], for developing subwavelength position sensing protocols [8], or developing neuro-inspired optical devices for computation [9,10,11].
One particular case of a laser manifesting complex dynamics is the Raman fiber lasers with optical feedback [12]. The light amplification of these lasers involves nonlinear interactions of millions of longitudinal cavity modes. This leads to a highly complex dynamics in the output intensity of the laser. In previous studies [13,14], it was found that behind the high complexity of the time series of the output intensity of the fiber laser, the system showed some structure that could be unveiled using an ordinal patterns analysis. It was found that the laser executes some preferred intensity and temporal patterns, and those patterns helped to detect a laminar to turbulent transition as the pump power of the laser was increased [12,13]. In [14], through a simple mathematical model and an ordinal patterns analysis, it was also seen that the transition was related to internal frequencies of the dynamics.
In this paper, we use the ordinal patterns analysis to study the complex behavior of the output intensity of the fiber laser, to forecast when the laser is changing from emitting low-intensity light to emit high-intensity light. The ordinal patterns analysis allows finding temporal or intensity correlations in a highly complex time series. These correlations reveal memory signatures in the dynamics of the system that can be related to the structure of the phase space. Our goal is to characterize the changes in the magnitude of the events to be able to statistically forecast when low magnitude events trigger high magnitude events.
Forecasting high magnitude or extreme events is of great importance in many fields, from brain behavior to earthquakes, electronic circuits, or stock markets [15,16,17,18,19]. Because each dynamical system has intrinsic features, different statistical tools have to be used for each system. In [20], the authors used the ordinal patterns analysis to forecast extreme events in the time series generated with the Lang–Kobayashi [21,22] model to simulate a diode laser with current injection. They analyzed intensity correlations and found that some preferred patterns took place before the system triggered one extreme event. In [23], the authors analyzed the experimental times series of a low-power diode laser submitted to optical feedback in the low-frequency fluctuations regime, close to the lasing threshold of the laser (below 1 mW). They analyzed the temporal correlations of the events and also found some preferred patterns happening before a change from low- to high-intensity events and from high- to the low-intensity events. In this later work, the preferred patterns were different from those in the former.
Our work extends the range of applicability of the method to high-power Raman fiber laser (powers around 1 W). We show that the method also unveils signatures in the complex dynamics of the system under study. We find preferred patterns that precede high-intensity events. The fact that the likelihood of some patterns reaches 70% in some cases, while only about 10% in other cases, suggests a very deterministic behavior before a high-intensity event is triggered. These patterns can be helpful in forecasting events in the complex dynamics of a Raman fiber laser in the laminar and turbulent regimes.

The ordinal patterns analysis method (OPAM) was introduced by Bandt and Pompe in 2012 [24] and studies correlations between consecutive events. It allows computing the permutation entropy of the dynamical system by calculating the probabilities of different patterns in the time series. It defines the patterns by comparing the values of n consecutive events in a time series (either magnitudes or time intervals between events) and computes the probabilities of each of the possible patterns. The permutation entropy reveals information on the complexity of each time series, but studying the probabilities of the different ordinal patterns allows us to extract information about the underlying structure of the dynamics. For a purely-stochastic process, where no correlations exist between events, one would expect to find all patterns equally probable (), while for systems that present some intensity or temporal correlation, one would expect some structure in the probabilities of the patterns. This method has been used to characterize complex dynamics based on the patterns’ probabilities [25,26,27,28], to distinguish between stochasticity and determinism [29], or to identify transitions in the dynamics of complex networks [30]. In a recent paper [23], the method was used to classify events into two types and to forecast when the system decides to change from one type of event to the other one.
The OPAM transforms the original series of m events, , into a series of patterns. To do so, it considers n consecutive events, assigns them correlative integer numbers (0, 1, 2, ..., n), and then orders them from smaller to larger values of the event. For example, for dimension , if , it labels that pattern as 01; if , it labels that pattern as 10. For dimension , we have six possible patterns (), i.e., if , it labels that pattern as 012; is 021.
This can be applied to the actual values of the events (), the magnitudes in the time series, but it can also be applied to the time intervals between events (). The former would give us information about intensity correlations among consecutive events, while the latter about temporal correlations.
For the fiber laser under study, both intensity and temporal correlations were found (see Figure 2a,b from [13]), where some patterns were more likely to happen in the time series. The fact that the OPs are not equally probable means that the dynamics is not compatible with a stochastic process, but it is clearly deterministic. The system showed a higher degree of determinism at the laminar-turbulent transition.

We have studied the dynamics of the output light of a Raman fiber laser with feedback in the laminar-turbulent transition. By using an ordinal patterns approach, we have found signatures of determinism in its dynamics that allow us to forecast high-intensity events, defined as events larger than a threshold (). The system presents preferred patterns before it changes from low-intensity events to more extreme events. The preferred pattern before an extreme event is the one where the latter of three consecutive low-intensity events is larger than the previous two, with probabilities that reach 80% in some cases, while the less probable pattern is the one where the latter event is less intense than the previous two events, which in some cases reaches less than 10%.
We can compute the patterns with the intensity of the events or with the inter-event time-intervals. The former takes advantage of intensity correlations in the system, while the latter of temporal correlations, both being present in the dynamics. In this system, the more efficient way to compute the patterns for forecasting purposes is with the actual intensity of the events. For patterns computed with inter-event time-intervals, the probabilities, although still not compatible with a stochastic process, are lower and therefore less efficient to forecast the more extreme events.
The fact that there is higher probability of pattern XX2 before a sudden increase in intensity has to be considered carefully, as there are much fewer events that are higher than than events below . This does not mean that of all XX2 patterns will be followed by a high-intensity event, but that of high-intensity events are preceded by pattern XX2.
One interpretation for this preference for specific patterns when the system leaves the low-intensity regime and explores the higher intensity regime is that there is a specific region in phase space that triggers extreme events, and those patterns are the signature of that region in phase space.
Our analysis covered the laminar-turbulent transition in the Raman fiber laser. In a previous work, the OPAM had been shown to be an efficient tool to characterize this transition, and a sharp decrease of entropy was found right at the transition, with respect to the well-developed laminar or turbulent regimes. Our current work has found that, despite having clear, preferred forecasting patterns, these are the same all through the pump current range (laminar, transition, and turbulent). This suggests that the temporal and intensity correlations found are a signature of the structure of the phase space and not related to the particular features of each of the regimes.
We have also found that the forecasting signatures of the system are higher in the turbulent regime than in the laminar regime. The more complex dynamics of the turbulent regime facilitates the appearance of structures in the dynamics that help identify sharp changes from low-intensity to high-intensity events.
This work is also in agreement with the previous work, where also the hierarchy of ordinal patterns found did not change. However, the fact that the preferred patterns in both cases are different (all the patterns in the time series on the one hand versus those forecasting a low-high event change) indicates that the system visits a different region of phase space when a change from a low-intensity event to a high-intensity event is happening.
This methodology can be applied to other complex dynamical systems that manifest time series of events, with a long-tail histogram.

This work was supported in part by the Carleton College Towsley Endowment. 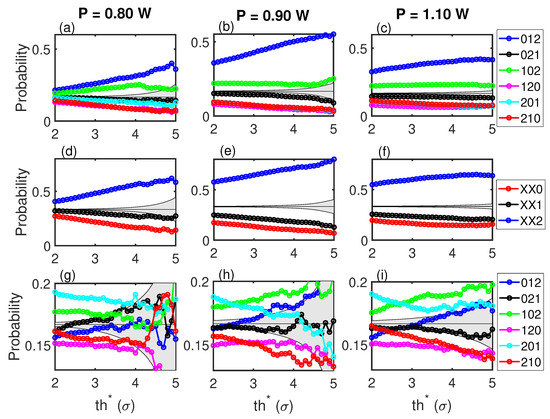 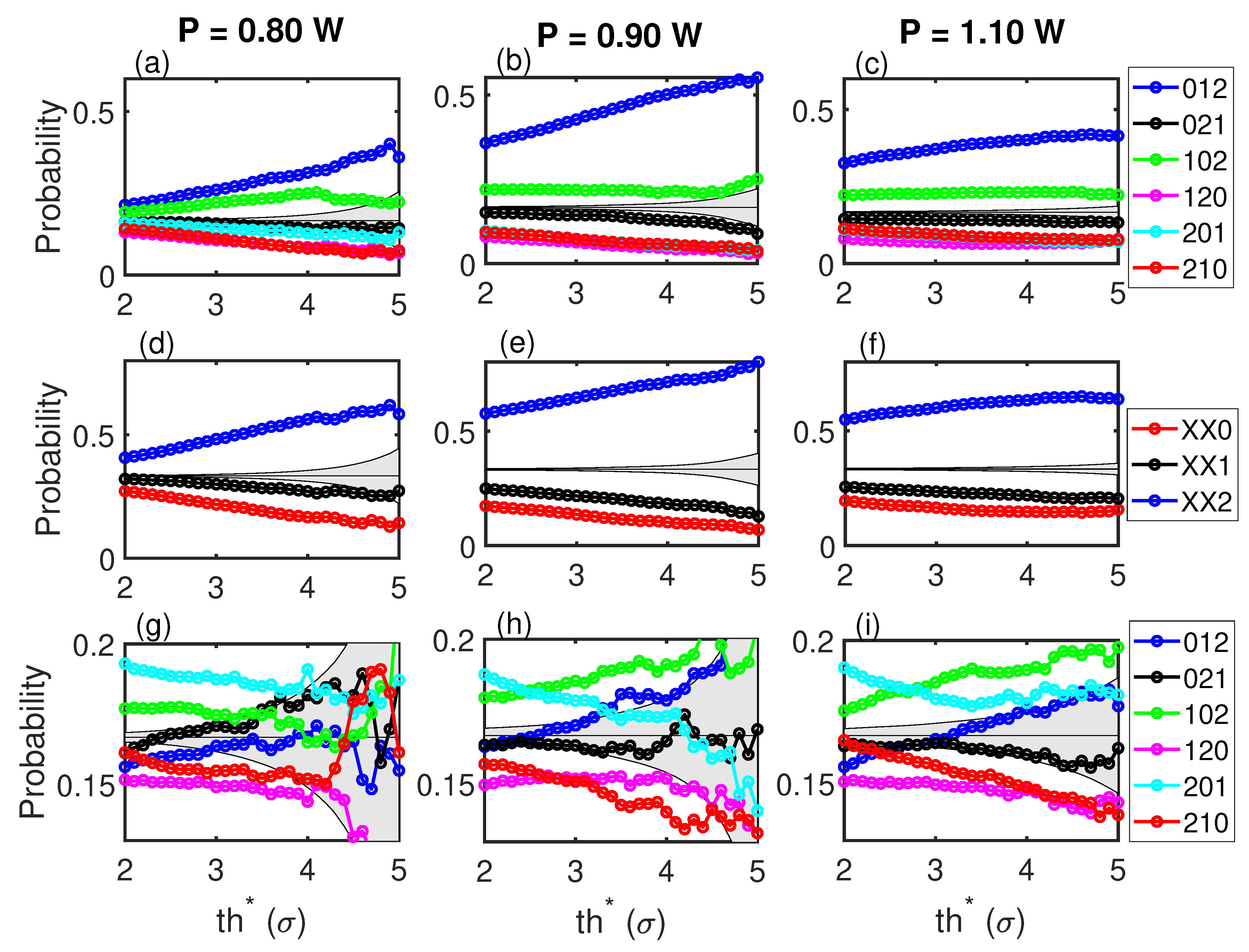 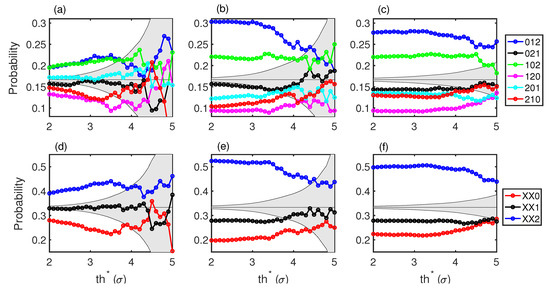 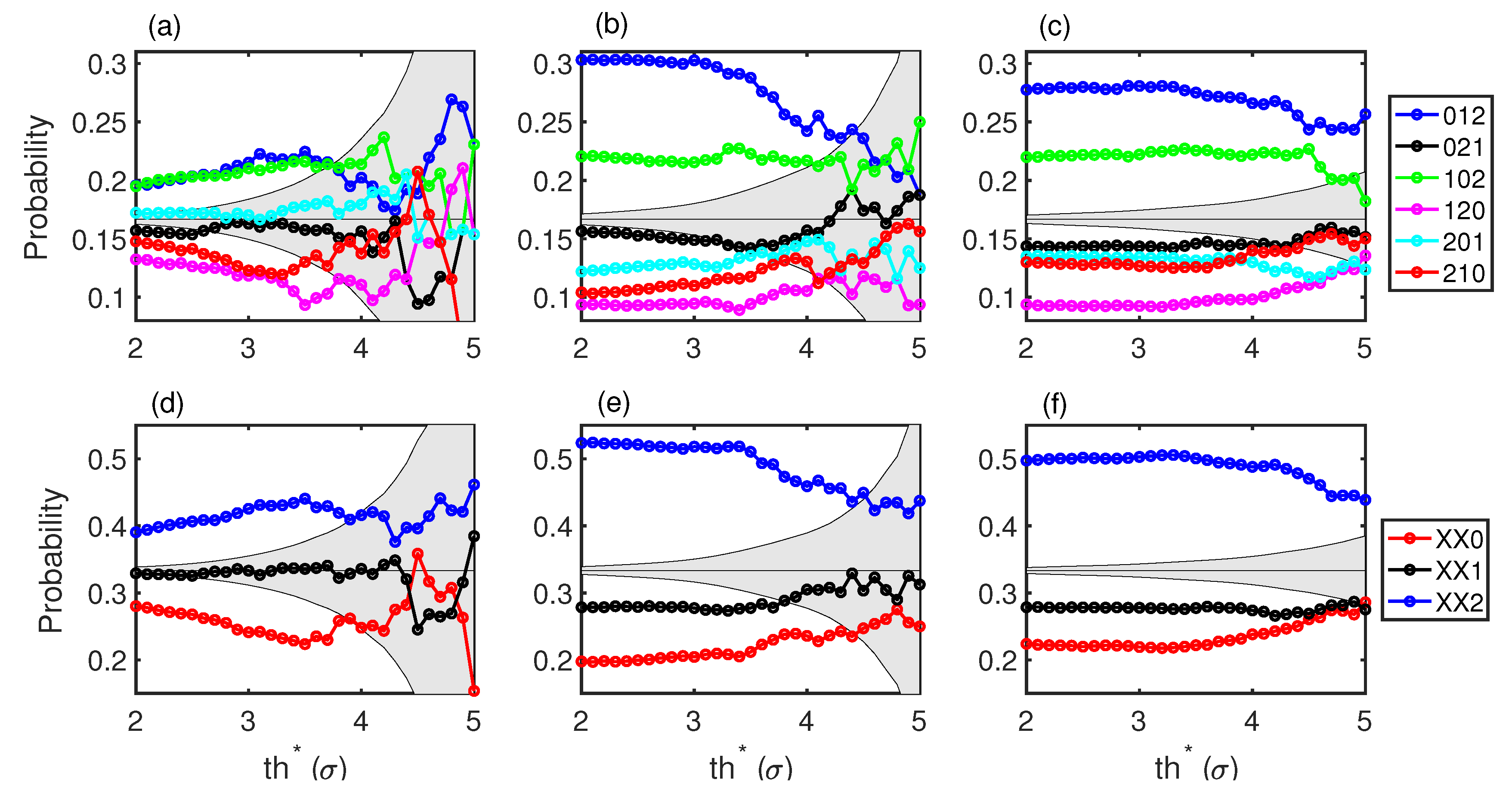 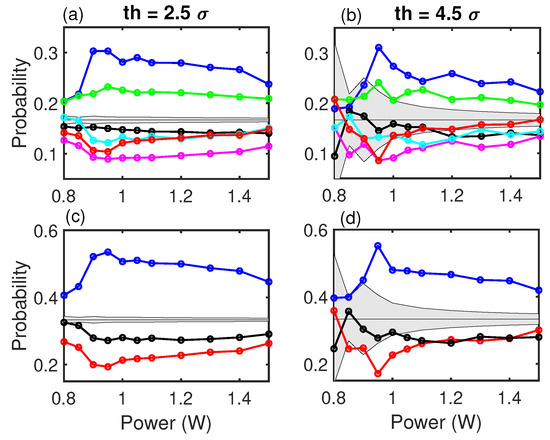 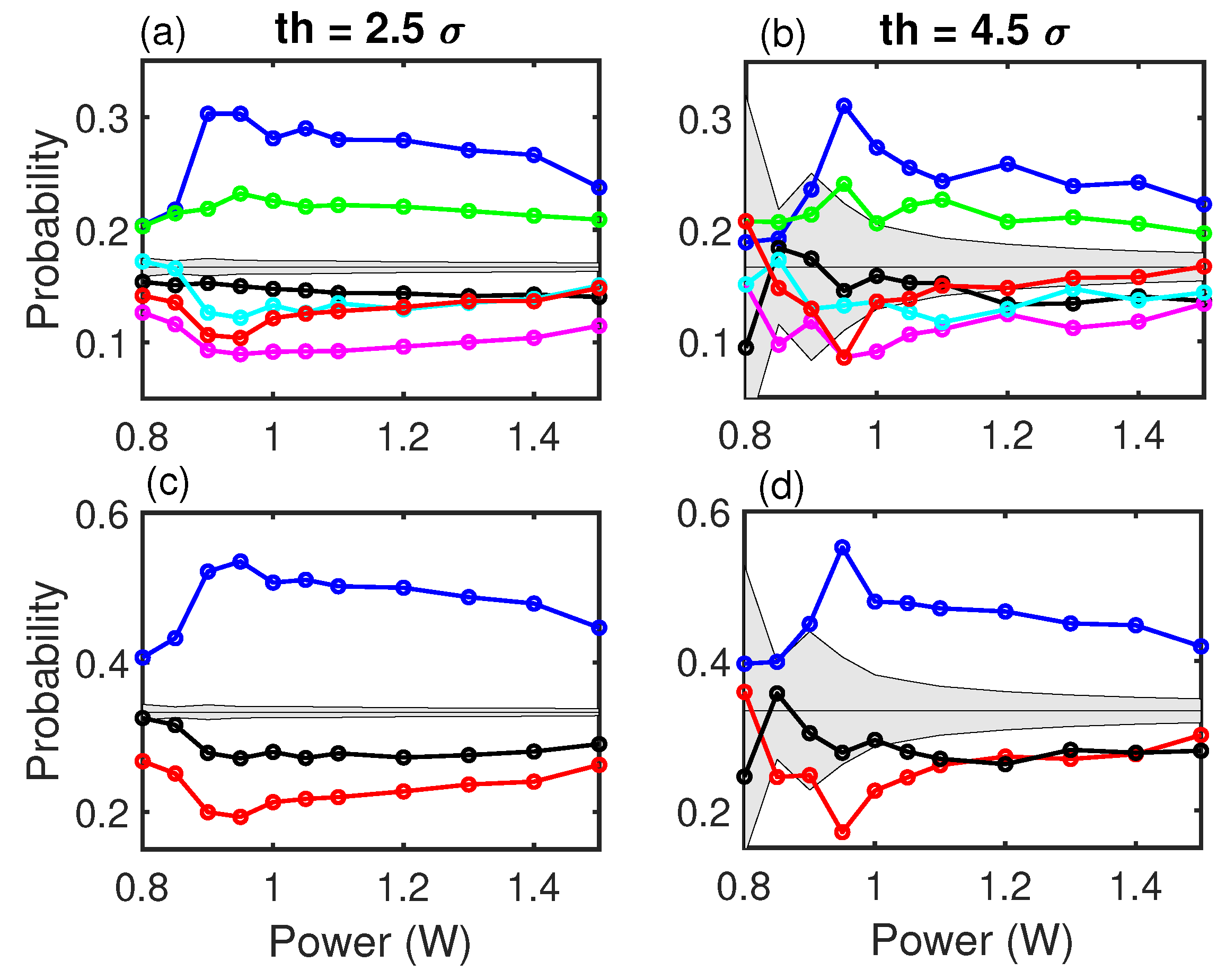