Transients as the Basis for Information Flow in Complex Adaptive Systems

Information is the fundamental currency of naturally occurring complex adaptive systems, whether they are individual organisms or collective social insect colonies. Information appears to be more important than energy in determining the behavior of these systems. However, it is not the quantity of information but rather its salience or meaning which is significant. Salience is not, in general, associated with instantaneous events but rather with spatio-temporal transients of events. This requires a shift in theoretical focus from instantaneous states towards spatio-temporal transients as the proper object for studying information flow in naturally occurring complex adaptive systems. A primitive form of salience appears in simple complex systems models in the form of transient induced global response synchronization (TIGoRS). Sparse random samplings of spatio-temporal transients may induce stable collective responses from the system, establishing a stimulus–response relationship between the system and its environment, with the system parsing its environment into salient and non-salient stimuli. In the presence of TIGoRS, an embedded complex dynamical system becomes a primitive automaton, modeled as a Sulis machine.
Keywords: information; semantics; salience; complex adaptive systems; transients; TIGoRS; Sulis machines information; semantics; salience; complex adaptive systems; transients; TIGoRS; Sulis machines

2. The Role of Transients in NOCS

The first two conditions arise because we are dealing with the transient orbits of systems rather than individual states, and so they are necessary to maintain consistency and timing.
Definition of Computation in Dynamical Automata:
Let A = (Y(IT), Ω(IT), Δ), be a dynamical automata. An instance of an information process is a pair P = (WQ, WR), where WQ is an open, bounded subset of termed the question, and WR is an open, bounded subset of Y(IT), termed the response. The automaton A processes P weakly if there exists states ψ Y(IT), ρ ∈ WQ, and ϕ ∈ WR, such that . The automaton A processes P effectively if there exists an open, bounded subset , and a subset , such that . The automaton A processes P strongly if there exists a subset , such that . The automaton A processes P error free if .
The open sets of the dynamical automaton provide a formal analogue of the concept of behavior in psychology. These sets consist of correlated spatio-temporal transients, just as behaviors consist of spatio-temporal transients generated by an entity, linked by some criteria which may be structural or functional.
Transients appear to play a role in information processing in the collectives of agents, such as social insect colonies. They play a role in the dynamics of individuals as well. Freeman [26], in his pioneering study of mesoscopic brain dynamics, emphasized the role of transience, and therefore of transients, in information processing in the brain. He was particularly interested in the role that chaotic dynamics and strange attractors might play in such information processing. His seminal work showed the existence and importance of chaotic dynamics within the brain. Based upon extensive studies of sensory processing in insects, he conjectured that information processing might involve a succession of transitions between strange attractors, each of which correspond to patterns of behaviors that are associated with particular meanings. The time spent within each strange attractor, being finite, resulted in the generation of a spatio-temporal transient. Information processing is observed in the succession of these spatio-temporal transients, determined by the sequence of shifts between the strange attractors. Interactions with the environment trigger these shifts among the strange attractors, and the resulting spatio-temporal transients (behaviors) exhibit consistency in either the structure or functionality reflective of meaning. All of this complexity arises in an emergent manner from the underlying neurodynamics. The dynamical automaton provides a simplified model of these dynamics.

At first glance, the idea that transients play a fundamental role in information processing seems almost obvious, at least to anyone with even a passing awareness of biology and psychology. Every behavioral act constitutes a spatio-temporal transient. The life of an organism is expressed in a never-ending succession of finite duration, spatially limited, behavioral acts. These behavioral acts show consistency in relation to particular environmental events, which are thought to elicit them. They show much less consistency when compared one to another without reference to their environment.
It is remarkable then, that virtually no attention is paid to the role of transients in the formal study of information and computation, and of dynamical systems more generally. Dynamical systems are generally studied in isolation, as closed systems. The environment appears either as a small random perturbation or as a periodic, predictable stimulus. Long term, asymptotic behavior is the focus of study. Transient behavior is dismissed as the uninteresting behavior which precedes the appearance of the interesting asymptotic behavior. The components, if any, of a dynamical system are considered to be fixed, as is the phase space within which the dynamics play out. Identical initial conditions result in identical behavior. Nearly identical initial conditions result in nearly identical behavior (stability), or when instability occurs, it generally has a structured form (chaos).
The discussion of a NOCS shows how removed from the reality of natural behaving systems these dynamical systems models are. NOCS are complex multi-agent adaptive systems. Their dynamics is emergent from interactions among their constituents and their environment. They are open systems in the extreme in that matter, energy, and information are in constant flux. The NOCS fundamental constituents change in composition, form, and network structure over time. Behaviors that appear identical at the emergent level may be generated in entirely different ways at the constituent level. Initial conditions that appear identical at the emergent level may result in very different emergent level behaviors, or in behaviors that appear similar in the large, but differ in the small, or which subserve the same functionality. Adaptation may result in repeated stimuli eliciting different responses depending upon what has happened in between their presentations. On the other hand, some responses may be remarkably robust and recur regardless of what intervenes. Thus, the stability of the responses is dependent upon the stimulus. Asymptotic behavior is irrelevant, since the environment is constantly changing. Moreover, NOCS possess agency and they act to change the environment themselves, often to satisfy particular needs and facilitate particular functions.
Novel concepts, such as dynamical automata, functional constructivism, di-evolution, and process algebra are directed at correcting the serious shortcomings in the standard dynamical systems models. Dynamical automata and Sulis machines represent a first step in directly addressing the role of transients in information flow in the complex systems. The discovery of TIGoRS, and its realization in a wide range of dynamical models (tempered neural networks, driven cellular automata, cocktail party automata, dispositional cellular automata, coupled map lattices) shows the ubiquity of the phenomenon. In TIGoRS, there need be no synchronization of activity between the individual constituents on a state by state basis. Instead, the synchronization is between a transient representing an environmental stimulus and the global response from the system. It is a correspondence between spatio-temporal transients, not between the individual states. Moreover, TIGoRS can occur even though the actual stimulus is a random, low frequency sampling of the environmental transient, such that the individual constituents receiving the stimulus vary from trial to trial. Even more, TIGoRS can occur even though the constituents possess different dynamics themselves, and these dynamics change as a result of experience (as in the case of the cocktail party and dispositional cellular automata). In the transient scenario, we see exactly the kinds of openness (or contextuality), emergence, generativity, and fungibility as seen in the NOCS.
The simple experiments of TIGoRS in the dispositional cellular automata showed that TIGoRS is a genuine nonlinear effect in these complex systems, and not merely an epiphenomenon of the stimulation process. Whether the TIGoRS phenomenon can serve as a viable model for information flow in a NOCS requires further investigation, both theoretical, as well as empirical. There is a need to explain theoretically how it is that TIGoRS arises in these open systems—what determines it, how to characterize it, how to quantify it. There is a need for more simulations, but this is hampered by the sheer combinatorial complexity associated with transients. The pattern space for even 450 time step transients of the kind used in this study was vast, (2100)450 possible patterns. There were 256100 possible rule configurations per time step, and so (256100)450 rule trajectories. Simulations clearly cannot explore the totality of such a space, but theory guided explorations can shed considerable light on the mechanisms that are involved in TIGoRS. Meanwhile, the naturalistic observation of NOCS, especially collective intelligence and neural systems, might demonstrate whether or not TIGoRS like phenomena occur in these systems, as well as their prevalence.
An interesting question posed by an anonymous referee was whether or not there was any role for entropy in TIGoRS. In several papers [27,28,29], a variety of different stimulus patterns were sampled during these trials. Different complex systems models appeared to respond to different symmetry types. In some cases, patterns with very high levels of symmetry induced TIGoRS. These were low entropy patterns. In other cases, complex, chaotic, or even pseudorandom patterns induced TIGoRS. These were all high entropy patterns. It was not clear whether there is any relationship between the entropy of a pattern and its ability to induce TIGoRs, or the entropy of a pattern generated by an autonomous complex system and that of the patterns that induce TIGoRS in it. This would seem to be an interesting area for future study. 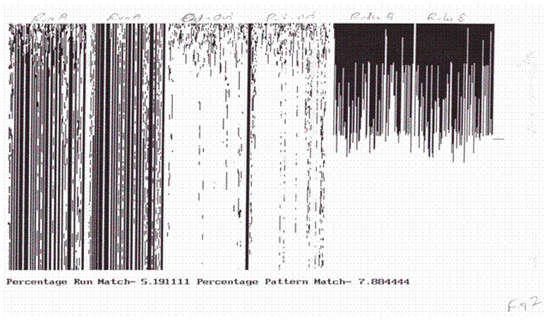 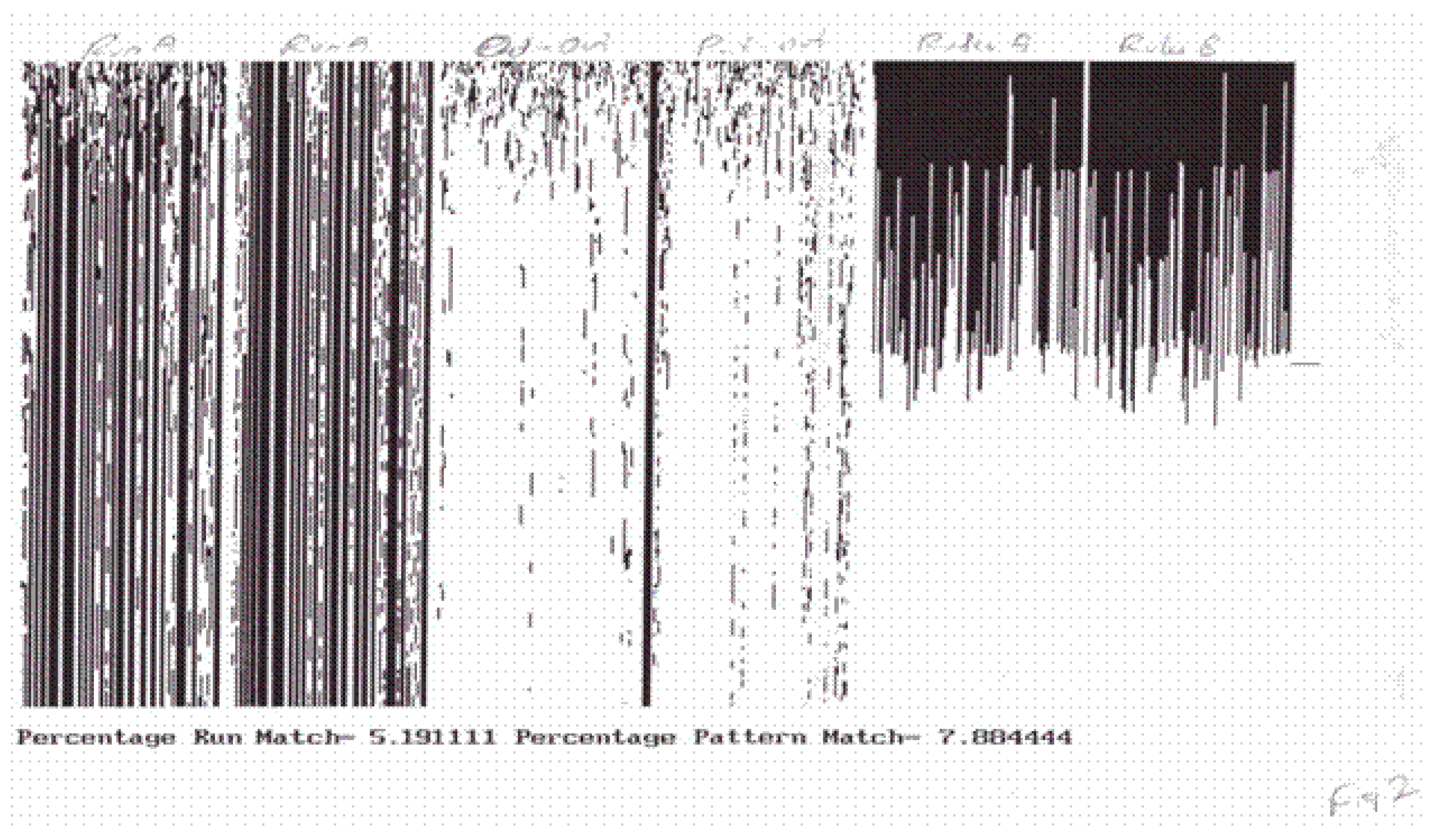